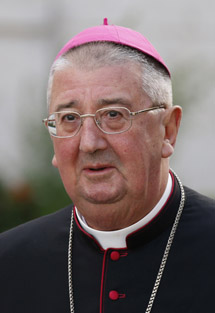 Archbishop Diarmuid Martin of Dublin is seen at the Vatican in this Oct. 22, 2015, file photo. (CNS photo/Paul Haring)

VATICAN CITY (CNS) — The 2018 World Meeting of Families in Ireland is part of a broad program of renewal of the church’s pastoral care for all families, said Archbishop Diarmuid Martin of Dublin.

“In Pope Francis’ mind, the IX World Meeting of Families in Dublin is not an isolated event. It belongs within a process of discernment and encouragement, of accompaniment and animation of families,” he said during a news conference at the Vatican May 24.

“It belongs within a program of renewal of the church’s pastoral concern and pastoral care for the family and for families,” he said.

Archbishop Martin and Archbishop Vincenzo Paglia, president of the Pontifical Council for the Family, presented the official theme of the encounter, which is held every three years.

The meeting’s preparation and celebration will be inspired in large part, Archbishop Paglia said, by Pope Francis’ apostolic exhortation, “Amoris Laetitia” (“The Joy of Love”), which followed a two-year-long synod process focused on families.

The postsynodal document, he said, demands “not a simple updating of family pastoral care, but much more — a new way of living the church, a new way of fulfilling that love that renders the life of the people of God, of families and of society happy.”

Archbishop Martin said he hoped the meeting would be “an important milestone in the application of the fruits of the synodal process.”

Archbishop Paglia said having the meeting in Ireland, which is “marked by a delicate moment of transition,” will help the country “recover the strength, energy and missionary zeal through the rediscovery of the vocation and mission of the family.”

All Christian communities and members of other religious faiths need to work together with government and civil society to find common ground in a “family spirit,” he said, in order to tackle “that individualist dimension that unfortunately is increasingly embroiling religious and civil settings all over the world.”

The meeting is meant to highlight the Christian ideal of marriage and family life, as well as to be a resource to accompany and encourage all those who “who can’t achieve the Christian ideal” as of yet, Archbishop Paglia said in response to a reporter’s question.

It will be about “inclusivity,” he said, in tune with the pope’s approach in his ministry and the postsynodal document.

Archbishop Martin said in his talk that “the church’s catechetical programs regarding marriage and the family need a complete overhaul in line with what ‘Amoris Laetitia’ sets out,” and he hoped churches around the world would prepare for the Dublin meeting by sharing in that catechetical process.

The priority in planning is to look at what families are facing and, in Ireland, that includes great economic difficulties and a severe housing crisis. Some families in Dublin, he said, live in a hotel room “because there aren’t enough homes.”

The gathering is an opportunity to “encourage a very inclusive culture” for people who are struggling and want a more dignified life for themselves and their families, he said.

“In the face of the many challenges of a changing culture of marriage and the family, the church is called to accompany families in a new way and to enable families to experience more profoundly the joy of living the Gospel of the family,” he said.

“It is also vital that church and society commit themselves to enabling families to experience that joy more fully through appropriate political, social and economic measures which support families and help remove burdens which families face,” the Irish archbishop said.

At the news conference, Archbishop Martin again confirmed that Pope Francis would like to attend the meeting in Ireland in 2018, but he said a concrete schedule would be set closer to the actual date of the event.

The archbishop said it would be very important for the pope to visit Northern Ireland and bring to completion the 1979 historic pilgrimage of St John Paul II, when rising tensions in the North made a visit there impossible.

In Ireland, Anglican Archbishop Michael Jackson of Dublin called the 2018 meeting “an event of international proportions and of considerable significance right across society in general. Wherever people congregate and share lives, issues associated with family life, care and nurture are always to the fore.”

He pledged the church’s help to make it a success.

Contributing to this story was Michael Kelly in Dublin.