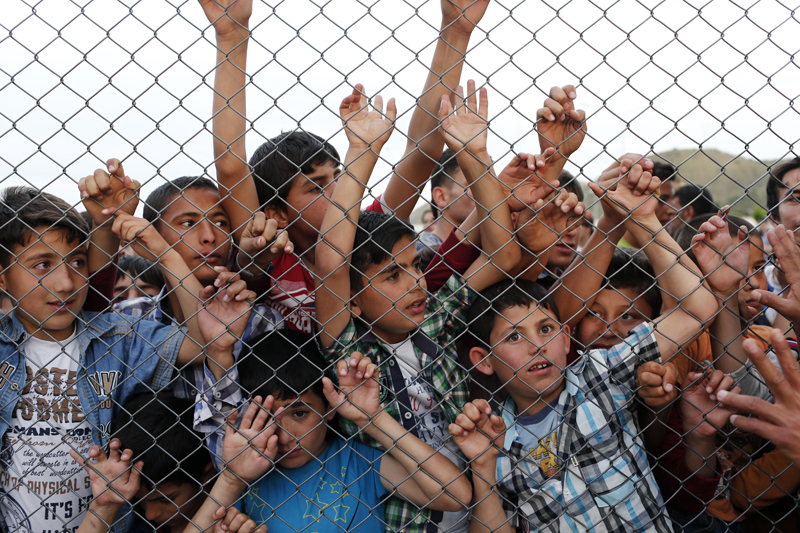 Syrian children stand at a fence April 23 at a refugee camp near Gaziantep, Turkey. Cardinal Vincent Nichols of Westminster, England, cheered Britain's decision to welcome some of the children under a new resettlement plan. (CNS photo/Sedat Suna, EPA)

MANCHESTER, England (CNS) — Cardinal Vincent Nichols of Westminster has welcomed a U-turn by the British government over the resettlement of child refugees.

He said he was “very happy” with a May 4 announcement by Prime Minister David Cameron that the U.K. will accept an unspecified number of unaccompanied children who arrived in the European Union from Syria.

Under pressure from Parliament, Cameron said the U.K. would not only take in 3,000 children from refugee camps in the Middle East, but that children registered in Greece, Italy or France before March 20, the date when an EU deal with Turkey to return migrants took effect, would also be eligible for resettlement in Britain.

The government will not take in migrant children who arrive after that date because it does not want to encourage human trafficking, the prime minister said.

In a May 4 statement, Cardinal Nichols, president of the Bishops’ Conference of England and Wales, expressed satisfaction that the government had struck the right balance.

“I am very happy that the government is extending an offer of sanctuary to a greater number of children fleeing conflict, while continuing to combat the evils of human trafficking,” said the cardinal.

“The U.K.’s response to the refugee crisis is improving the lives of thousands,” he added. “I encourage the Catholic community to keep on playing its part through working with local authorities, being generous with time and resources, and extending the hand of welcome to refugees arriving here.”

Days earlier, Cardinal Nichols had used a homily at an annual diocesan Mass for migrants to tell Catholics that they should protest against immigration policies that could put the lives of children at risk.

“While it is right to keep silent when children are asleep, it is never right to stay silent when they are perishing at sea or at risk in hostile camps,” Cardinal Nichols said at the May 2 Mass.

“From those who deal in creating fear of migrant people and who seek to profit from that fear, whether financially or politically, we ask for a more responsible leadership, a leadership that looks at all that we gain as well as the problems we confront,” the cardinal said.

Cardinal Nichols told the congregation that London “would not function” without the “great contribution” of its migrant communities. However, he suggested that new policies aimed at restricting immigration meant that the United Kingdom could not show greater hospitality to refugees even if its citizens wanted to.

In an allusion to the EU deal with Turkey to expel migrants, he criticized “international plans that often seem to treat people purely as problems or even as packages to be sent from place to place.”

“We hope that the way in which governments respond to the immense challenge which faces us will take more seriously the personal generosity of so many, in this country, too, who are willing to welcome refugees and desperate migrants and yet are hindered from doing so by policies shaped more by caution and fear,” he said.

“We hear reports of sadness, dismay, frustration, anger, rejection and humiliation: from Iraq and Jordan, to Libya and Calais,” he continued.

“Yes, this is ‘a vale of tears’ as both the Mediterranean and the Aegean Seas become, in the Holy Father’s words, graveyards for children, the elderly and their families,” he said.

Last year, migration from Africa, the Middle East and South Asia resulted in more than a million people arriving in Germany alone.

At the Vatican, top officials of the Council of European Bishops’ Conferences, known by the acronym CCEE, met with Pope Francis May 2 and heads of various dicasteries during their May 2-4 visit to Rome. The presidency members — a president and two vice presidents — were ending their five-year term this year.

Speaking to reporters May 3 at the Vatican, Hungarian Cardinal Peter Erdo of Esztergom-Budapest, CCEE president, said individual countries are facing the challenge of the immigration and refugee crisis. While the European continent as a whole must also come together to respond to the dilemma, each nation is in its own unique situation, which requires localized responses, he said.

“Therefore it’s necessary to patiently and perceptively examine the situation of each region in order to find a concrete Christian-Catholic response to the situations,” Cardinal Erdo said.

A blanket or mandatory solution is impossible, he said, not only because national laws are different, but because each nation faces a different challenge depending on whether it is a country of origin, transit or destination for refugees and forced migrants. So, for example, he said, a mandatory policy of integrating newcomers does not work if migrants do not want to stay in the so-called country of transit and to do so “would be a restriction on their freedom” to move.

Contributing to this story was Carol Glatz in Vatican City.

NEXT: Buddhists, Christians know eco-crisis is an ‘ego-crisis,’ cardinal says