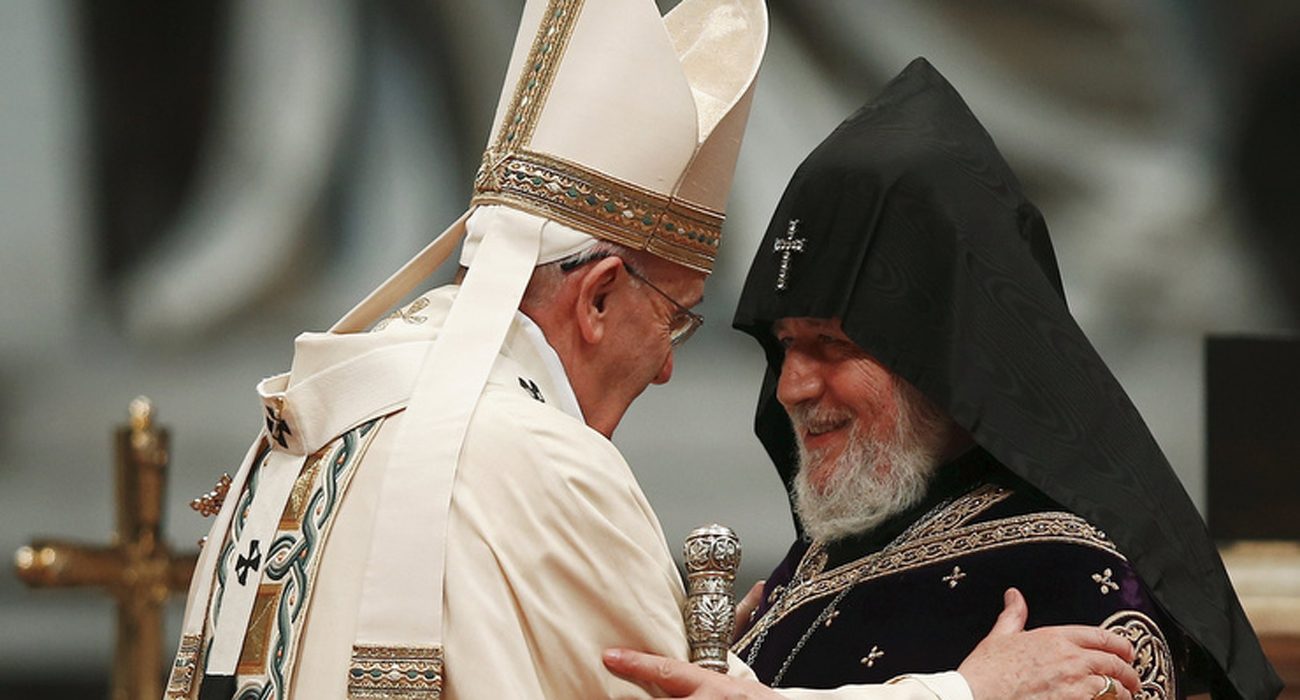 Pope Francis embraces Catholicos Karekin II, patriarch of the Armenian Apostolic Church, during a 2015 Mass in St. Peter's Basilica at the Vatican to mark the 100th anniversary of the Armenian genocide. Ecumenical relations, the memory of past suffering and prayers for a future of peace form the framework for Pope Francis' itinerary when he visits Armenia June 24-26. (CNS photo/Tony Gentile, Reuters)

VATICAN CITY (CNS) — Ecumenical relations, the memory of past suffering and prayers for a future of peace form the framework for Pope Francis’ itinerary when he visits Armenia June 24-26.

Following in the footsteps of St. John Paul II, who visited Armenia in 2001, Pope Francis will spend much of his time in the country as the guest of the majority Armenian Apostolic Church and will attend a divine liturgy celebrated by Catholicos Karekin II, the Orthodox patriarch, June 26.

Pope Francis, like St. John Paul, also is scheduled to visit the Tsitsernagaberd Memorial, a monument to the estimated 1.5 million Armenians killed by Ottoman Turks in 1915-18.

Before celebrating a Mass last year with Armenian Christians commemorating the deaths, Pope Francis referred to the killings as “genocide,” a term to which the Turkish government objects. Turkey called its ambassador back to Ankara where he stayed almost a year until the Vatican issued a clarifying statement welcoming the Turkish government’s commitment to opening its archives for study of “the tragic events of 1915.”

Here is the schedule, released by the Vatican May 13, for the pope’s trip to Armenia. All times are local, with Eastern Daylight Time in parentheses:

— 3:35 p.m. (7:35 a.m.) Visit and prayer at the Armenian Apostolic Cathedral in Etchmiadzin. Greetings by the catholicos and the pope.

— 6:30 p.m. (10:30 a.m.) Meeting with civil leaders and members of the diplomatic corps in the presidential palace. Speech by pope.

— 7 p.m. (11 a.m.) Ecumenical meeting and prayer for peace in Republic Square in Yerevan. Speech by catholicos and speech by pope.

— 10 a.m. (2 a.m.) Participation at the divine liturgy in the Armenian Apostolic Cathedral. Homily by catholicos. Greeting by pope. After the liturgy, the pope, catholicos and Catholic and Orthodox bishops will have lunch together at the apostolic palace.

NEXT: Marchers in Canada plead for lawmakers to drop assisted-suicide bill