Fatima facts: Vatican shepherds the flock away from conspiracy claims 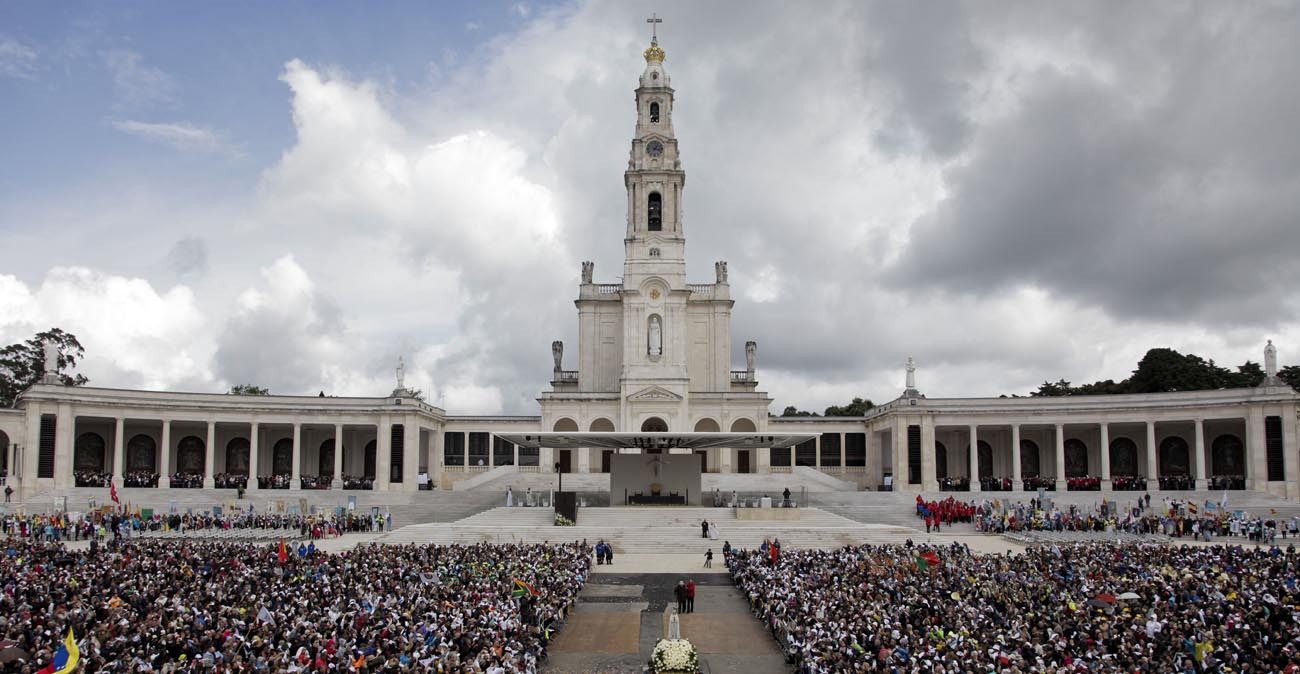 A statue of Our Lady of Fatima is carried through a crowd May 13 at the Marian shrine of Fatima in central Portugal. (CNS photo/Paulo Chunho, EPA)

VATICAN CITY (CNS) — When then-Cardinal Joseph Ratzinger met the press in 2000 for the formal release of the so-called Third Secret of Fatima, he said he knew many people would be disappointed.

Almost 16 years later, at the beginning of a yearlong preparation for the 100th anniversary of the apparition of our Lady of Fatima in 2017, now-retired Pope Benedict XVI is still dealing with people not convinced the secret is really out.

An online journal called OnePeterFive published an article May 15 claiming that shortly after then-Cardinal Ratzinger released the secret and his commentary, affirming that it was the complete text, he told a German priest that, in fact, it was not.

A statement released May 21 by the Vatican press office said Pope Benedict “declares ‘never to have spoken with Professor Dollinger about Fatima,’ clearly affirming that the remarks attributed to Professor Dollinger on the matter ‘are pure inventions, absolutely untrue,’ and he confirms decisively that ‘the publication of the Third Secret of Fatima is complete.'”

The Vatican’s publication of “The Message of Fatima” in 2000 included a photocopy of the text handwritten in 1944 by Carmelite Sister Lucia dos Santos, the last survivor of the three children who saw Mary at Fatima in 1917.

Speculation naturally swirls around secrets, and when a secret is held for decades, the assumptions gain ground and followers.

The common message of Marian apparitions throughout the centuries has been: pray and convert. But a message read only by a few popes and their closest aides? There had to be something more to it to justify keeping it so secret, many people thought.

When Cardinal Ratzinger presented the text in the Vatican press office June 26, 2000, he told reporters that the choice of St. John XXIII and Blessed Paul VI to withhold publication and St. John Paul II’s decision to delay it was not a “dogmatic decision but one of prudence.”

But, he said, “looking back, I would certainly say that we have paid a price” for the delay, which allowed the spread of apocalyptic theories about its contents.

Meeting the press that day, the first words out of his mouth were: “One who carefully reads the text of the so-called third secret of Fatima will probably be disappointed or surprised after all the speculation there has been.”

The text, he said, uses “symbolic language” to describe “the church of the martyrs of the century now past,” particularly the victims of two world wars, Nazism and communism.

But what was most difficult for many to believe after the secret spent more than 40 years in a Vatican vault was what the text did not contain. “No great mystery is revealed,” Cardinal Ratzinger said. “The veil of the future is not torn.”

In a 1996 interview with Portugal’s main Catholic radio station, the cardinal — who already had read the secret — tried the reasonable, tradition-based approach to pointing out what was and was not in the message. “The Virgin does not engage in sensationalism; she does not create fear,” he said. “She does not present apocalyptic visions, but guides people to her Son.”

Cardinal Ratzinger became Pope Benedict XVI five years after the text was published. If there was more to the secret, he had eight years of complete freedom as supreme pontiff to share what supposedly was withheld.

Marianist Father Johann Roten, a former student of then-Father Joseph Ratzinger who for years headed the Marian Research Institute at the University of Dayton, said there is “no doubt there is truth” in what many Fatima devotees see as “the moral decline in the church.”

“The difficulty is in the method” many of them choose to convince others of the need for conversion and prayer, Father Roten said in an email response to questions.

“The method tends to be magico-ritualistic, based on the conviction that a particular act,” such as the consecration of Russia performed in a particular way, “will solve all problems,” he said.

“Warnings are part of the message, not always, but especially in times of imminent social catastrophe,” including Fatima before the Russian Revolution, he said. “Unfortunately, these general messages are frequently overlooked. Instead the attention is given to sensationalism — a rosary turning golden — or apocalypticism — doomsday warnings — which never represent the essential part and reasons of such events.”

Speaking to reporters traveling with him to Fatima in 2010, Pope Benedict repeated what he had said 10 years earlier: The text was open to interpretation, but the heart of the Fatima message was a call “to ongoing conversion, penance, prayer and the three theological virtues: faith, hope and charity.”

Yes, he said, the church constantly is under attack — “attacks from within and without — yet the forces of good are also ever present and, in the end, the Lord is more powerful than evil and Our Lady is for us the visible, motherly guarantee of God’s goodness, which is always the last word in history.”

The Vatican’s publication of “The Message of Fatima,” including the photocopies of Sister Lucia’s original description of the “secret” is still available online here.