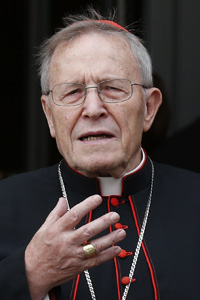 German Cardinal Walter Kasper gestures as he leaves a session of the Synod of Bishops on the family at the Vatican in this Oct. 6, 2015 file photo. (CNS photo/Paul Haring)

VATICAN CITY (CNS) — The ecumenical commemoration of the 500th anniversary of the Protestant Reformation in 2017 can be a time to celebrate the fact that Christians are no longer “on the path of separation, but that of unity,” said Cardinal Walter Kasper, former president of the Pontifical Council for Promoting Christian Unity.

Catholics and Lutherans are finding common ground in what Cardinal Kasper described as “the original, fundamental” emphasis of Martin Luther, “which is the Gospel of grace and mercy and a call to conversion and renewal.”

“The path toward full unity is open, even though it may be long and full of obstacles,” the cardinal wrote in a new book, which is based on talks he gave in Germany in January. The Vatican newspaper, L’Osservatore Romano, published the concluding chapter of the book in its May 19 edition.

In the introduction, the newspaper said, Cardinal Kasper recognizes that “for many years Catholics considered Luther simply to be a heretic,” the person who divided the Western church. But over the past few decades, Catholic historical and theological studies have come to a greater appreciation of Luther’s faith and broader acceptance of some of the main points of his theology, not to mention his hymns, such as “A Mighty Fortress Is Our God.”

“Luther was not an ecumenical man in the modern sense of the term,” the cardinal wrote. But neither was the theologians and church officials he went up against.

“Both were inclined to polemics and controversy,” he said, and the arguments quickly reached the point of schism.

Ecumenical dialogue has taken the opposite path, Cardinal Kasper wrote. “Dialogue does not mean tossing into the sea that which one held as true up to now,” but it does require a willingness to listen to one another and to learn from one another.

Pope Francis is scheduled to travel to Lund, Sweden, in October to join the World Lutheran Federation and other Christian representatives in launching a yearlong program of study and prayer services marking the 500th anniversary of the Reformation.

In 2013, the official Lutheran-Roman Catholic Commission on Unity issued “From Conflict to Communion,” a document suggesting an ecumenical approach to commemorations of the anniversary.

Luther, who was an Augustinian monk, priest and theologian, “had no intention of establishing a new church but was part of a broad and many-faceted desire for reform,” the document said. “In 2017, when Lutheran Christians celebrate the anniversary of the beginning of the Reformation, they are not thereby celebrating the division of the Western church. No one who is theologically responsible can celebrate the division of Christians from one another.”

At the heart of the Reformation, the document said, were different ways of expressing the need for salvation, God’s justification of sinners and the authority of Scripture and tradition.

Cardinal Kasper, echoing remarks made by retired Pope Benedict XVI in an interview published in March, said a renewed focus on God’s mercy is “a sign of the times,” as well as an important area of Martin Luther’s theology and a topic where Catholics and Lutherans can find common ground.

“Only God’s mercy can heal the deep wounds that division has inflicted on the body of Christ, which is the church,” Cardinal Kasper said. God’s mercy “can transform and renew our hearts so that we are open to conversion, to expressing mercy among us, to forgiving each other for the injustices of the past, to reconciliation and to setting off together with patience, step by step, on the path toward unity in a reconciled diversity.”