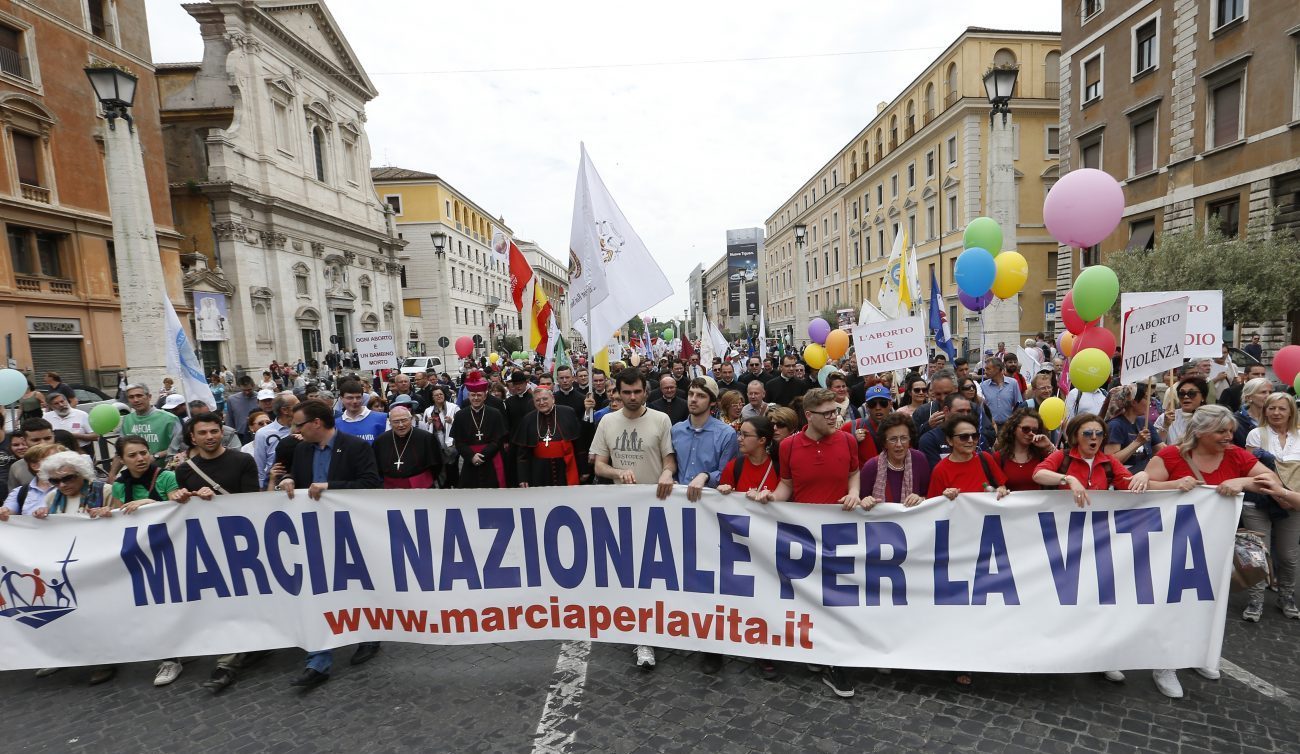 People participate in the 6th annual March for Life in Rome May 8. The march ended outside St. Peter's Square at the Vatican where Pope Francis was leading the Regina Coeli. (CNS photo/Paul Haring)

ROME (CNS) — People from at least two dozen countries joined Italians May 8 for the sixth annual National March for Life in Rome.

Carrying multicolored balloons, crucifixes or children, the estimated 30,000 people walked through the historic center of the city and joined Pope Francis for the midday recitation of the “Regina Coeli” prayer in St. Peter’s Square.

The pope greeted the marchers, who were led by U.S. Cardinal Raymond L. Burke, patron of the Knights and Dames of Malta; Archbishop Luigi Negri of Ferrara-Comacchio, Italy; and Auxiliary Bishop Athanasius Schneider of Astana, Kazakhstan.

Organizers said more than 100 pro-life and pro-family organizations participated, including dozens from 29 countries besides Italy. Although the march is not sponsored by the Catholic Church or a particular Catholic group, hundreds of priests and religious joined the marchers.

The marchers carried signs not only urging an end to legalized abortion, but also urging Italian lawmakers to reject proposed legislation allowing euthanasia and a bill — further along in the legislative process — that would recognize civil unions of unmarried heterosexual and homosexual couples.

Before greeting the group, Pope Francis spoke to them and to thousands of other visitors about the feast of the Ascension, which was celebrated May 5 at the Vatican and May 8 in Italy.

“After having seen their Lord ascend to heaven, the disciples returned to the city (Jerusalem) as witnesses who with joy proclaimed to all the new life” that came with the death and resurrection of Jesus, the pope said.

“This is the witness — made not just with words but also through one’s daily life — the witness that every Sunday should go out from our churches in order to enter each week into homes, offices, schools, places where people gather and have fun, hospitals, prisons, homes for the elderly, places crowded with immigrants and the peripheries of our cities,” the pope said. “This is the witness we must give each week: Christ is with us. Jesus, who ascended to heaven, is with us. Christ is alive!”