Nothing can keep God from seeking those who stray, pope says 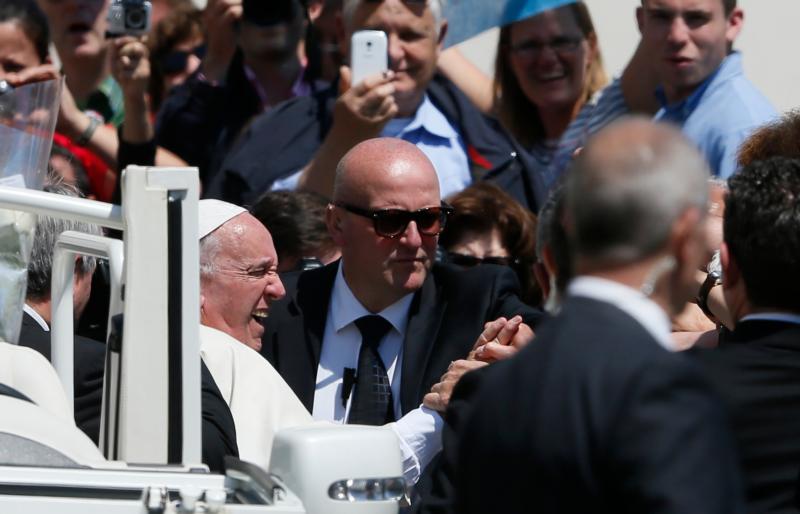 Pope Francis reacts as someone in the crowd pulls his hand as he leaves his general audience in St. Peter's Square at the Vatican May 4. Domenico Giani, center, the pope's lead bodyguard, intervenes. (CNS photo/Paul Haring)

VATICAN CITY (CNS) — There is no such thing as a soul that is lost forever, only people who are waiting to be found, Pope Francis said.

God is not part of humanity’s “throwaway culture” and does not shut out the sinner and those most in need, the pope said May 4 during his weekly general audience.

Because of his immense love for everyone, God takes the illogical step of leaving his faithful flock behind in the harsh desert to seek out the one who has gone missing, he told those gathered in St. Peter’s Square.

The pope reflected on the Gospel parable of the good shepherd, which, he said, reflects Jesus’ concern for sinners and God’s commitment to never give up on anyone.

Jesus uses the parable to explain how “his closeness to sinners must not scandalize, but, on the contrary, encourage everyone to seriously reflect on how we live our faith,” the pope said.

The parable, he said, responds to the doctors of the law and the Pharisees, who “were proud, arrogant, believed themselves just,” and, therefore, became suspicious or shocked seeing Jesus welcome and eat with sinners.

“(The good shepherd) could have reasoned, ‘Well, let’s look at the numbers: I have 99, I lost one, oh well. No. He goes looking for it because everyone is very important to him and that (sheep) is the one most in need, the most abandoned, the most rejected and he goes out to find it.”

The parable according to the Gospel of Luke begins, “What man among you having a hundred sheep and losing one of them would not leave the 99 in the desert and go after the lost one until he finds it?”

The query, the pope said, introduces a paradox that questions how smart this shepherd could be when he abandons his precious flock, not in a safe pen, but in the dangerous desert just for one sheep.

“He could have reasoned, ‘Well, let’s look at the numbers: I have 99, I lost one, oh well,'” the pope said. But, “no. He goes looking for it because everyone is very important to him and that (sheep) is the one most in need, the most abandoned, the most rejected and he goes out to find it.”

The story might make people think that the good shepherd doesn’t care about the ones he leaves behind, the pope said, “But in actuality it’s not like that. The lesson Jesus wants to give us instead is that no sheep can be lost. The Lord cannot resign himself to the fact that even one single person may be lost.”

God’s desire to save all his children is so “unstoppable, not even 99 sheep can hold the shepherd back and keep him locked up in the pen.”

“We are all forewarned — mercy toward sinners is the way God works” and “nothing and no one will be able to take away his will of salvation” for all of humanity, the pope said.

“God doesn’t know our current throwaway culture,” he said. “God throws nobody away. God loves everyone, seeks out everyone, everybody — one by one.”

The parable shows how everything depends on the shepherd and his willingness to look for the lost ones.

But it also tells the faithful flock that they will always be on the move, that they “do not possess the Lord, they cannot fool themselves keeping him imprisoned in our mindset and game plans,” Pope Francis said.

“The shepherd will be found where the lost sheep is,” he said, and it is up to the flock to follow the shepherd’s same journey of mercy so all 100 may be reunited again and rejoice.

The church needs to reflect often on the parable of the lost sheep, he said, because there is always someone who has strayed from the fold.

Sometimes seeing that empty place at the table, the pope said, “is discouraging and makes us believe that the loss is inevitable, an illness without a cure. And then we run the risk of closing ourselves up in the pen where there will be no smell of sheep, but the stink of stale air.”

Christians, he said, must never have the musty smell of confinement, which happens when a parish or community loses its missionary zeal and cuts itself off from others, seeing itself as “we — quote unquote — the righteous.”

Christians must understand that in Jesus’ eyes, no one is ever lost for good; there “are only sheep that must be found.” God waits up until the very end, like he did for the good thief, who repented before he died on the cross next to Jesus, the pope said.

No distance is too far to keep the shepherd away, and “no flock can give up on a brother” because the joy of finding what was lost belongs both to the faithful and the shepherd, he said.

“We are all sheep who have been found again and welcomed by the Lord’s mercy, called to gather the whole flock together with him,” Pope Francis said. 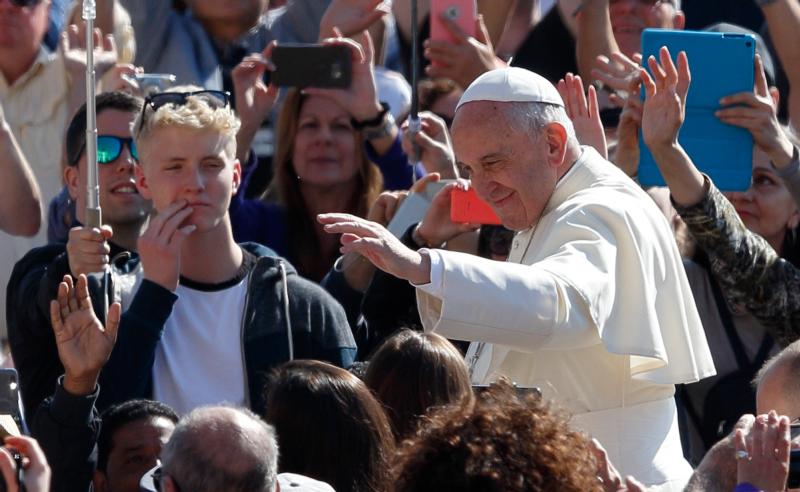 Pope Francis greets the crowd during his general audience in St. Peter’s Square at the Vatican May 4. (CNS photo/Paul Haring)

PREVIOUS: Pope might have to buy a drink for soldiers’ bishop

NEXT: Vatican magazine gives voice to women in the church, official says