Pope tells struggling Europe he has a dream for its future 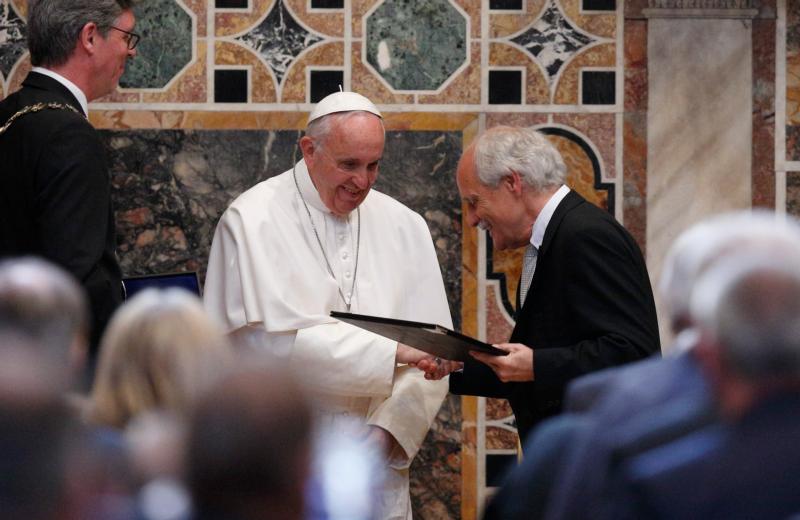 Pope Francis receives the Charlemagne Prize from Jurgen Linden, president of the Society for the Conferral of the Charlemagne Prize, during a ceremony in the Sala Regia at the Vatican May 6. At left is Marcel Philipp, mayor of Aachen, Germany, where the prize is normally presented. (CNS photo/Paul Haring)

VATICAN CITY (CNS) — As Europe faces an unprecedented influx of immigrants and refugees while struggling to counter continued economic woes, Pope Francis urged the continent to step up to its responsibilities with renewed hope, not cower behind walls and treaties.

The pope — a South American son of Italian immigrants — evoked U.S. civil rights leader Martin Luther King Jr., telling European heads-of-state and top-level representatives that he had a dream of a divisive Europe coming together to protect the rights of everyone, especially families and migrants.

The pope’s dream of a rejuvenated and united Europe came as he received the prestigious Charlemagne Prize May 6.

The award is traditionally conferred on the feast of the Ascension in the German city of Aachen. The award is presented every year by the citizens of Aachen to commemorate Charlemagne — the first Holy Roman Emperor — and to honor a public figure for his or her commitment in promoting European unity.

The ceremony to honor Pope Francis, however, was held in a frescoed hall of the Apostolic Palace, drawing distinguished European leaders, including German Chancellor Angela Merkel, Italian Prime Minister Matteo Renzi, King Felipe VI of Spain, Grand Duke Henri of Luxembourg, as well as the heads of the European Parliament, the European Council and the European Commission — three men who were also past laureates of the prize.

The mayor of Aachen, Marcel Phillip, told those assembled that “Pope Francis is a godsend for Europe.”

His perspective as a South American, whose relatives were Italian immigrants, and as leader of the Catholic Church, lets him see “clearly through the veil of affluence just how warped and ensnared in contradictions our continent is,” the mayor said.

Europe has lost its bearings and “the values that we urgently need to rediscover and strengthen are essentially Christian values,” Phillip said.

Pope Francis, who typically eschews titles of honor, said he was offering “this prestigious award for Europe. For ours is not so much a celebration as a moment to express our shared hope for a new and courageous step forward for this beloved continent.”

The pope delivered a 30-minute talk tinged at times with admonishments but filled with heartfelt advice and lofty yet urgent dreams for the future.

“What has happened to you?” he repeated three times. What has happened, he asked, to the glorious Europe of the past: the champion of human rights; the home of artists; the mother of heroes who upheld “and even sacrificed their lives for the dignity of their brothers and sisters?”

He called for the recollection of and courageous return to the bold ideals of the founding fathers of a united Europe — those who were committed to “alternative and innovative paths in a world scarred by war.”

“They dared to change radically the models that had led only to violence and destruction. They dared to seek multilateral solutions to increasingly shared problems,” he said.

The pope said Europe needs to give birth to a “new humanism” built on including and integrating diversity, promoting respect and dialogue, and offering everyone an important role to play in working for the common good.

Attempts to make everything the same leads to “forms of ideological colonization” and the “cruel poverty” of exclusion, which in turn leads to vulgarity, narrowness and meanness, he said.

Today’s communities desperately need to include everyone in a culture of dialogue and consensus, he said.

“Peace will be lasting in the measure that we arm our children with the weapons of dialogue, that we teach them to fight the good fight of encounter and negotiation,” the pope said. “In this way, we will bequeath to them a culture capable of devising strategies of life, not death, and of inclusion, not exclusion.”

Europe needs not just political, economic and military coalitions, he said, but also alliances built on cultural, religious and educational ideals and visions.

Coalitions can reveal how, “behind many conflicts, there is often in play the power of economic groups,” and the coalitions can defend people from being “exploited for improper ends.”

The pope called for: real efforts at helping young people develop their potential; a just distribution of resources and opportunities; and a “more inclusive and equitable” social economy that invests in people.

The Catholic Church, he said, must help in this “rebirth of a Europe weary, yet rich in energies and possibilities.”

The church’s mission is proclaiming the Gospel and binding the wounds of humanity with God’s consolation, mercy and hope, he said. “Only a church rich in witnesses will be able to bring back the pure water of the Gospel to the roots of Europe.”

“Like a son who rediscovers in Mother Europe his roots of life and faith, I dream of a new European humanism,” rooted in memory, courage and “a sound and humane utopian vision,” the pope told his distinguished guests.

In this dream, he said, Europe respects life; cares for the poor, elderly and estranged; fosters honesty, beauty and simplicity; promotes the rights of everyone; and concentrates on “faces rather than numbers, on birthrates more than rates of consumption.”

The pope noted that the desire for a united Europe “seems to be fading” with people “tempted to yield to our own selfish interests and to consider putting up fences here and there.”

His call for unity and solidarity comes as the United Kingdom is set to hold a referendum June 23 to vote whether to leave the 28-nation European Union, and as some member nations tighten their borders and restrict the number of refugees they will accept.

NEXT: Faith does not deaden pain but teaches that it is passing, pope says