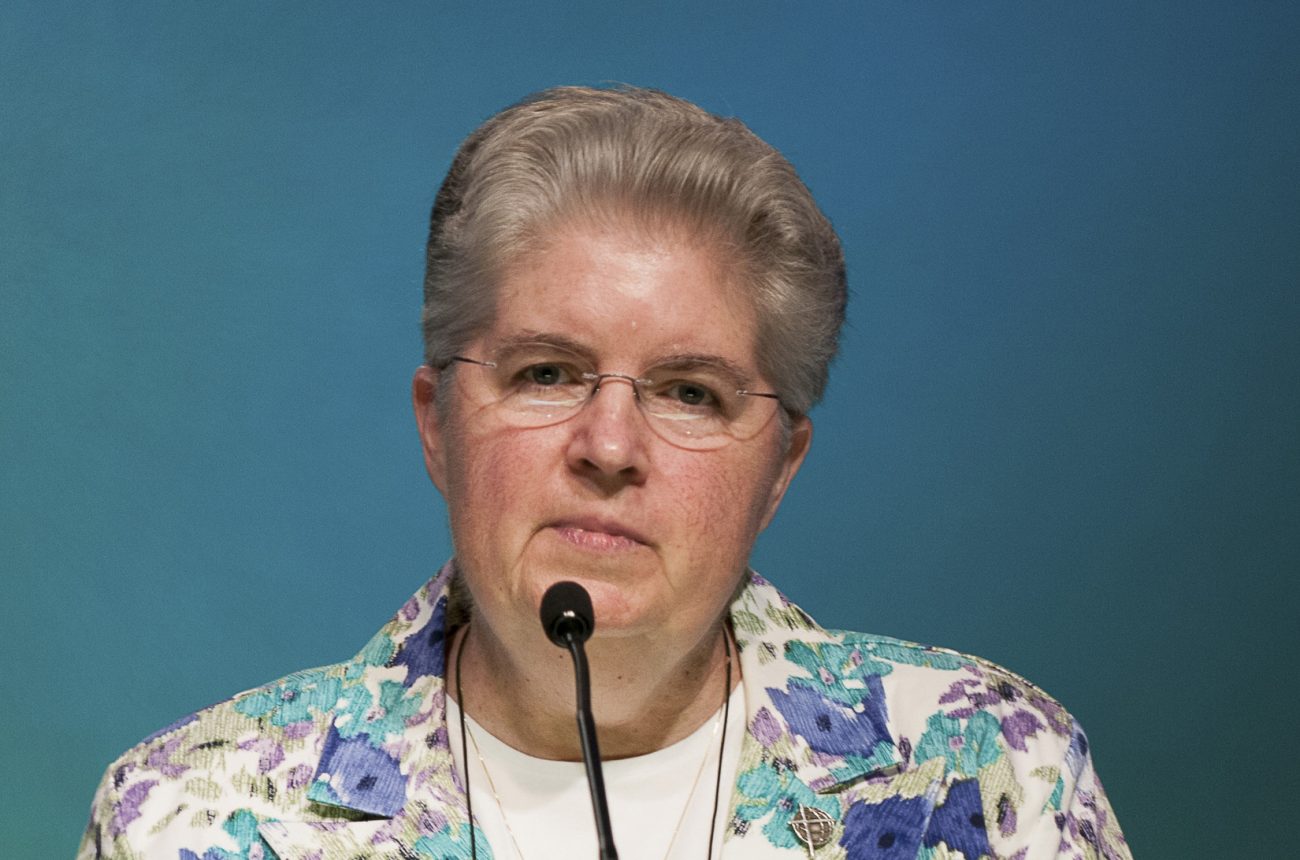 U.S. Sister Carol Zinn, a Sister of St. Joseph from Philadelphia, is pictured in a 2013 photo. (CNS photo/Roberto Gonzalez)

ROME (CNS) — The leaders of the world’s communities of Catholic women religious were warned against accepting an “entitlement creep” that numbs them from confronting poverty and environmental destruction.

At the opening session of a triennial assembly of the International Union of Superiors General in Rome, U.S. Sister Carol Zinn, a member of the Sisters of St. Joseph, told about 900 women religious representing nearly 500,000 sisters globally that religious life has widely been a “first-world lifestyle” marked by opportunities for higher education and job and housing security.

While Sister Zinn said such education is important, she said it also “numbs our minds and blinds our heart.”

The gifts that women religious receive, she said May 9, “can create a numbness of consciences and a blindness of heart through which we can easily see not the pain, but see what we want to see.”

During five days of plenary sessions and meetings, including a scheduled private audience with Pope Francis May 12, the community leaders were to tackle questions of the role of religious life in the world in the light of current global issues, particularly the continuing economic and environmental crises.

Sister Zinn focused much of her remarks on spurring action to fight global climate change and degradation of the environment. She called on the women to undertake a conversion of mindset, heart and will to become “weavers of solidarity for the planet.”

She told the story of a young girl who was late coming home because she stopped to cry with another girl who had broken a favorite toy, adding that the story “captures the core of our vocation.”

“How can we be present enough to the reality of our Earth today so that our hearts are broken?” Sister Zinn asked. “It’s so easy for us to avoid the reality … because the reality oftentimes stands before us, and we do not see it for what it is, and so we are unable to respond to it.”

“The entire world, the entire planet, every species on the planet needs you right now,” said Sister Zinn, who laced her remarks with quotations from Pope Francis’ environmental encyclical, “Laudato Si’, on Care for Our Common Home.”

Maltese Sister Carmen Sammut, president of the International Union of Superiors General and the general superior of the Missionary Sisters of Our Lady of Africa, opened the gathering May 9 by explaining the assembly’s theme was chosen because many are familiar with the “beautiful, complex, patient, creative, skillful work” of weaving.

“The commitment to global solidarity is also a most beautiful and complex enterprise which needs patience, solidarity and skill,” Sister Sammut said. “And like all weaving, it starts with one stitch and goes on.”

She said the meeting would be an opportunity for the leaders to come to know one another and how religious life is lived in their various contexts.

“It is a grace-filled time when the weaving can be advanced so that when we are far from each other, our network can become more efficient,” Sister Sammut said. “Let us weave dreams that awaken what is truest in us.”

One particular initiative mentioned was the creation of a five-member Council of Canon Lawyers. The members, prominent canon lawyers who are women religious from five continents, are now advising the UISG on canonical matters and will also offer advice to women’s congregations around the world.

NEXT: Religious life is about prophecy, not preservation, speakers say