Yunni Perez holds plastic bottles used to carry water while she poses for a photo April 3 inside her home in a slum area of Caracas, Venezuela. (CNS photo/Carlos Garcia Rawlins, EPA)

BARQUISIMETO, Venezuela (CNS) — Under other circumstances, Jonny Lopez might have been happy that he was losing weight.

“I’ve been running around the city so much, looking for food, that I’ve lost 20 pounds,” said the father of two.

Standing in line has become a routine as he tries to buy food for his family and to supply a fast-food stand that he runs on a street corner in their neighborhood.

“The longest line was 11 hours once, to buy a package of corn meal, a little milk, rice and meat,” he said, adding that the money he and his wife earn does not cover necessities. “The money we used to spend on a week’s groceries now buys just a small bag of things.”

“The Venezuelan people are dying of hunger,” Lopez said.

In December, Venezuela’s minimum wage covered only half of a family’s basic food needs, according to sociologist Luis Pedro Espana.

The downturn in international oil prices in 2015 sent Venezuela’s oil-dependent economy into freefall, immersing the country in an unprecedented crisis marked by shortages of food and medicine and social unrest.

Embattled President Nicolas Maduro has blocked opposition efforts to force a recall election and has called out the military to help maintain control.

The city where Lopez and his wife, Aura Gallardo, live with their two daughters, Aurimar, 13, and Marijose, 3, is the fourth-largest in Venezuela. Lopez and his wife grew up in the youth movement in their parish, Jesus of Nazareth, and now participate in the Marriage Encounter movement.

In their parish and within their own families, they feel the sharp polarization between “chavistas” — Maduro supporters who take their name from former President Hugo Chavez — and opponents of the government. 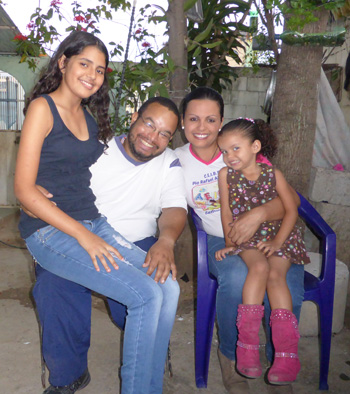 Jonny Lopez and his wife, Aura Gallardo, pose April 7 with their children Aurimar, 13, and Marijose, 3, in Barquisimeto, Venezuela. Standing in line has become a routine as Lopez tries to buy food for his family and to supply a fast-food stand that he runs on a street corner in their neighborhood. (CNS photo/Hildegard Willer)

“We never talk about politics in the parish, because there are people on both sides, and I have seen families destroyed by the conflict,” said Gallardo. She and Lopez said they are disillusioned with the government, but have little enthusiasm for the political opposition, which claims to have collected more than 1 million signatures to recall Maduro.

“I don’t like the fact that voting in the referendum won’t be secret,” Gallardo said.

The government has asked that everyone who signed recall petitions should verify their signatures and has threatened that government workers who sign could lose their jobs. Gallardo, a teacher, is afraid of losing hers.

And that’s not the only fear. Besides hunger, violence has increased throughout the country, especially in her family’s neighborhood.

“In the past month alone, 16 young people were murdered in this neighborhood,” said Medical Mission Sister Maigualida Riera, who coordinates the parish’s youth ministry.

She and the pastor, Jesuit Father Jorge Ulloa, are trying to help people survive. They have offered workshops on preparing healthy means with leftovers, collected excess medicines, encouraged a music program for children and youth and asked for donations of food for distribution in the parish.

“But people no longer have food to donate,” Sister Maigualida said.

That is true throughout the country, said Yaneth Marquez, coordinator of Caritas Venezuela.

“In the Venezuelan Caritas offices, we survive on what the faithful and some companies donate, but we’re receiving almost nothing now,” she said. “We’ve had to cut our nutrition and health care programs in half.”

She said she hopes the government will grant the Venezuelan bishops’ request to allow the church to bring donations of food and medicine into the country. So far, however, there has been no response.

Not only is the price of food skyrocketing with runaway inflation, but food and other necessities are also scarce. The government sets the exchange rate of the national currency, the bolivar, giving rise to a flourishing black market.

“Something that costs you 60 bolivars in the regulated market may cost you 1,200 in the free market,” Lopez said.

Venezuelans must wait in long lines to buy the few staples available, which are distributed by the government at prices set by the government. If they cannot purchase what they need, they go hungry or buy from “bachaqueros,” people who resell food at black-market prices.

Throughout Venezuela, businesses are empty and many stores in shopping centers have closed. Besides a food shortage, there is a lack of health-care supplies, even in hospitals, and an energy crisis is causing rolling blackouts.

Pharmacies sell soft drinks and snacks instead of medicines, and in cities in the interior of the country, electricity is cut off for four hours a day. To save energy, public employees work only two days a week, and students attend classes only four days a week.

There is talk that the Vatican could mediate between the government and the opposition. In early May, Pope Francis publicly expressed his concern about the situation in Venezuela and sent a personal letter to Maduro.

When a top Vatican official was scheduled to visit Venezuela for the ordination of a priest set to become the Vatican nuncio to Congo, rumors grew that the Vatican was taking on the role of mediator, even though the Vatican denied it. In the end, though, the scheduled trip of Archbishop Paul Gallagher, Vatican secretary for relations with states, was canceled “for reasons not depending on the Holy See.”

Meanwhile, as Lopez scrounges for food for his family and his corner stand, he fears the worst.

“For the past 15 years,” he said, “I’ve been afraid that we would face armed social upheaval.”

NEXT: Pope Francis, or his successor, to visit Ireland for meeting of families