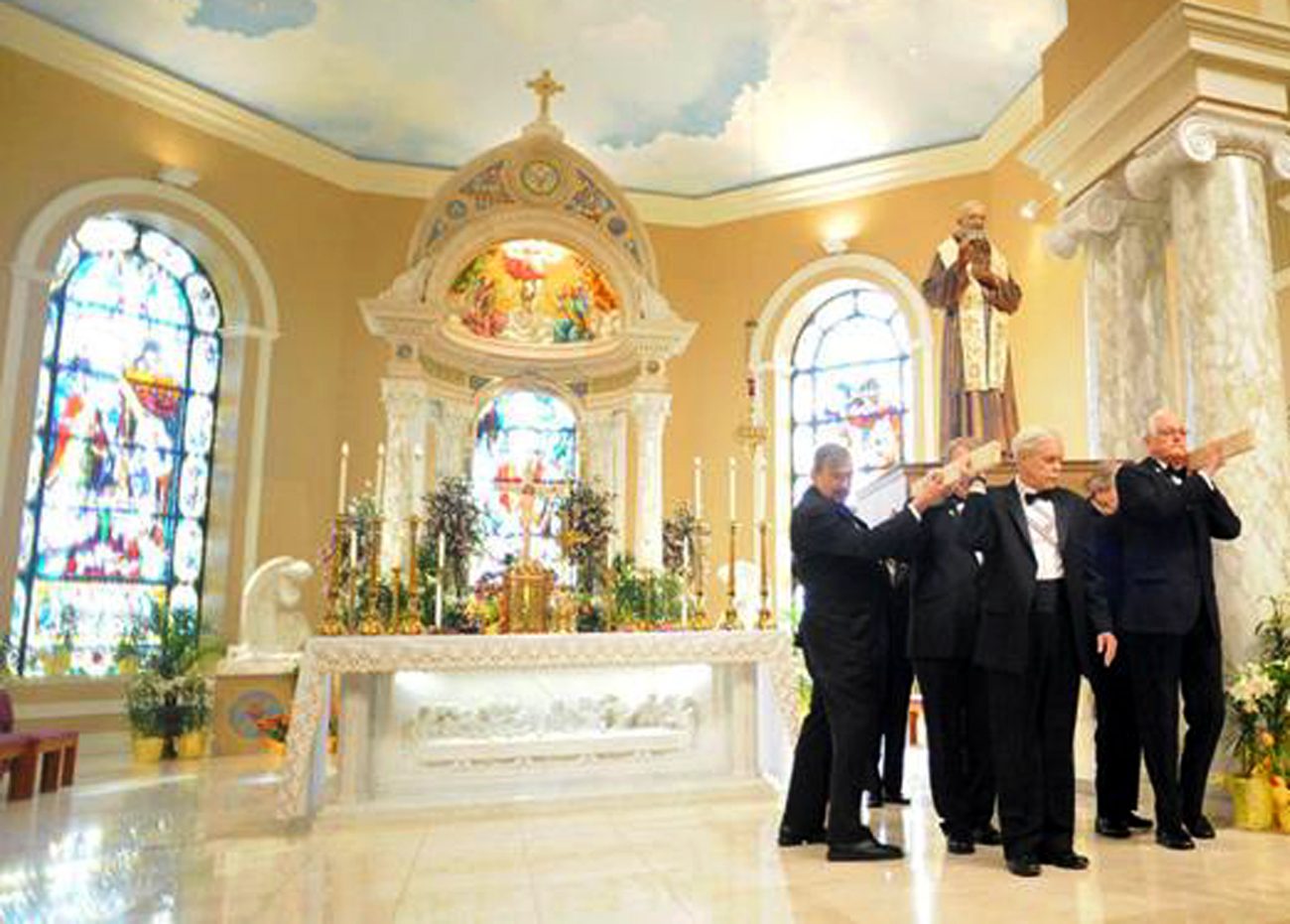 Men of St. Bede Parish, Holland, carry a statue of St. Pio of Pietrelcina in the church.

St. Bede Parish in Holland will celebrate its first annual Padre Pio Festival Saturday and Sunday, June 25-26, and is starting off in a big way. 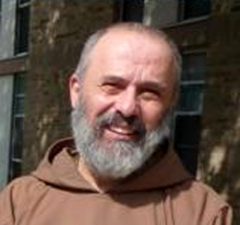 The 12:30 p.m. Mass on the 26th will have as celebrant and homilist Father Pio Francesco Mandato, a member of the Franciscan Missionary Hermits of St. Joseph. His family knew St. Pio well, and Father Mandato received his first holy Communion from the future saint’s hands in 1964.

As to why the parish is celebrating a festival in honor of St. Pio (1887-1968), it stems from Pope Francis’ declaration of the Year of Mercy, explained Msgr. John Marine, St. Bede’s pastor.

“We thought of Padre Pio as a saintly example of how God’s love comes to us,” he said, adding “as part of our pastoral plan we wanted to increase the devotional life of our parishioners and Padre Pio is someone we could start with.

“I was amazed how many people are devoted to Padre Pio and the examples of his intercession in their life and the inspiration he has given to their life.”

Msgr. Marine first became aware of Padre Pio as a child in Holy Saviour Parish, Norristown, where the sisters in the school talked about him and there was also talk about a possible miracle in the parish through his intercession.

In his priesthood this early encounter with Padre Pio was reinforced through the many stories he heard from parishioners about miraculous interventions they experienced through the intercession of Padre Pio.

“I have shared a lot of people’s stories of his miraculous intervention,” Msgr. Marine said. “I think his story is a story for our times. When people are troubled they are looking for signs of God’s intervention.”

Padre Pio was born Francesco Forgione to a devout peasant family in Pietrelcina in Southwest Italy. When he entered the Capuchin Franciscans in 1903 he took Pio as his name in religion, the Italian form of Pius, in honor of Pope St. Pius I. In 1916 he was sent to the monastery at San Giovanni Rotondo in Foggia, where he would remain until his death more than a half-century later.

From early years he developed a reputation for holiness and mysticism and was much sought after as a confessor and powerful intercessor to heaven through prayer. He also evidenced on his hands the stigmata, reminiscent of the wounds of the crucified Christ. He was canonized as St. Pio of Pietrelcina in 2002.

Father Pio Mandato was born in Pietrelcina, and his parents and grandparents knew Padre Pio well and would often travel to San Giovanni Rotondo to seek his advice, to confess their sins and receive his blessing.

They experienced first-hand little miracles through his powerful intercession. When Father Mandato’s mother, Graziella, told Padre Pio she was pregnant with her first child, it was he who asked the child should be named Pio Francesco. It was shortly after his first Communion that Father Mandato’s family came to the United States, settling in New Jersey.

After the decision was made by Msgr. Marine and his counselors to celebrate a festival in honor of Padre Pio, he contacted Father Mandato, who preaches widely on his family’s friend who is now a saint. Father Mandato was more than happy to come to St. Bede’s for the observance.

While the religious celebration with Masses, a healing service, confessions and veneration of Padre Pio relics is paramount, the festival also includes a street procession with the Verdi Band, singers, ethnic foods, craft vendors and a children’s program including entertainment.

All of this requires a great deal of planning and volunteerism. For this Msgr. Marine turned to St. Bede the Venerable Council 15478, Knights of Columbus, to sponsor the event.

The council itself is only a couple of years old, but already it is a force in the parish.

“We have a great group of guys that are brothers in the Knights,” said Brian Stedman, chancellor for the council and chairman for the festival. “We only started a couple of years ago and have over a hundred members. Monsignor Marine is a great inspiration to us.”

At this time the national leadership of the Knights is encouraging councils to become more parish focused and St. Bede Council is doing that. It has already participated in several parish events but this festival is its biggest undertaking yet, and will be a continued focus in upcoming years, according to Stedman.

“There are a lot of great parishioners at St. Bede’s,” he said. “Personally I came to devotion to Padre Pio through my wife. She was always talking about him, and I’ve learned a lot about him.”

For more on the Padre Pio Festival at St. Bede’s Holland visit the website PadrePioFestivalHollandPa.com. 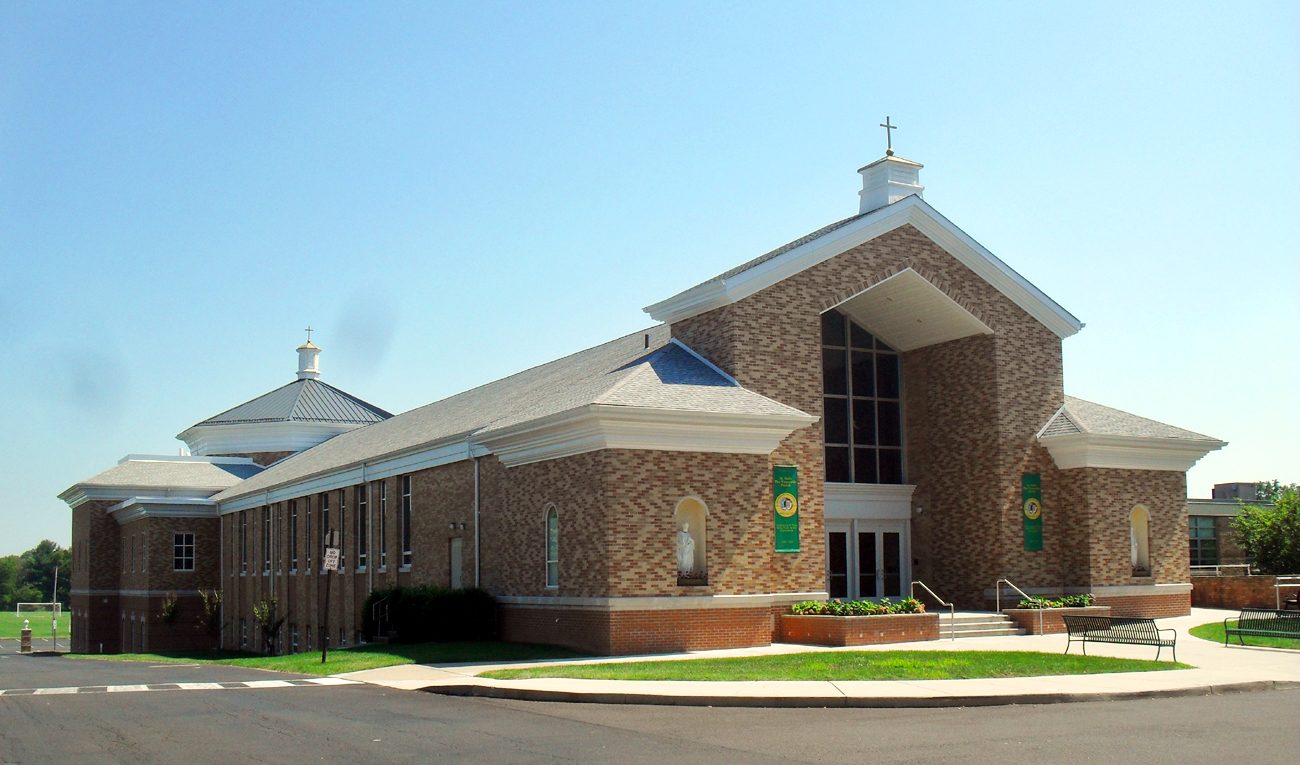 St. Bede Church, located at 1071 Holland Road in Holland, Bucks County, will host the Padre Pio Festival June 25-26. It will feature Mass and other liturgies plus a family celebration with food, music and entertainment.