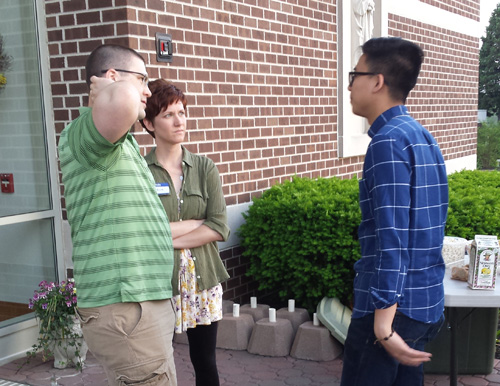 It is not easy being a young adult these days. For most it entails learning how to support oneself, be a spouse, and become a parent. Or it can entail a whole new way of life, whether it be military service or religious profession.

As many young adults have lost the mooring that religion can provide, the first steps into adulthood today can be even more difficult than in the past.

Perhaps this explains the relative proliferation of Catholic young adult groups over the last generation. The archdiocese has 18 such active groups.

They are needed, according to archdiocesan official Elizabeth Riordan, because they give 18- to 35-year-olds a place to “experience the church as community” and provide the support of faith in a secular world, she said.

One reason these groups are doing reasonably well is that most young people haven’t rejected their Catholicity as such. Rather they feel connected to their religion in the same way as, say, secular Jews. But they do want more than just that cultural attachment.

Thus many young Catholics — whether they are in the “emerging” demographic (18-23) or older — will join a local young adult group.

That explains the appeal of Catholic Young Adults of Chester County (CYACC, which members call “kayak”), a group that meets Wednesdays at SS. Peter and Paul Church in West Chester.

On a recent Wednesday night, 20-plus people showed up for the group’s regular meeting. The event started at 7:30 p.m. with a half-hour social mixer. While the women tended to speak with the women and the men with the men, there were otherwise no evident cliques. 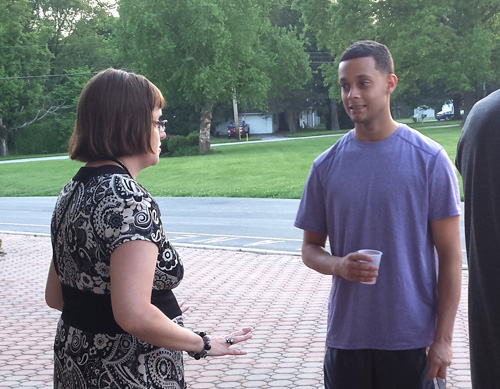 Indeed several attendees said one thing they love about the group is its very friendly, welcoming and open atmosphere.

At 8 p.m. the group moved into the church basement, where they listened to a speaker discuss the saint-making process and how the saints show each of us how to be saints.

This regular aspect of the meetings has both a catechetical and evangelical purpose, said CYACC director Christina Quinn, 32, a local research scientist.

The reason for this is a recognition that in the period after the Second Vatican Council, the bottom fell out of traditional catechetical practice, according to the authors of the book, “Young Catholic America” (Oxford Press, 2014).

Understanding that most of its members are not well-formed in the Catholic faith, the group has brought in a range of speakers so they can learn together about it, including such topics as the Mass, Marian devotions, Theology of the Body, discerning one’s vocation, and belief in Christ’s real presence in the Eucharist.

Besides meeting her fiancé Yassir, Maureen Friedrich, 27, of Berwyn, said the ongoing catechesis is one of the best parts about CYACC.

“I went to Catholic school kindergarten through 12th grade,” she said, “but then I never really investigated or tried to go deeper into the faith until I joined this young adult (group) and learning about why we believe what we believe at a higher, adult level.”

Quinn, the leader of the group, said the teaching component of meetings helped attendees “sort out parts of their faith they just couldn’t get a hold on.”

Groups such as CYACC help to bolster the knowledge members already have and backfill what they don’t. This makes the group perfect for them.

While some appreciate the faith formation groups such as CYACC provide, others are seeking a social outlet. Young adult groups provide a place where members can meet people their own age who roughly share their values and beliefs. 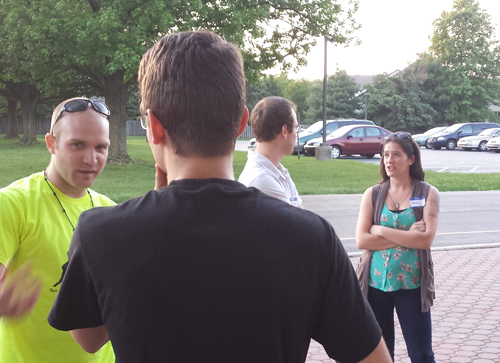 What attracted Theresa Bayer, 20, an eye technician from West Chester, was that CYACC “wasn’t just for people who are at college … but for people with some life experience who I could relate to. I was looking for friends who I could connect with and who shared my faith.”

She has seen members model Christ to a remarkable degree, which she said helped her to be a better woman, a view shared by other men and women members.

“I’ve heard on more than one occasion,” she said, “individuals say that they were in a bad place in their life and, for whatever reason, decided to check out CYACC, and the experience just put them in a better place.

“Being part of a Catholic young adult group gives you a place to talk about your faith and people to support you,” she said. “The different activities CYACC plans — holy hours and prayer, social events and learning through our speaker nights — creates a nice balance. It also allows people to find a setting they feel most comfortable in when they are first checking out the group.”