‘A sword has pierced heart’ of city, says Orlando bishop about shooting 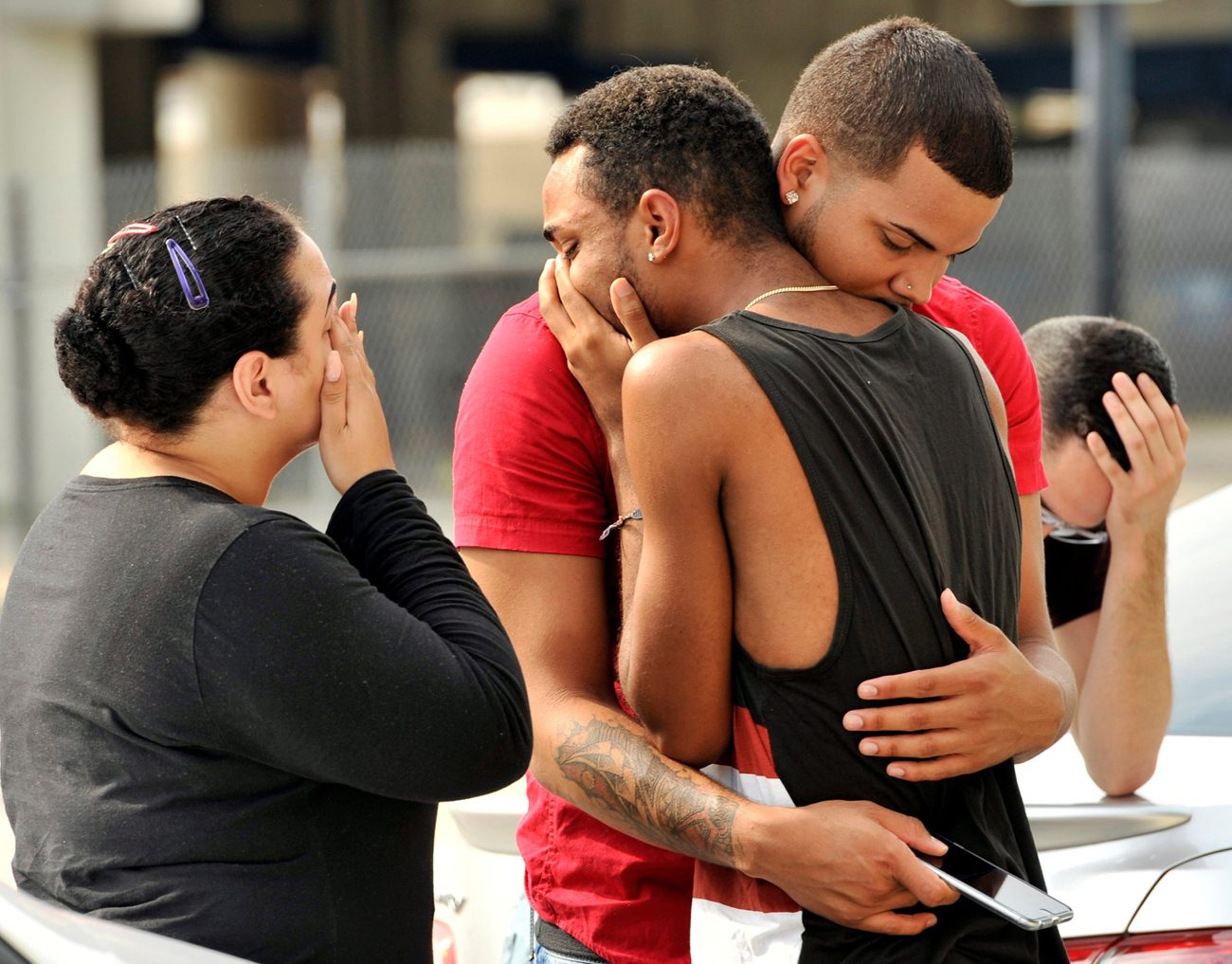 People embrace outside the headquarters of the Orlando, Fla., Police Department June 12 during the investigation of a mass shooting at a gay nightclub in Orlando. (CNS photo/Steve Nesius, Reuters)

ORLANDO, Fla. (CNS) — Orlando Bishop John G. Noonan urged people of faith “to turn their hearts and souls” to God and pray for the victims, the families and first responders following the worst mass shooting in U.S. history June 12.

“A sword has pierced the heart of our city,” he said in a statement.

“The healing power of Jesus goes beyond our physical wounds but touches every level of our humanity: physical, emotional, social, spiritual,” he said. “Jesus calls us to remain fervent in our protection of life and human dignity and to pray unceasingly for peace in our world.”

The shooting rampage at a crowded nightclub in Orlando left 50 people dead, including the gunman, and 53 wounded.

Across the nation, reaction from church and community leaders was swift, and in cities large and small, people organized candlelit vigils for the victims and their families the night of the shooting.

“Waking up to the unspeakable violence in Orlando reminds us of how precious human life is,” said Archbishop Joseph E. Kurtz of Louisville, Kentucky, who is president of the U.S. Conference of Catholic Bishops.

“Our prayers are with the victims, their families and all those affected by this terrible act,” he said in a statement June 12. “The merciful love of Christ calls us to solidarity with the suffering and to ever greater resolve in protecting the life and dignity of every person.”

Chicago Archbishop Blase J. Cupich said, “Our prayers and hearts are with the victims of the mass shooting in Orlando, their families and our gay and lesbian brothers and sisters.”

In Orlando, priests, deacons and counselors from the Diocese of Orlando and Catholic Charities of Central Florida were serving at an aid center established by city officials.

Throughout the day June 12, church personnel were helping victims and families “on the front lines of this tragedy,” Bishop Noonan said. “They are offering God’s love and mercy to those who are facing unimaginable sorrow. They will remain vigilant and responsive to the needs of our hurting brothers and sisters.”

The bishop also asked all parishes in the nine-county diocese in central Florida to include prayer intentions during Sunday Masses.

“Today’s prayers have been offered for victims of violence and acts of terror … for their families and friends … and all those affected by such acts against God’s love,” Bishop Noonan said. “We pray for the people of the city of Orlando that God’s mercy and love will be upon us as we seek healing and consolation.”

Bishop Noonan planned to lead an evening prayer vigil for the community — called a “Vigil to Dry Tears” — at St. James Cathedral in Orlando June 13.

He said the Catholic Church “recognizes the affliction brought to our city, our families and our friends” by “this massive assault on the dignity of human life. … I hope this opportunity to join each other in prayer will bring about an outpouring of the mercy of God within the heart of our community.”

In his statement, Archbishop Cupich expressed gratitude to the first responders and civilians at the scene of the shooting. They “heroically put themselves in harm’s way, providing an enduring reminder of what compassion and bravery look like — even in the face of such horror and danger,” he said.

In a letter to the Chicago archdiocesan Gay and Lesbian Outreach, Archbishop Cupich said: “For you here today and throughout the whole lesbian and gay community, who are particularly touched by the heinous crimes committed in Orlando, motivated by hate, driven perhaps by mental instability and certainly empowered by a culture of violence, know this: The Archdiocese of Chicago stands with you. I stand with you.”

He also urged Americans to “find the courage to face forthrightly the falsehood that weapons of combat belong anywhere in the civilian population.”

In Washington, Cardinal Donald W. Wuerl said in a post on his blog said that “the love of Jesus Christ will prevail,” and while all too often “it appears it that our civilization is walking through the valley of the shadow of death, we will fear no evil.”

He said all people of good will must stand together “in making another impassioned appeal for peace and security in our communities and throughout the world.”

Bishop Jaime Soto of Sacramento, California, said that “the ugly horror of hate” in Orlando “casts a chilling shadow from coast to coast.”

“The sweetness of the Sabbath was saddened by the loss of life and the bitter taste of fear. Still, the command to keep holy that day can soothe and save us as we now wrestle with the worries and the wounds left in the wake of such brutality,” he said.

“Hatred blinded the conscience of the perpetrator of these horrible acts, acts no one must be allowed to excuse or justify,” Miami Archbishop Thomas G. Wenski said. “The survival of civilization demands zero tolerance towards such acts of barbarism. Hate-inspired terrorism is still a clear and present danger in our world.”

Another Florida prelate, Bishop Robert N. Lynch of St. Petersburg, expressed his sorrow over the tragedy and also addressed the gun rights issue.

“Our founding parents had no knowledge of assault rifles which are intended to be weapons of mass destruction. … It is long past time to ban the sale of all assault weapons. … If one is truly pro-life, then embrace this issue also and work for the elimination of sales to those who would turn them on innocents.”

Bishop Lynch also said that “sadly, it is religion, including our own, which targets, mostly verbally, and also often breeds contempt for gays, lesbians and transgender people.”

Bishop R. Walker Nickless of Sioux City, Iowa, urged Catholics in that diocese to keep the Orlando community in their prayers. “In desperate times, we ask the Blessed Virgin Mary to bring solace to suffering. May she help those in need, give strength to those who have lost heart and comfort the sorrowful as they mourn this horrific act of senselessness.”

“Every human life is sacred,” said Pittsburgh Bishop David A. Zubik. “The tragic death of each of these individuals is a loss to us all. … Our Muslim neighbors are grieving over this tragedy as much as our gay and lesbian neighbors. We are all God’s children. May we love, honor and respect one another as such.”

Courage International, a Catholic organization that provides support for people who experience same-sex attraction, condemned “the atrocious violence” at the gay night club, adding that “in the face of such outrageous violence and loss of life, human words and explanations fall short.”

“So people of faith look to the everlasting mercy and compassion of almighty God, who ‘is near to the broken-hearted, and saves the crushed in spirit,'” the group said, quoting Psalm 34.

The Courage statement also reminded people of what the Vatican Congregation for the Doctrine of the Faith said 30 years ago about violence toward gay people: “It is deplorable that homosexual persons have been and are the object of violent malice in speech or in action. Such treatment deserves condemnation from the church’s pastors wherever it occurs. It reveals a kind of disregard for others which endangers the most fundamental principles of a healthy society. The intrinsic dignity of each person must always be respected in word, in action and in law.”

PREVIOUS: Alvare says gender equality is ‘not to be grasped’ but asserted

NEXT: Conference encourages young women to be leaders, share gifts with church