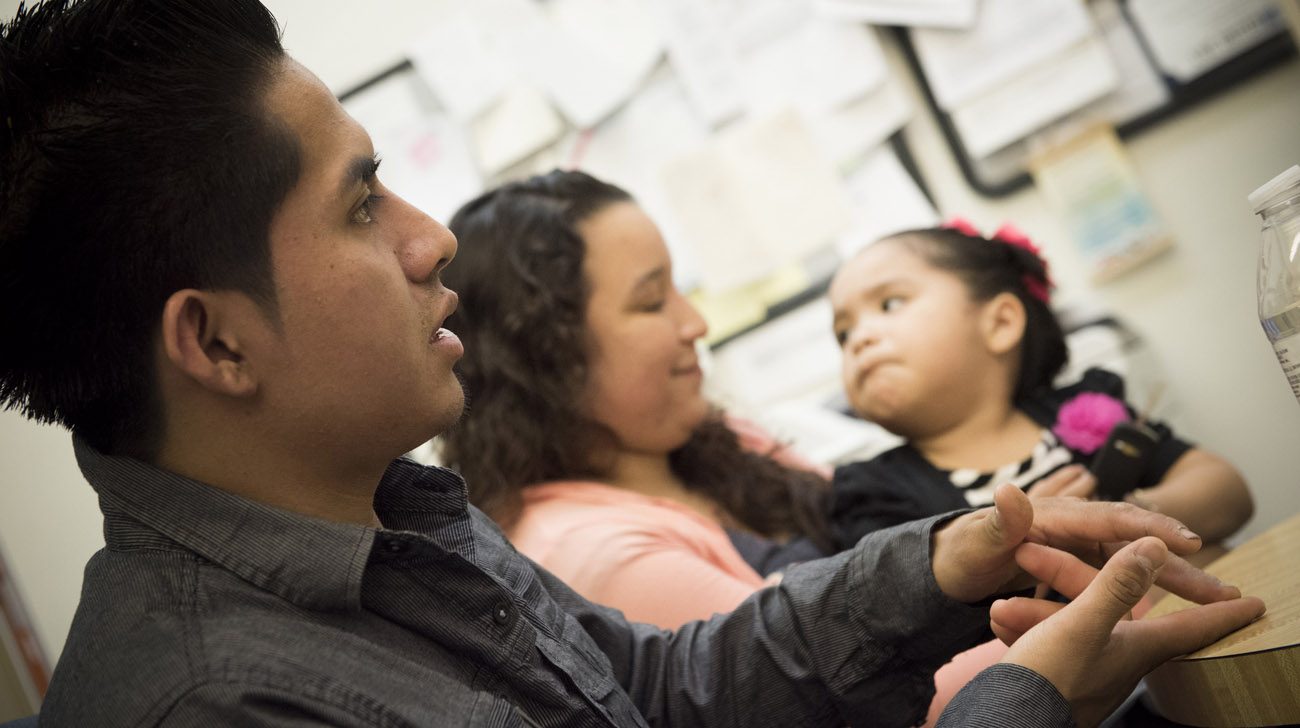 Jose Aguilar, seen with his wife and daughter, sits for an interview. He was a child when he and his family entered the United States without legal permission. A Catholic Charities program in Trenton, N.J., helped him attain legal status through the Deferred Action for Childhood Arrivals program. (CNS photo/Jeff Bruno, The Monitor)

TRENTON, N.J. (CNS) — “What’s the point of working so hard in school if you’re going to end up cutting grass?”

Those words stick with Jose Aguilar two decades later. He was sitting in a New Jersey classroom, a teenager in the country without legal documents, and took his ex-Marine teacher’s hard-nosed advice as license to, as he puts it, “give up.”

Aguilar remembers his teacher calling him an “excellent student,” but saying, “I see a lot of kids just like you who end up working as a landscaper. If I was you, I’d just quit school, and find something you’re good at.”

When he was young, Jose had been brought across the U.S.-Mexico border without documentation as his family pursued economic stability and a brighter future. His choices led him to instability and a brush with death.

But his journey didn’t end there. A conversion experience, becoming a father and making a trip to a Catholic Charities immigration office helped him regain the promise his family sought when crossing the border decades ago.

In many ways, Jose’s story exemplifies the challenges and opportunities facing the roughly 700,000 young people brought to this country without legal permission who have found permanent legal status in the U.S. through the Deferred Action for Childhood Arrivals program, or DACA.

Many immigrants and immigrant advocates were hopeful the U.S. Supreme Court would uphold President Barack Obama’s executive actions expanding the DACA program and creating a new program, the Deferred Action for Parents of Americans and Lawful Permanent Residents, or DAPA.

Obama’s policies were aimed at temporarily protecting more than 4 million unauthorized immigrants from deportation and allowing them to have temporary work permits, but 26 states challenged the president’s policies and they were put on hold last November by a Texas-based federal judge. His injunction was upheld by the 5th U.S. Circuit Court of Appeals in New Orleans.

On June 23, in United States v. Texas, the high court in a 4-4 decision upheld the circuit court’s ruling.

The ruling could have a far-ranging impact on families struggling to stay together and gain a foothold from which to build a more stable future.

Families not unlike Jose and Marina Aguilar.

Jose was 7 when his family succeeded on their fourth attempt to cross the border.

“The guy that was supposed to bring us, he abandoned us in the desert, he left us there,” Jose recalled in an interview with The Monitor, newspaper of the Diocese of Trenton. Another “coyotaje” — a smugglers who help migrants cross the border without authorization — came across them and helped them finish the journey.

“When I was in Mexico, they all told me the U.S. was beautiful, that I would have everything I never had over there, and at first it was like, ‘That was a lie,'” Jose said. “It was horrible at first, crying, missing Mexico, but you just get used to it.”

He learned English, “good enough that my friends thought I was born here,” and worked hard in the classroom. Then came his conversation with his teacher, and the spiral downwards commenced.

He joined a gang, parties were frequent, drugs became a part of life — then more than just a part. An accidental overdose left Jose in the hospital, at death’s door. He started seeing deceased family members. Feeling his time was up, he started to pray.

He recovered, started attending church again, and swore off drugs. He found the stability his mother wanted for him in leaving Mexico, and a large part of that change occurred upon meeting his now-wife, Marina, and the birth of their daughter, Helen.

“Once she was born, we were like, ‘We have to do something about changing her life,’ because it’s not just about our life anymore, everything is about her now,” Marina said. “We want her to have both of her parents, always, and that’s it. It’s just the best thing that happened to us. She’s our sunshine.”

Jose and Marina, who belong to St. Anthony Claret Parish in Lakewood, New Jersey, began to look into programs that would help Marina become a permanent U.S. citizen. A friend encouraged them to attend an outreach presentation organized by Catholic Charities Community Services.

Marina’s green card meant she could apply for lawful citizenship. For over two months, she stressed over studying for the citizenship exam, finding time during breaks at work or before going to sleep.

As the date of her test approached, her car was stolen. Inside was the green card proving her legal residence.

Catholic Charities helped Marina navigate the bureaucracy and continue her journey toward becoming a naturalized U.S. citizen. Even after she passed the citizenship test, the U.S. Citizenship and Immigration Services still made her wait two months before the naturalization ceremony to investigate the lost green card.

When the day finally came for Marina to be sworn in as a U.S. citizen, she said, “I just couldn’t stop crying.

“It really means a lot to me — I met Jose here, my daughter was born here, this is now my country. I really worked hard for it, and it’s my country now.”

Regardless of the court’s June 23 ruling, having the stability of legal status in the U.S. has made the Aguilars’ lives less stressful in innumerable ways.

“I used to be scared before, of him (Jose) going out (for the day) and not coming back,” Marina told The Monitor. “I used to always make sure I went with him, so in case anything happened, I knew he’d be OK. … We don’t need to be scared anymore.”

Marina hopes Helen will grow up learning to dream big but added that “nobody will give you anything for free. … You have to work hard for it.”

After obtaining his GED and receiving legal status through DACA, Jose already has a new goal: to be sponsored into U.S. citizenship by Marina and become a licensed contractor.

“It’s not that I’m not happy with what I have,” Jose said, “but I want my daughter to have a better future.”

Brown is outgoing editor of The Monitor, newspaper of the Diocese of Trenton.