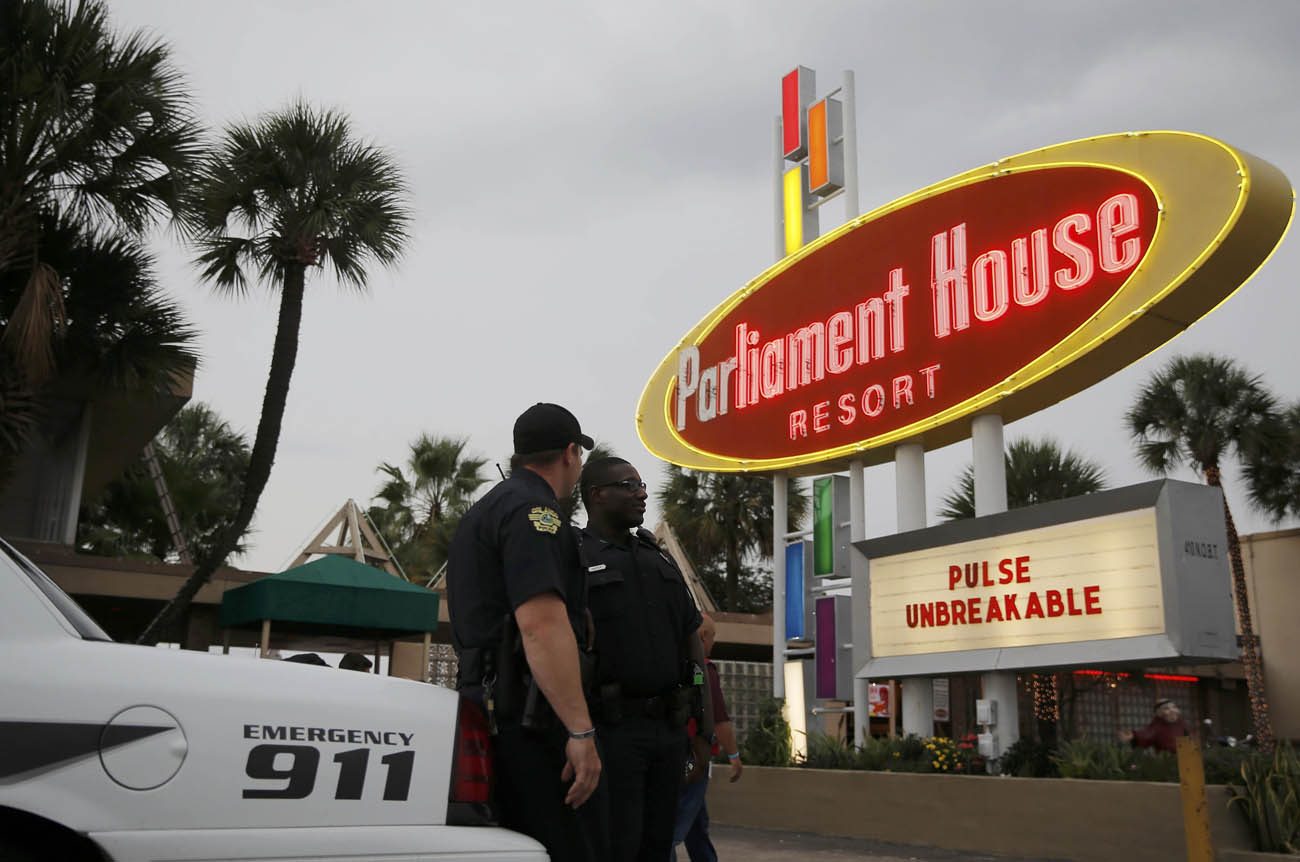 Police provide security during a June 12 candlelight vigil at the Parliament House Resort in Orlando, Fla. As grief and shock turn to worry following the worst mass shooting in modern U.S. history, security and policing experts are looking for long-term lessons from the June 12 tragedy in Orlando. (CNS photo/Jim Young, Reuters)

WEST PALM BEACH, Fla. (CNS) — As grief and shock turns to worry following the worst mass shooting in modern U.S. history, security and policing experts are looking for long-term lessons from the June 12 tragedy in Orlando.

The shooting by Florida resident Omar Mir Seddique Mateen at the Pulse gay nightclub left 49 patrons dead and another 53 injured. Most of the victims were Latino and there for a dance party. Mateen died in a gun battle with SWAT team members.

The lone gunman’s motivations may never be fully known, but the FBI June 20 released partial transcripts of a 911 call Mateen made during his rampage in which he pledged allegiance to the Islamic State and mentioned the Boston Marathon bombers. Details were still emerging about any ties he may have had to the terrorist group.

As in the aftermath of the 9/11 terror attacks, the shooting presents a potential minefield of conflicting impulses and responses related to immigration policy, interreligious relations, gun ownership and what constitutes hate crimes or if that term accurately applies in this situation.

“We are in a difficult place in the history of our country because terrorism is not going away anytime soon for three reasons: It’s cheap, it is easy and it is extremely effective,” said Joseph Augustyn, who was a deputy associate director of Central Intelligence for Homeland Security following 9/11.

Now working in the private sector following a 28-year tenure at the CIA working in counterterrorism and intelligence, Augustyn told Catholic News Service in a telephone interview that Islamic State, or ISIS, is a considerably more well-funded and dangerous force compared to al-Qaida, which was tied almost solely to the personal wealth and leadership of Osama bin Laden.

“ISIL is on a mission to create a caliphate, its methods are more brutal, more visual and their modus operandi much less understood than was al-Qaida,” said Augustyn. “Al-Qaida was more predictable. We used to think al-Qaida was a hard target to get your arms around and disrupt. CIA considers ISIS even harder.”

A member of St. Mary of Sorrows Parish in Fairfax, Virginia, who has given national security talks at Ave Maria University in Naples, Florida, and at Marymount University in Arlington, Virginia, Augustyn said he personally appreciates the breadth of Catholic social teaching and a long tradition of welcoming the stranger.

But he cautioned that even CIA chief John Brennan recently reiterated that Islamic State is moving and working among immigrant communities, including among refugees on the move globally.

On June 17, the FBI reportedly spoke to members of the Islamic Center of Fort Pierce, south of Orlando — the same mosque attended by Mateen and by an extremist believed to be the first American suicide bomber in Syria.

Mateen was an American citizen born to an Afghan family now living in the town of Port St. Lucie not far from the Islamic Center. Mateen worked as a security guard. He had a son with his second wife, Noor Zahi Salman.

In his visit to Orlando following the shooting, President Barack Obama characterized Mateen as well as the San Bernardino, California, shooters as homegrown terrorists.

Obama said the shootings were carried out “not by external plotters, not by vast networks, or sophisticated cells, but by deranged individuals warped by the hateful propaganda that they had seen over the internet, then we’re going to have to do more to prevent these kinds of events from occurring.”

Augustyn said whether Mateen is ultimately defined as a genuine Islamic State operative doesn’t change the need to understand that Islamic State does operate in a decentralized way and is often adept at using social media and delighting in disrupting Western society. He added the militants aim to terrorize in less grandiose but more attainable ways than al-Qaida and the 9/11 attacks.

“There is no question that jihadists and radical Islam is out to destroy the Western lifestyle and Christianity writ large,” Augustyn said, adding that he supports greater citizen vigilance for suspicious situations, restrictions on assault rifle sales like the one used by the Orlando shooter and for tougher measures to screen refugees to the extent that is even possible.

“It is a precarious balance between being a compassionate Catholic, (an) attitude that we are taught since grammar school. But there is a security element that makes you look at this in a slightly different way,” Augustyn added.

At Marymount University in Arlington, social and criminal justice professor Michael Bolton, a former member of the Arlington police force, who has experience in hostage and active-shooter situations, cautioned against possible overreactions following June 12.

Bolton told CNS that he is concerned that law enforcement in Orlando has possibly come under unfair criticism for the pace of their response the night of the shooting, and he is concerned that undue racial or ethnic tensions could be harmful to innocent Americans if racial profiling goes unchecked.

“It is a tough call; we have to exercise some judgment not over-dramatize or overreact to these situations,” Bolton said. “We will never be so vigilant that we can always prevent these things, and the FBI are overwhelmed with intelligence.”

Questions remain as to whether the Orlando gunman had a bomb or accomplices given the gunman’s boasts the night of the massacre. Mateen reportedly claimed to have an explosive vest, and he also may have claimed to have a female accomplice with a bomb and other snipers positioned nearby.

Negotiation and SWAT team leaders, he added, are processing disparate pieces of information from multiple sources in very short time frames to end standoffs without further harm. The Orlando nightclub situation comes as close to a perfect storm for generating endless nightmares any police commander accustomed to handling these situations could conjure, according to Bolton.

“The bottom line here we shouldn’t lose sight of, whether radical Islam or homophobia, he is a murderer, and I have no problem with him simply being viewed like that,” Bolton said. “From a criminal justice perspective, all those factors will be evaluated over and over, but the man was a murderer.”