Marianist Brother Gary Marcinowski, a professor of sculpture at the University of Dayton, adds detail to an icon he created during a weeklong workshop on the ancient art form at the Shrine of St. Anthony in Ellicott City, Md., April 25. (CNS photo/Kevin J. Parks, Catholic Review)

Whether the artist is a newbie or experienced doesn’t matter. Each creates an icon, a religious painting filled with symbolism and the artist’s own prayer and reflection.

Some 20 iconographers attended a workshop this spring led by internationally known icon masters at the Shrine of St. Anthony, a repurposed Franciscan monastery in Howard County.

“It’s a wonderful, spiritual practice,” said Laura Clerici, a retired diplomat who created her first icon in Moscow in 2000. “You’re doing something but you’re meditating at the same time. You’re connecting to the Holy Spirit. Once you figure that out you can’t stop.”

Students came from Ellicott City and Cecil and Montgomery counties, but also from as far as London and Los Angeles to study with Vladislav Andrejev, the upstate New York-based founder of the Prosopon School of Iconography, and his son, Dmitri Andrejev, who lives in Vermont.

Iconography, an ancient art form with roots in Greece and Russia, is more than drawings of God and the saints. Every part of the icon, from paint colors to the gold leaf, to the board on which it is created, has special symbolism. 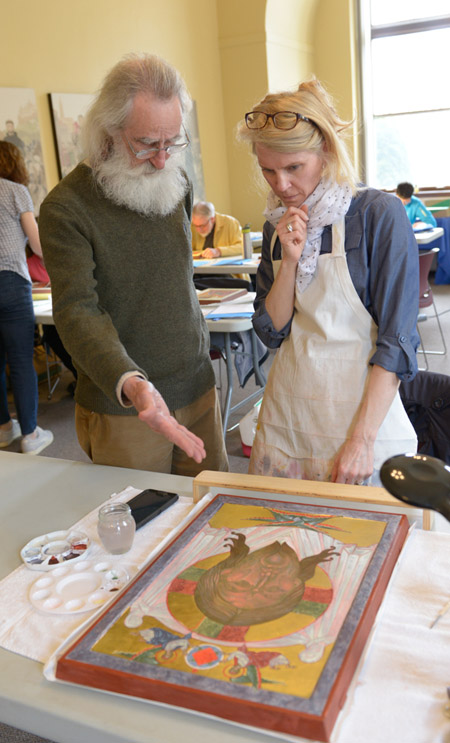 Among the most familiar icons in the Catholic tradition are Our Lady of Perpetual Help and the Black Madonna of Czestochowa.

Each day of the workshop began with chanted prayer for the day’s work. Vladislav Andrejev then spoke, delving into various aspects of this religious art form, followed with demonstrations on technique throughout the day.

His talk considered God’s presence in both light and dark.

Most understand the concept of light as a metaphor for God, according to Andrejev. “It is important to portray the light of God. It’s invisible. It’s transcendent,” he said, but there is a divine darkness, “the mystery of God.”

The creation of an icon takes 22 steps, from the blank wooden board to each layer of paint, clay and gold leaf, to the oil that seals the finished icon.

Each painter, too, is on a journey, one of transformation, according to Andrejev, who said, “We have to expect certain change. The symbolism of each stage is very important.”

“The true icon,” he added during the lunch break, “is within our souls.”

“Every medium you use, every color you use, everything has a symbol of spirit and life,” said Judy Kersse, a parishioner of Our Lady of Perpetual Help in Ellicott City. “It really is a spiritual journey. You’re writing an icon on your heart.”

Each painter applies layers of egg tempera, a traditional mixture of egg yolk, wine and colored powders, with delicate brushes. Some also employ tablets and smartphones to enlarge portions of the images they are working on.

Beginners painted the Archangel Michael. Those with a little experience worked on an image of Gabriel and the most experienced recreated an ancient icon of Jesus’ face on a veil known as a Mandylion.

To the uninitiated eye, it looked as if each artist was merely copying an old icon, but Lynette Hull, of Princeton, New Jersey, an experienced iconographer, likened the experience to a musician interpreting a score.

“We each bring our own personalities, our strengths and weaknesses to the icon,” she told the Catholic Review, the online publication and monthly magazine of the Archdiocese of Baltimore.

“There are quite striking differences even though it’s the same icon,” she said. “I think that’s a beautiful reflection of each individual.”

Marianist Brother Gary Marcinowski, a professor of sculpture at the University of Dayton, Ohio, designed the altar, presider’s chair, ambo and tabernacle at St. Joseph’s Church in Sykesville in 1998. While well versed in other forms of liturgical art, this was his first iconography workshop.

“They are transitions, windows into spirituality,” he said.

“You’re writing a prayer,” said Mick Michieli-Beasley, a member of St. Lawrence Parish in Jessup and the Archangel Michael Icon Guild. “All those beautiful prayers go up and God hears them.”

In its simplest form, “the practice of iconography is showing the Gospel in light and color coupled with prayer,” he added.

Ray Bullock, a parishioner of St. Joseph-on-Carrollton Manor in Buckeystown, kept his first icon of Jesus’ face simple, focusing especially on the eyes and the mouth.

“Everything,” he said, “happens there.”

Icons he painted 10 years ago sustained him after his first wife’s death.

“When I lost my wife, I was in front of the icons every day and they helped me,” he said.

Debbie Baronas, another Our Lady of Perpetual Help parishioner, was touched by the symbolism of each step. The golden halo around her image of the angel Gabriel was created by covering the surface with clay and layering on 24-karat gold.

“You had to breathe on it,” she said, noting the symbolism of the clay of creation, the gold of God and the breath of life.

“You’re making a prayer to the Holy Spirit to work through you,” said Josephine Richards of Carlisle, Pennsylvania. “It’s praying in color.”

Tilghman writes for the Catholic Review, the online publication and monthly magazine of the Archdiocese of Baltimore.

NEXT: Abbey’s books a form of evangelization; tomes reveal a legacy of faith