Survey finds growing interest among Catholics in reading the Bible 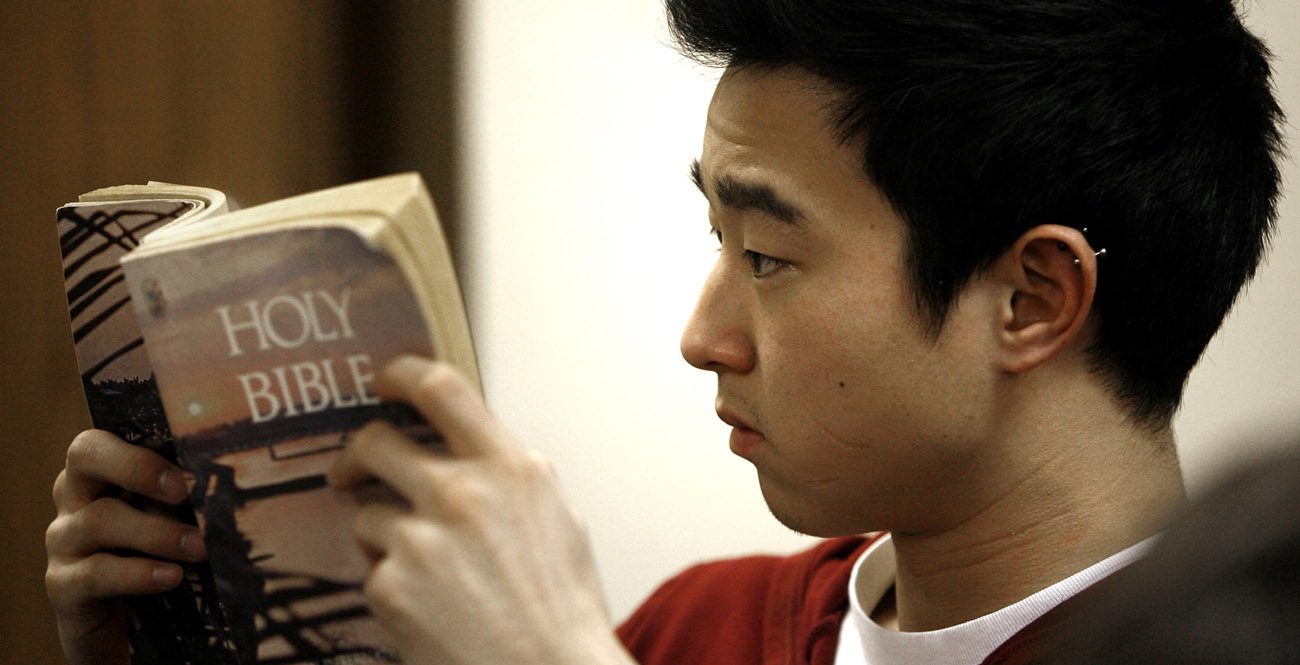 A young man is seen reading a Bible in 2010. A new State of the Bible Survey by the American Bible Society found that 77 percent of Catholics want to read the Bible more often. (CNS photo/Karen Callaway, Catholic New World)

WASHINGTON (CNS) — When Deacon Joseph Jensen entered Our Lady of Good Counsel Passionist Seminary in Warrenton, Missouri, in the late 1950s, he realized he was the only student in his class who had read the Bible.

Deacon Jensen, now a lecturer in biblical studies at Georgetown University in Washington, credited his Seventh-day Adventist grandfather with exposing him to Scripture. Largely though, he said, “I grew up with the idea that Catholics didn’t read the Bible.”

Such a common misconception could be changing.

A new State of the Bible Survey by the American Bible Society found that 77 percent of Catholics want to read the Bible more often. Although the percentage has fluctuated in recent years, it reflects an 8 percentage point increase since January 2013, just before Pope Francis’ election.

The American Bible Society has responded to Catholics’ growing interest in Scripture with new resources such as digital “lectio divina,” an online version of the traditional Catholic method of praying with Scripture. The society uses the survey results to develop techniques to increase engagement with the Bible.

The society’s staffers also developed the Build Your Bible trivia app and a second app so that Catholics can follow along with World Youth Day, set for July 26-31 in Krakow, Poland.

“I think it’s both looking forward and reaching back into the past to find new ways and rediscover ancient ways of engaging with the Scripture for an emerging generation,” Malec said.

Cackie Upchurch, director of Little Rock Scripture Study in Arkansas, the largest provider of Catholic Bible study materials in the U.S., said that modern technology provides a “smorgasbord” of opportunities for Catholics to engage with Scripture.

Even if Catholics do not join a Bible study group, she said, they can find the daily Mass readings on the U.S. Conference of Catholic Bishops’ website at www.usccb.org, have them sent directly by email from the USCCB or find daily reflections across the internet, including Creighton University’s Online Ministries’ website at onlineministries.creighton.edu/CollaborativeMinistry/daily.html.

She said that there are many options for Catholic Bible studies. Some individuals and groups adopt an academic approach while others use “popular scholarship,” a blend of critical study and prayer. The prayer-focused “lectio divina” style of study also is widely used, she added.

Upchurch pointed out that biblical studies are for learning Scripture, so Catholics should not be embarrassed to join a study group because they feel they know little about the Bible.

Deacon Jensen said that whether Catholics study in groups or individually, “the guided reading of the Bible is essential.”

“The Bible is an anthology of the literature of an ancient people that reflects their faith and their time and their culture and their environment, so trying to read it as a modern work without understanding the cultural and historical background easily allows for misinterpretation and confusion,” he said.

No matter how Catholics engage with Scripture, though, Deacon Jensen said he is excited about the growing passion for the Bible he sees in the church, especially in the Bible study group at the Shrine of the Most Blessed Sacrament in Chevy Chase, Maryland, at which he occasionally speaks, the weekly Bible study he leads at the Carmelite monastery in Towson, Maryland, and in the courses he teaches at Georgetown.

He described how students often begin his classes simply wanting to satisfy their religion credit requirement but end up “getting wrapped up in how cool this is.”

“There is a real hunger for the word of God that I just really relish and enjoy,” Deacon Jensen told CNS.

The American Bible Society has worked for more than 200 years to engage people with the best-selling book of all time. Several notable U.S. historical figures, including John Jay and Francis Scott Key, founded the society in 1816. The Philadelphia-based society produced the first Braille Bible, developed the Good News Bible translation in contemporary English and launched the Digital Bible Library to house various digital translations.

NEXT: Sisters who also are mothers bring new perspectives to religious life