‘The Greatest’ got his start working at a Louisville Catholic college

A red bike hangs above the entrance of the former Columbia Auditorium where the young Muhammad Ali used to train. Ali reported the bike stolen to a police officer who ran a boxing club in the building's basement. (CNS photo/Jessica Able, The Record)

LOUISVILLE, Ky. (CNS) — It may seem improbable that the late boxing legend Muhammad Ali, a devout Muslim, would be closely connected with a Catholic religious order.

As a young teen, Ali, then known as Cassius Clay, worked at the library of Nazareth College, now-Spalding University. He cleaned and tended the front desk while the Sisters of Charity of Nazareth, founders of the school, had dinner.

“He would leave Central High School at 2 p.m. and work in the library until about 6 p.m. Then, he would go to the Columbia Gym and work out,” said Tori Murden McClure, Spalding’s president and an athlete who worked with Ali in years past.

Ali, who was raised in a Christian household, learned to box at the Columbia Gym, located in the basement of Columbia Auditorium, which is now the Spalding University Center. He was invited by Joe Martin, a police officer who also worked as a boxing coach. Ali met Martin when the young teen reported his red bike stolen. He never recovered the bike, but his fate was sealed with that encounter. The gym, where Ali first practiced his cutting jabs and fast footwork, is still used by Spalding athletes today.

McClure worked closely with Ali as the first development director of the Muhammad Ali Center. And she spoke of her relationship with the world-renowned sports figure at Spalding’s graduation June 4.

To begin the commencement, McClure read a piece of poetry from the “Louisville Lip.”

“Stay in college, get the knowledge, stay there until you’re through,” she read. “If they can make penicillin out of moldy bread, they can sure make something out of you.” 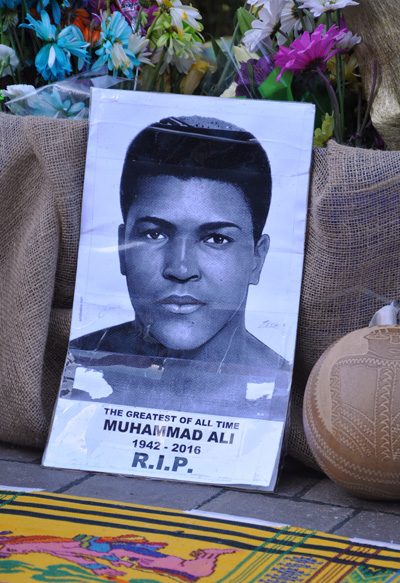 A photograph of Muhammad Ali is seen at a makeshift memorial outside the Muhammad Ali Center in Louisville, Ky., June 7. (CNS photo/Jessica Able, The Record)

“I had just failed on a worldwide stage. Muhammad Ali was one of the few people who understood what I felt like,” she told The Record, newspaper of the Archdiocese of Louisville.

Over a period of a few months, McClure said, Ali gently prodded her, saying, “It’s time to get up now.”

“I said to the students (who graduated) on Saturday, that the time between the two rows was the darkest period in my life. Muhammad Ali reached out to me and picked me up.

McClure noted that the Columbia Gym was integrated, a rarity in the 1950s.

“The South Broadway neighborhood and Nazareth were integrated as well. That didn’t exist in many parts of Louisville,” McClure said.

The self-proclaimed greatest boxer of all time died June 3 in a Scottsdale, Arizona, hospital. He was 74.

He was known the world over as a three-time heavyweight champion and for his unabashed boasting.

Outside the ring, he was a champion of a different sort. His philanthropic, humanitarian and charitable efforts were a visible and important part of his life. Also important was his Muslim faith and his desire for interfaith dialogue and inclusiveness.

In his early 20s, he had joined the Nation of Islam and taken the name Muhammad Ali.

In an interview at the Ali Center June 7, Louisville Metro Mayor Greg Fischer praised Ali as an “interfaith leader before people knew what interfaith was.”

Fischer said despite the sadness of Ali’s passing, he finds beauty in the “human values that bind us together,” especially Ali’s six core principles — confidence, conviction, dedication, giving, respect and spirituality.

“That’s what we should be talking about, not about building walls and hatred,” he said.

In Ali’s final years, Fischer said, his life was not about the titles but about making the world a better place.

“Imagine if every athlete or person of fame just focused on the values he shared (when he said), ‘Service to others is the rent you pay for your room here on earth.’

“Imagine if that was the dialogue. It’s within our grasp,” Fischer added.

Stories about chance meetings with the champ and his impromptu magic shows that have circulated around Louisville and across the world these last six days sketch a portrait of a man who loved people — of every stripe and of every faith. These stories depict a man who loved to delight children and adults alike — offering tricks and sometimes a faux jab or two at a star-struck jaw.

He maintained a decades-long correspondence with members of the Sisters of Charity of Nazareth, including Sister James Ellen Huff, whom he honored with a bouquet of roses at her funeral in 2001.

Able is staff writer for The Record, newspaper of the Archdiocese of Louisville.