By caring for foster child, Phila. couple is making the world a better place 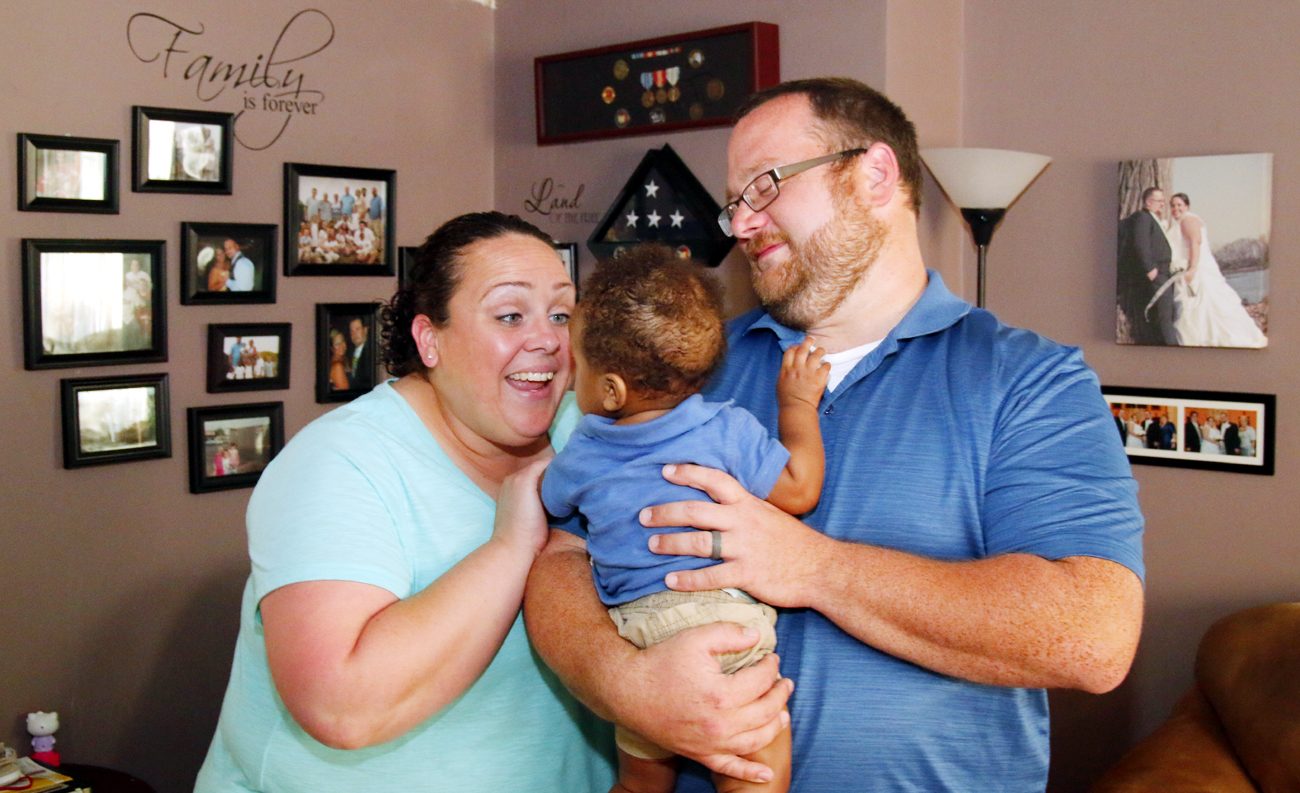 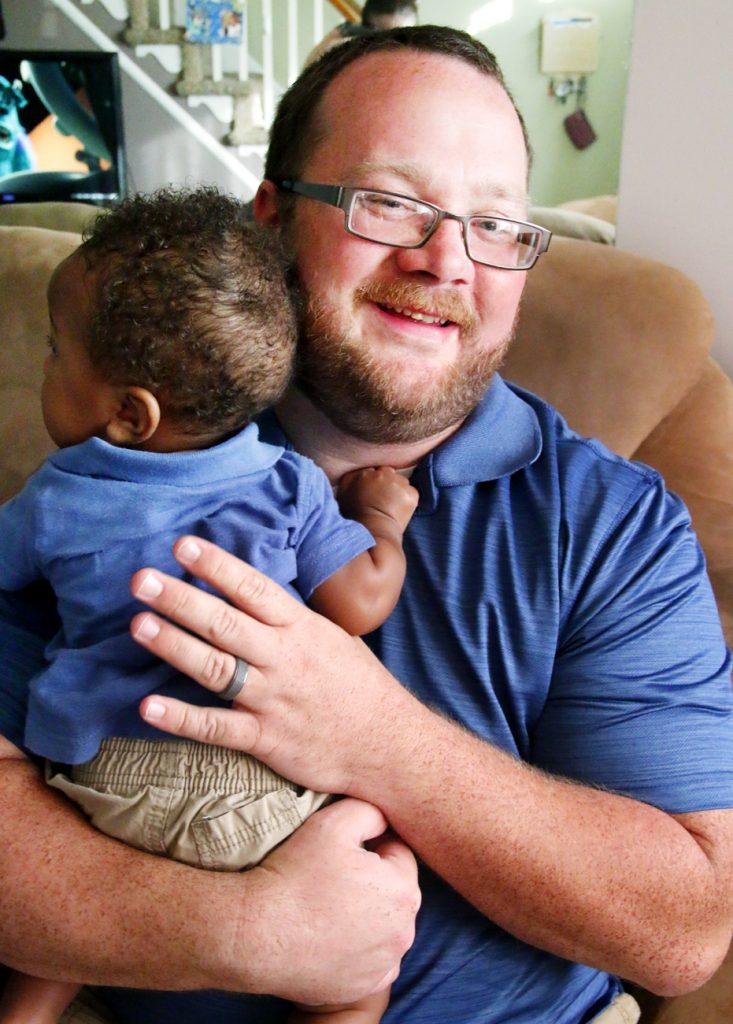 The very first thing Nicole Darrah does on awakening in the morning is go to the next room to check the baby. If little “Jay” smiles up at her that makes her whole day. Really, her husband Mike feels the same way.

If Jay doesn’t especially look like Mike or Nicole, that’s not surprising. He is a foster baby who came to them through archdiocesan Catholic Social Services as a tiny infant in February and immediately became part of the family, which also includes Bella, Buddy and Keely, their three dogs (all rescue animals of course).

Mike and Nicole live in a typical Northeast Philadelphia row house on the southern edge of Our Lady of Consolation Parish. Mike works as a paramedic with a private ambulance service, a skill that grew out of his military service. His prior schooling was at St. Bartholomew, Christ the King and Swenson Skill Center.

They were married on St. Patrick’s Day in 2012. Although they have not had children of their own they are certainly open to it. Becoming foster parents was something they discussed even before marriage.

“Having a family was important to us,” Nicole said. “We would still do it if we had children ourselves.”

This sensitivity to the needs of others resonates thorough the family. 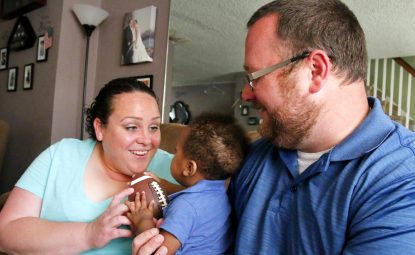 This can all be traced to the tremendous example given to them by Nicole’s sister and brother-in-law, Lou Ann and Matt Feuerstein. Starting in late 2011, they have first taken in three little children as foster children and ultimately adopted them. All three children have the same birth mother.

“My youngest sister is going into her senior year at Holy Family University studying to be a social worker,” Nicole said. “Her motivation was our opening our homes to foster care.”

Mike and Nicole volunteered to take this baby if he or she was going into foster care, and ultimately adopt if possible. This would keep all four children more or less together.

To do this they had to go through investigation and training through Catholic Social Services with lessons at Casa Del Carmen in North Philadelphia and at the Archdiocesan Pastoral Center in Center City.

After Jay arrived, “I was surprised how quickly I fell in love with him,” Mike said. “We always wanted to be pre-adoptive, but we would not have a problem with simply helping children segue back to their birth family.

“For me, going in, there was a tendency to guard my heart, knowing he could be taken away, but I fell in love with him and the fear doesn’t matter.”

In most ways they are no different than other young families today. Because most of Mike’s work is in the evening, he can take care of the baby during the day. On the days he can’t, Nicole takes Jay with her and puts him in a day care facility near her work.

“I was surprised how quickly he trusted us,” she said. She believes the adjustment for Jay was easier than it was for his siblings who were 2 or 3 years old and remembered their birth family when they were placed in care. Consequently it was initially more difficult for Nicole’s sister.

She also remembers her first few nights just as any new parent, constantly checking the crib to be sure Jay was OK. Fortunately, he does snore a bit and that picks up on the baby monitor. “He does keep us busy and on our toes all the time, and that was an adjustment,” Nicole said.

Because the families are close, her sister’s children do get to visit Jay, although it has not yet been explained to them that he is really their brother, and at their age it is too complicated for them to understand at this point.

“We’ve talked about it, and when the time is right we will tell them,” Nicole said.

Meanwhile, Jay’s greatest danger is being spoiled by love if there is such a thing, with even the dogs welcoming him as a member of the family.

“If we put him on the floor one will come over and stand beside him guarding him,” Nicole said.

While Jay is their foster child, Nicole and Mike do receive a stipend for his care. If he is adopted by them, that will cease. But for them it is absolutely not about the money, and both agree anyone who is doing it just for the money should not be foster parents.

There are many people out there who need help, Nicole observed. “If more people would offer a helping hand, the world would be a better place,” she said.

From her perspective it isn’t just waiting for heaven for their reward.

“As a married couple with no children of our own, this gives us a different kind of love we didn’t know existed,” she said. “They don’t know why they are with you. They don’t understand the world yet. All they know is you are taking care of them and that puts a smile on their face.”

For more information on foster care or adoption through the Archdiocese of Philadelphia’s Catholic Social Services call 267-331-2502. 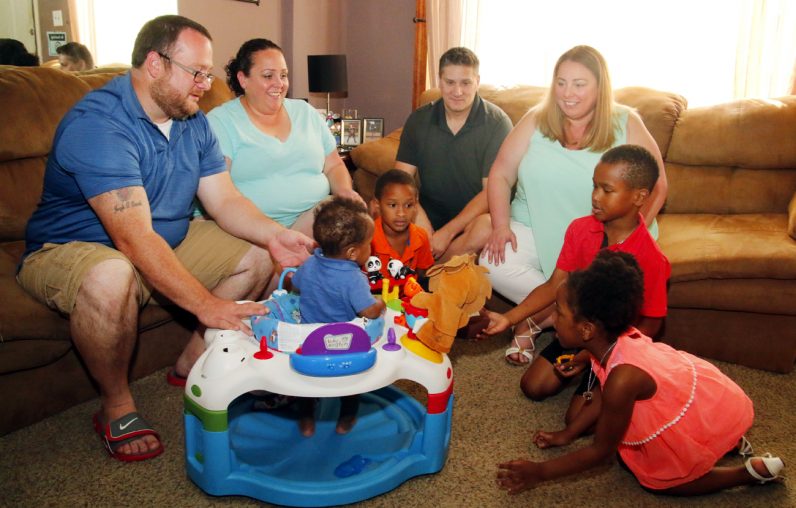 Enjoying some time together at the Darrah home are (seated, from left) Michael and Nicole Darrah, Matthew and Lou Ann Feuerstein and their children playing on the floor, in red, Jude 5, James 6, and Zoe 5, along with baby “Jay” in his jumper. (Sarah Webb)

PREVIOUS: After 25 years, pastor loves parish ministry — and it shows

NEXT: Archdiocese’s new youth ministry leaders are Franciscan U grads