Be known for your love, pope tells people of Armenia 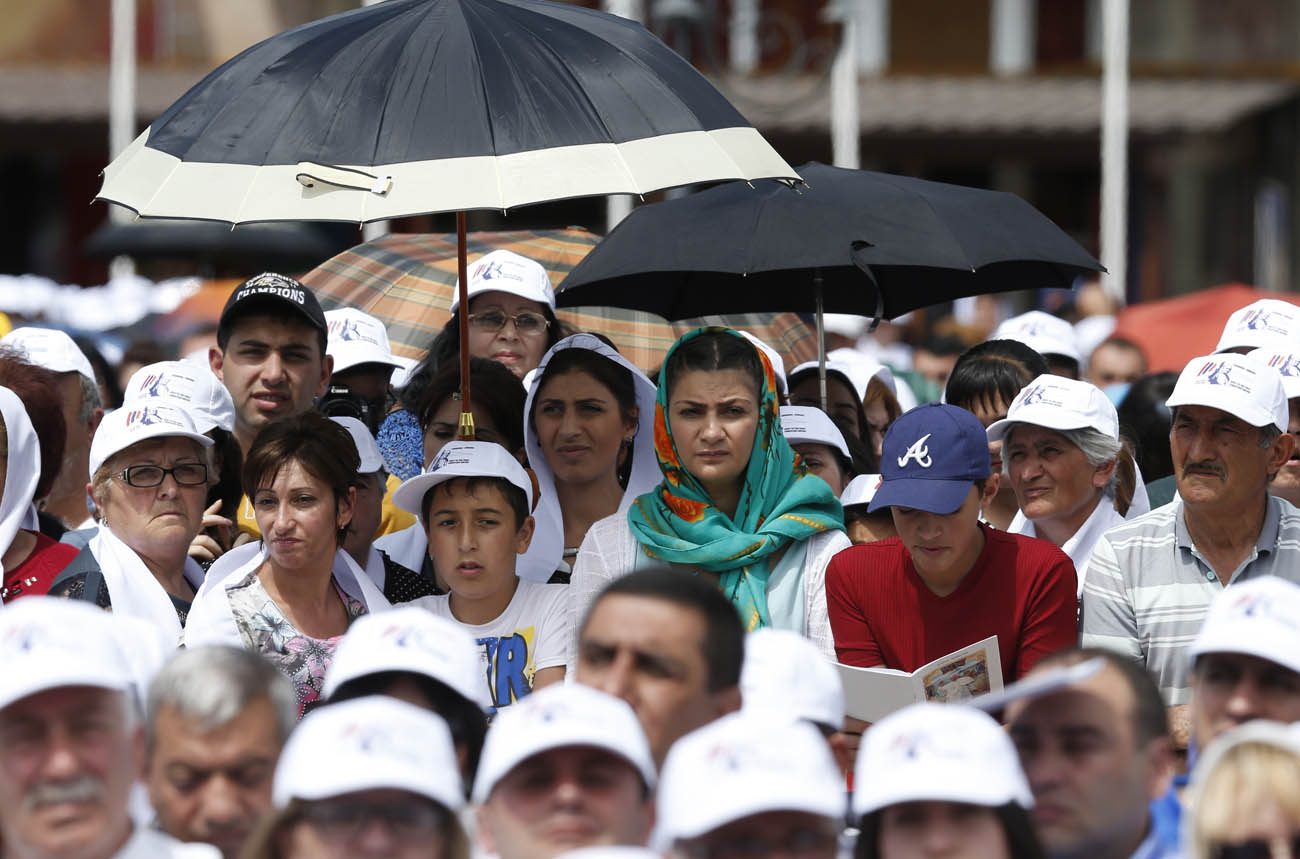 GYUMRI, Armenia (CNS) — Acts of love and kindness must be a Christian’s “calling card,” the characteristic that identifies them more than anything, Pope Francis told Catholics in northern Armenia.

Traveling June 25 to Gyumri, a city with a significant Catholic population and one still bearing the scars of an earthquake almost three decades ago, Pope Francis once again praised the steadfast faith of the Armenian people.

Celebrating the only public Mass scheduled for his three-day visit to predominantly Orthodox Armenia, Pope Francis told thousands of people in Gyumri’s Vartanants Square that memory, faith and merciful love must be the foundations of their lives.

The joy that comes from encountering Christ, he said, “renews our life, makes us free and open to surprises, ready and available for the Lord and for others.”

The exercise of charity renews and rejuvenates the church, he said.

“Concrete love is the Christian’s calling card; any other way of presenting ourselves could be misleading and even unhelpful,” he said, because Christians are called to be known by their love.

Pope Francis urged the Armenian people to continue on the path of dialogue and respect, especially among members of the Armenian Catholic and Armenian Apostolic churches.

During his stay in Armenia, the pope was the houseguest of Catholicos Karekin II, the patriarch of the Armenian Apostolic Church. The catholicos was present for the pope’s celebration of Mass, a gesture the pope was scheduled to reciprocate the next day in Yerevan.

At the beginning of Gyumri Mass, Catholicos Karekin recalled how, during the Soviet period, many churches in Armenia were closed or destroyed. The Armenian Apostolic Cathedral of the Seven Holy Wounds in Gyumri became an ecumenical place of worship with different areas of the church hosting services for the Armenian Apostolic, Catholic and Eastern Orthodox communities.

After Mass, Pope Francis invited the catholicos to join him in the popemobile. They toured the square, both giving the people their blessings.

The need to overcome divisions among Christians and to work for peace in the world was given even greater attention by Pope Francis and Catholicos Karekin during an evening prayer service back in Yerevan.

In the capital’s Republic Square, where crowds had gathered while the sun was still hot, the pope and patriarch processed in together, walking side by side and blessing the people. They stopped to shake hands with Armenian President Serzh Sargsyan.

Pope Francis told the people that he and the catholicos, like all those committed to Christian unity, “look confidently toward the day when by God’s help we shall be united around the altar of Christ’s sacrifice in the fullness of eucharistic communion.”

“Let us pursue our journey with determination,” he said. “Indeed, let us race toward our full communion!”

In working and praying for Christian unity, the pope said, churches are not looking for “strategic advantages” or ways to promote their own interests. “Rather, it is what Jesus requires of us and what we ourselves must strive to attain with good will, constant effort and consistent witness” in order to fulfill “our mission of bringing the Gospel to the world.”

Following Christ’s example, the pope said, “we are called to find the courage needed to abandon rigid opinions and personal interests in the name of the love that bends low and bestows itself, in the name of the humble love that is the blessed oil of the Christian life, the precious spiritual balm that heals, strengthens and sanctifies.”

Together, he said, Christians must work and pray for peace, defending the persecuted — including Christians in the Middle East — but also promoting reconciliation.

Ending a day that began at Armenia’s genocide memorial, Pope Francis prayed that Armenia and Turkey would embark on a new process of reconciliation and that peace would finally come to Nagorno-Karabakh, an enclave in Azerbaijan. The ethnic Armenian majority of Nagorno-Karabakh voted in 1988 to unify with Armenia. Fighting ensured and continued until a cease-fire was reached in 1994, although the enclave’s status was never fully resolved. Sporadic fighting has occurred since, most recently in early April.

In his talk, Catholicos Karekin claimed Azerbaijan started the latest wave of violence with military exercises on the border.

But the patriarch cast his gaze wider, welcoming refugees from Syria and Iraq — nations that traditionally had strong Armenian Christian communities. “With hope in God, they wait for peaceful days to arrive in their native lands,” Catholicos Karekin said.

“May our merciful Lord cleanse the world from the tragedies of evil and grant peace and protection,” he prayed, adding hopes that the biblical prophecy would come true: “They shall beat their swords into plowshares, their spears into pruning hooks, nations shall not lift up sword against nation, neither shall they learn war any more.”

NEXT: Shared faith should lead to joint action, pope and patriarch say