Benedict shows core of priesthood is being ‘immersed in God,’ pope says 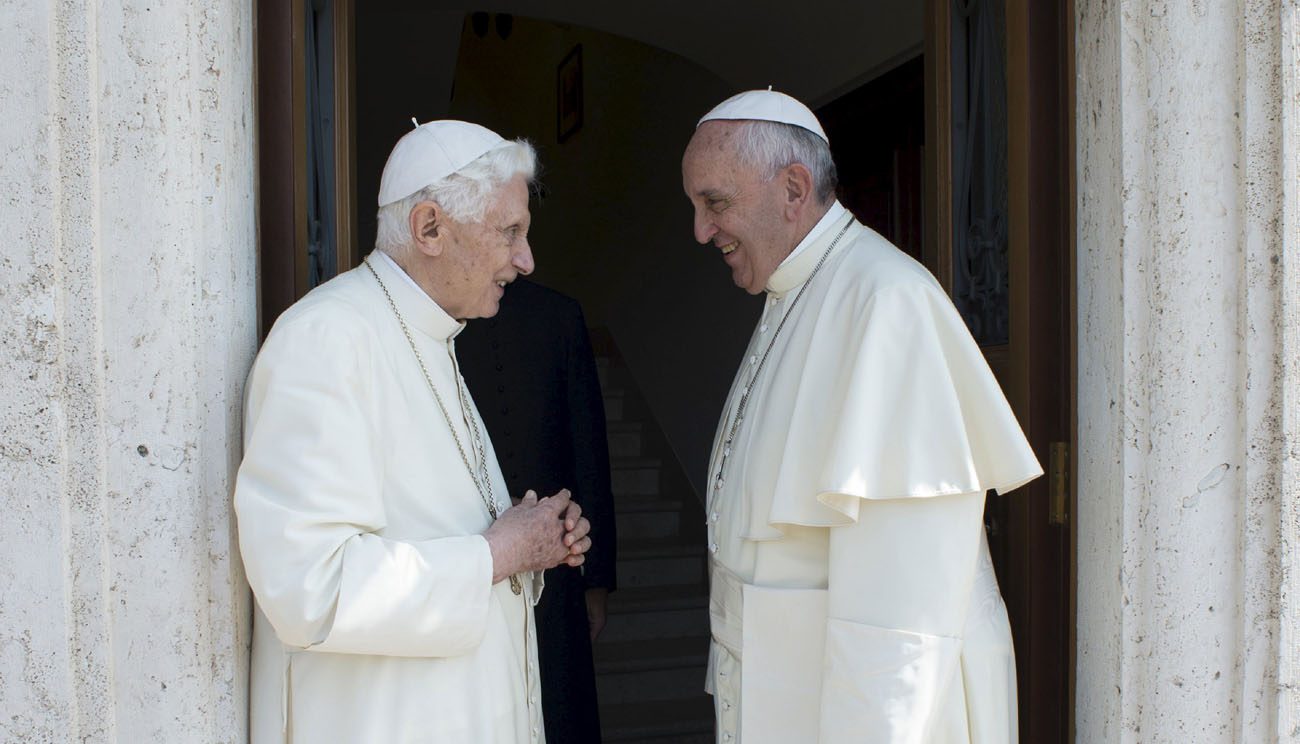 Retired Pope Benedict XVI talks with Pope Francis during a meeting at the Vatican in this June 30, 2015, file photo. Pope Francis has written a preface to a new book, a collection of the retired pope's homilies on the priesthood. "To Teach and Learn God's Love" was to be released in German, Spanish and Italian June 29. (CNS photo/L'Osservatore Romano via Reuters )

VATICAN CITY (CNS) — Pope Benedict XVI’s decision to retire and live a life fully dedicated to prayer represents one of the most important lessons he gives the world’s priests, Pope Francis said.

In retirement, Pope Benedict shows “in an even clearer way” the core of priestly ministry is a life fully immersed in God, something “that deacons, priests and bishops must never forget,” Pope Francis said in a written preface to a new book.

“The primary and most important service is not the management of ‘day-to-day business,’ but praying for others without interruption, body and soul, exactly like the pope emeritus does today — constantly immersed in God.”

The new book, “To Teach and Learn God’s Love,” was to be released in German, Spanish and Italian June 29 — the 65th anniversary of Pope Benedict’s ordination to the priesthood. Pope Francis was scheduled to join Pope Benedict celebrating the anniversary during an audience June 28 in the Apostolic Palace.

The new book, a collection of homilies focusing on the priesthood, was to be published in English by Ignatius Press. Cardinal Ludwig Muller, prefect of the Congregation for the Doctrine of the Faith, wrote the book’s introduction.

Writing the book’s preface, Pope Francis said every time he reads his predecessor’s writings, it becomes more and more clear how Pope Benedict followed and still practices a “theology on his knees.”

Benedict “exemplarily embodies the heart of all priestly action,” which is to be deeply rooted in God, he said.

Without a strong, constant relationship with Christ nothing is true and all organizational prowess and all “presumed intellectual superiority, all money and all power prove useless,” Pope Francis wrote. Without Christ everything becomes routine, priests just draw a paycheck, bishops turn into bureaucrats and the church becomes an NGO that is ultimately “superfluous,” Pope Francis wrote.

Pope Benedict renounced “the active exercise of the Petrine ministry” and fully dedicated himself to prayer, the pope said. “It is perhaps today, as pope emeritus, that he gives us more clearly than ever one of his greatest lessons of ‘theology on his knees.'”

“With his witness, His Holiness Benedict XVI shows us what true prayer is — not the occupation of some people held to be particularly devout and maybe considered little suitable for solving practical problems,” not something to do off-hours or during one’s “free-time,” not something meant to soothe one’s conscience and not a means for getting from God what “we believe we need.”

“No. This book tells us and Benedict XVI gives witness that prayer is the decisive factor” and it is what the church and the world needs now more than ever, he wrote. “Without prayer, the world very quickly loses not only its bearings but also the authentic source of life.”

NEXT: Some Melkite bishops boycott synod, resulting in lack of quorum