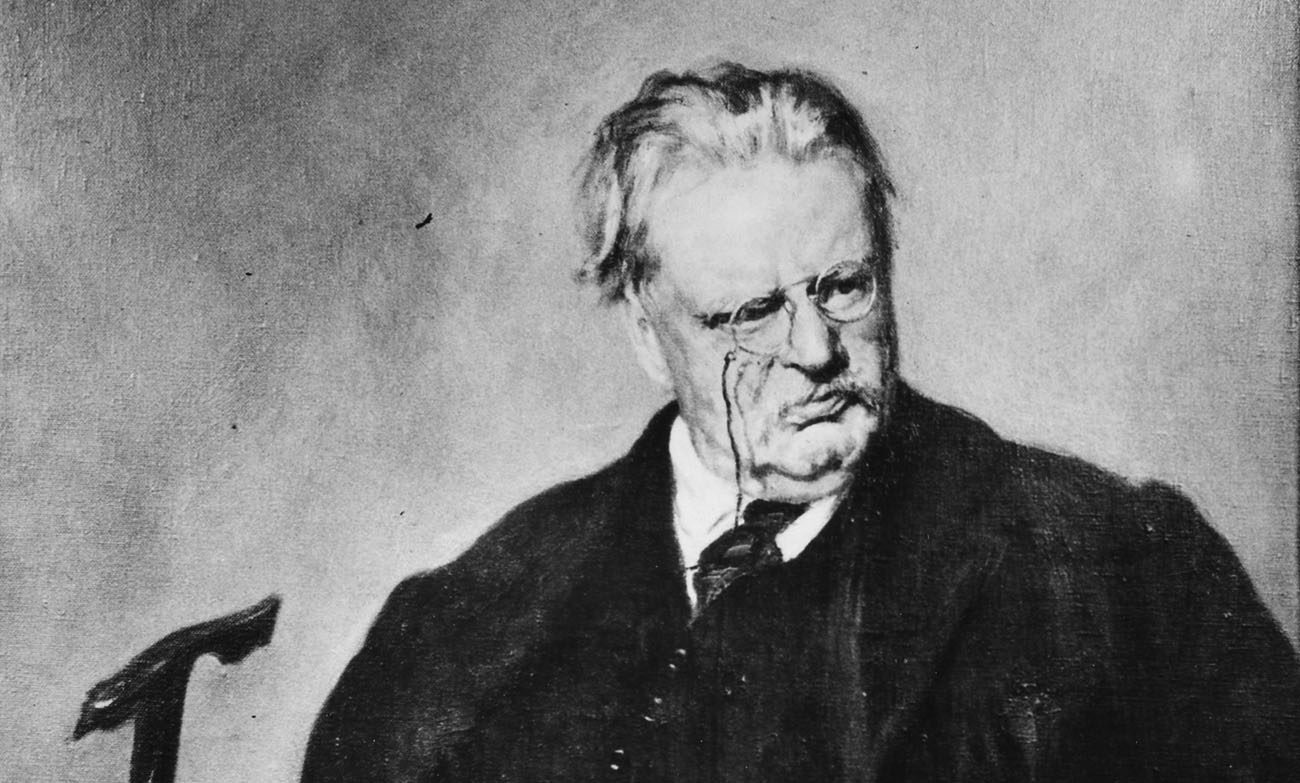 This is an undated portrait of G.K. Chesterton by Edwin Swan. Chesterton (1874-1936) was an agnostic who converted to Catholicism in 1922 and became one of Catholicism's best-known defenders. (CNS photo/John Carroll University)

ROME (CNS) — The eugenics mentality that affirms some human lives are worth more than others did not end with the Nazis, but continues in modern times through abortion and the promotion of contraception, especially in the Third World, said a U.S.-based historian and author.

“Population control is fulfilling the work of imperialism; it is imperialism by another name. When we can no longer control territory, we control populations,” Dermot Quinn, professor of history at Seton Hall University in South Orange, New Jersey, told Catholic News Service.

Eugenics, the controlled breeding of the human race to promote or eliminate certain traits, remains a relevant challenge that must be opposed today as it was by English writer G.K. Chesterton in the early 20th century, Quinn said.

He and Basilian Father Ian Boyd, president of the G.K. Chesterton Institute for Faith and Culture at Seton Hall, were in Rome before traveling to Malta to speak June 10 at a conference on “Chesterton and Eugenics: The Challenge of our Time.”

Research facilities dedicated to eugenics sprang up in Denmark, Sweden, Norway, Switzerland, France and the United States. But, most notably, the idea rose to prominence in Nazi Germany with the passing of the Eugenic Sterilization Law in 1933, which ordered doctors to sterilize anyone suspected of suffering from hereditary disease.

Prior to World War II, however, a belief in eugenics was popular among elites, professionals, scientists and opinion makers, yet it was strongly opposed by Chesterton, a Catholic writer and philosopher.

“Chesterton thought the eugenics movement was based on false anthropology — that is, treating human beings as if they were higher-order animals and breeding-cart horses. But he also saw it, of course, as an assault on the poor,” Father Boyd said. “The people who were passing all this legislation did not mean it should apply to them or to their children. They always legislated as if they were legislating for another species.”

Chesterton’s book, “Eugenics and Other Evils,” was published in 1922.

The author, Father Boyd said, “understood that evil is always introduced with sweet-sounding names; that you put people to sleep. With these euphemisms, you give them chloroform before you attack them.”

Genetic manipulation is a modern example of eugenics-related attitudes that still influence laws, Quinn said. For example, the Human Fertilization and Embryology Act in Great Britain does not address “the moral status of embryos so much as the legal ownership of embryos.”

“Once you frame the question as one of ownership, what you’ve essentially said is that what happens to the embryo is of no intrinsic importance. And that is a very dangerous road to go on,” he said.

Both Quinn and Father Boyd believe Chesterton’s prophetic insight, his defense of life and his care for the poor have influenced the papacy of Pope Francis.

As archbishop of Buenos Aires, Argentina, the pope opened a conference sponsored by the G.K. Chesterton Institute for Faith and Culture in 2006. The pope, Father Boyd said, “loves Chesterton and he honors him.”

“I think you can see in the Holy Father a kind of Franciscan and ‘Chestertonian’ joy in the gift of life itself and that is ultimately what we hope to bring to the attention of our conference in Malta,” Quinn added.

NEXT: Pakistan parish boosts security, including armed guards, after attack