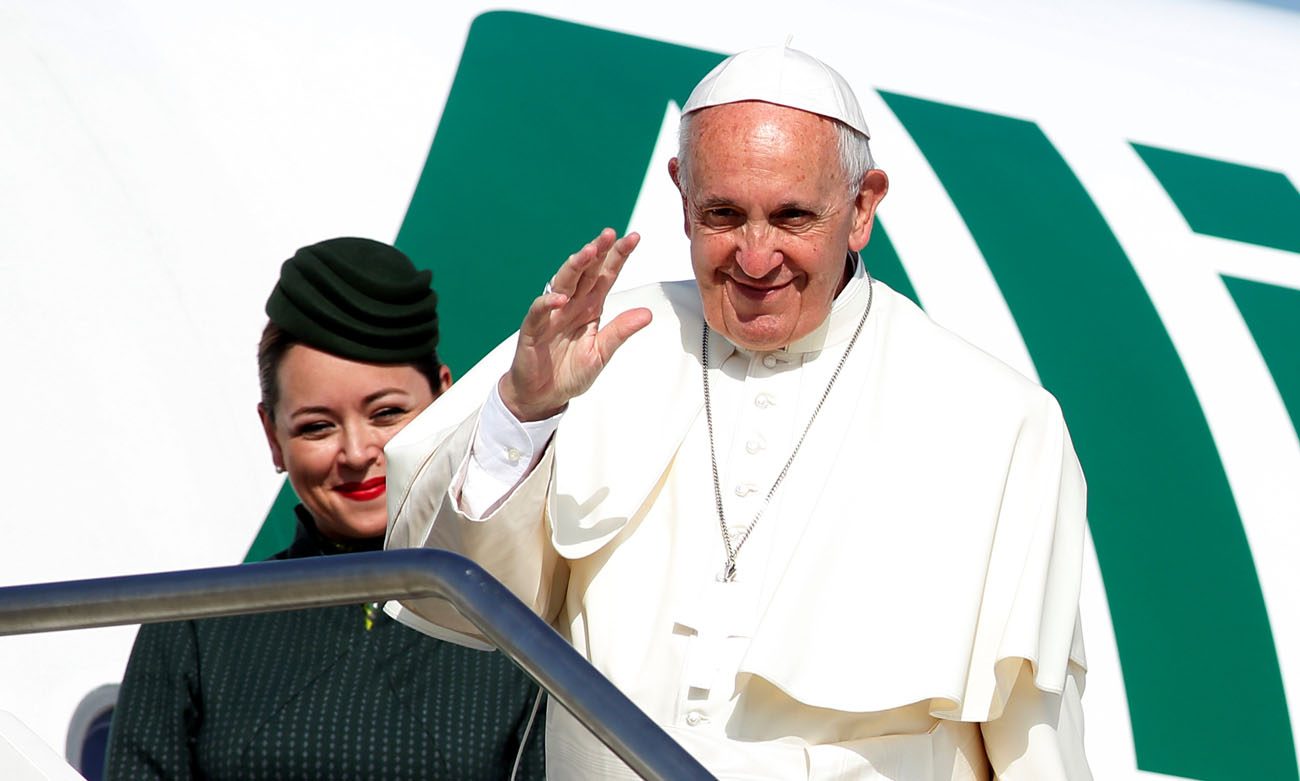 Pope Francis waves as he boards a plane June 24 at Fiumicino Airport in Rome to begins a three-day visit to Armenia. (CNS photo/Remo Casilli, Reuters)

Arriving in Armenia June 24, Pope Francis went straight to the twin concerns of his three-day visit: Promoting Christian unity and honoring the determined survival of Armenian Christianity despite a historic massacre and decades of Soviet domination.

The high profile of the pope’s ecumenical concern and the importance of faith in Armenian culture were highlighted by making the trip’s first official appointment a visit to the cathedral of the Armenian Apostolic Church at Etchmiadzin.

The arrival ceremony at the airport was defined as informal, but featured a review of the troops and a greeting by a young boy and a young girl, who offered Pope Francis the traditional gifts of bread and salt. His entrance into Holy Etchmiadzin, as it commonly is known, was heralded with the pealing of church bells. As the pope and patriarch processed down the aisle between crowds of flag-waving faithful, a deacon led them, swinging an incense burner.

For the first two events on the papal itinerary, the English translations of the speeches of the pope’s hosts — the Armenian Orthodox patriarch and the country’s president — repeatedly used the word “genocide” to describe the deaths of 1.5 million Armenians at the hands of the Ottoman Turks between 1915 and 1918.

The pope’s prepared text for his speech in Italian used the Armenian term “Metz Yeghern” or its Italian equivalent, “the Great Evil.” However, when speaking, the pope added the Italian “genocidio.”

Turkey objects to the term “genocide” and recalled its Vatican ambassador for about a year after Pope Francis in April 2015 quoted St. John Paul II in describing the massacre as the first genocide of the 20th century.

Pope Francis, visiting the Orthodox cathedral at Etchmiadzin and addressing government officials later at the presidential palace, did not focus on the tragedy, but on the faith of the country’s 3 million people, the need for reconciliation and peace in the region and the role of Christians in showing the world that faith is a power for the good of humanity.

For both nights of his trip, Pope Francis was to be the houseguest of Catholicos Karekin II, patriarch of the Armenian Apostolic Church.

“This sign of love eloquently bespeaks, better than any words can do, the meaning of friendship and fraternal charity,” the pope said.

In a world “marked by divisions and conflicts, as well as by grave forms of material and spiritual poverty,” he said, people expect Christians to provide a witness and example of mutual esteem and close collaboration.

All examples of brotherly love and cooperation, despite real differences existing among Christians, the pope said, “radiate light in a dark night and a summons to experience even our differences in an attitude of charity and mutual understanding.”

Besides being an example of how dialogue is the only way to settle differences, he said, “it also prevents the exploitation and manipulation of faith, for it requires us to rediscover faith’s authentic roots,” defending and spreading truth with respect for the human dignity of all.

Catholicos Karekin echoed the pope’s emphasis on the importance of Christian cooperation “for keeping and cherishing Christian ethical values in the world (and) for strengthening love” which is the only path to true security and prosperity.

He told the pope, “after the destruction caused by the Armenian Genocide and the godless years of the Soviet era, our church is living a new spiritual awakening.” Nearly 90 percent of Armenia’s population belongs to the Armenian Apostolic Church; Catholics, mostly belonging to the Eastern-rite Armenian Catholic Church, make up almost 10 percent of the population.

At the presidential palace later, Armenian President Serzh Sargsyan praised Pope Francis for having used the word “genocide” a year ago. “We don’t look for culprits. We don’t spread accusations,” he said, according to the English text given to reporters. “We simply want things to be called by their names.”

While the pope and president were meeting privately, Armenian public television broadcast images from the Armenian memorial prayer service Pope Francis presided over at the Vatican last year. They included the clip of him using the word “genocide.”

Pope Francis told the president and government officials, “Sadly that tragedy, that genocide was the first of the deplorable series of catastrophes of the past century made possible by twisted racial, ideological or religious aims” that extended to “planning the annihilation of entire peoples.”

Unfortunately, he said, “the great international powers looked the other way.”

“Having seen the depths of evil unleashed by “hatred, prejudice and the untrammeled desire for dominion,” people must make renewed commitments to ensuring differences are resolved with dialogue, he said.

“In this regard, it is vitally important that all those who declare their faith in God join forces to isolate those who use religion to promote war, oppression and violent persecution, exploiting and manipulating the holy name of God,” Pope Francis said.

At a time when Christians are again experiencing discrimination and persecution, he said, it is essential that world leaders make their primary goal “the quest for peace, the defense and acceptance of victims of aggression and persecution, (and) the promotion of justice and sustainable development.”

NEXT: Christianity is the ‘religion of the future,’ cardinal tells Irish audience