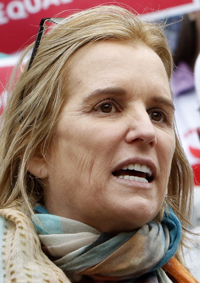 Kennedy said June 4 that her father, Robert F. Kennedy, a New York senator at the time, made “perhaps the most eloquent speech of his life” at the university during his four-day visit to apartheid-ruled South Africa in June 1966.

“Hate is the most destructive power on earth,” Kennedy said June 4, citing the vicious attacks of the insurgent Boko Haram in Nigeria, the Islamic State group in Syria and Iraq, acts of genocide, homophobia and anti-Semitism.

She also criticized Donald Trump, the presumptive Republican nominee for U.S. president, as he campaigns on a platform of hatred against Mexicans, Native Americans, women, immigrants and Muslims.”

Kennedy, president of Robert F. Kennedy Center Human Rights and author of “Being Catholic Now,” was joined on her May 30-June 4 trip to South Africa by about two dozen family members, including her three daughters, and several members of the U.S. Congress.

While “the pain of apartheid is far from over” in South Africa, “no country has done more to show the world how to address entrenched, legalized hatred,” Kennedy said.

Her father’s talks in South Africa about freedom, equality and justice were informed by the U.S. civil rights struggle, which he believed “would be won through law,” Kennedy said, noting that there was no one the elder admired more than Rep. John Lewis, D-Georgia, who with his fellow Freedom Riders defied local laws, “risking imprisonment, torture and death.”

Lewis was one of the members of Congress on the trip.

Prior to Kennedy’s address, Lewis was speaking to the audience when six student protesters entered the hall and stood silently in front of the stage holding mostly anti-U.S. placards. The demonstration formed part of countrywide student protests against discrimination that began late in 2015.

“I knew and truly loved Robert Kennedy,” Lewis said, noting that the two had been together in April 1968 when they received the news that the Rev. Martin Luther King Jr. had been assassinated and that Kennedy had inspired people to be brave and bold.

“We have a moral obligation to speak up” against injustice, Lewis said.

Noting that the “tentacles of economic injustice are long,” Kennedy said that “today, even 22 years after the apartheid system was dismantled, the economic oppression of one of the most cruel systems of mass disempowerment continues in full swing.”

Literacy and mathematics understanding are low in South Africa, where only half the number of children who start school in grade one complete grade 12, she said.

The challenge faced by today’s students is “not that of civil liberties,” but is “no less than sweeping down the mightiest walls of economic oppression and resistance,” Kennedy said.

Post-apartheid South Africans have freedoms, not as gifts but “because they are enshrined in law,” she said, noting that “South Africa has the greatest constitution on the face of the earth.”

Her father’s words 50 years ago — “if you can sweep away unjust privilege, all of us will take heart; if you cannot, the shadow will be felt everywhere” — are equally relevant to young people in South Africa and the U.S. today, Kennedy said.

Robert Kennedy, who had served as attorney general, was assassinated at age 42 in California while running for the Democratic presidential nomination in the 1968 election. His death on June 6 was exactly two years after his University of Cape Town speech, part of which is inscribed on his gravesite at Arlington National Cemetery outside of Washington: “Each time a man stands up for an ideal‚ or acts to improve the lot of others‚ or strikes out against injustice‚ he sends forth a ripple of hope. And crossing each other from a million different centers of energy and daring, those ripples build a current which can sweep down the mightiest walls of oppression and resistance.”