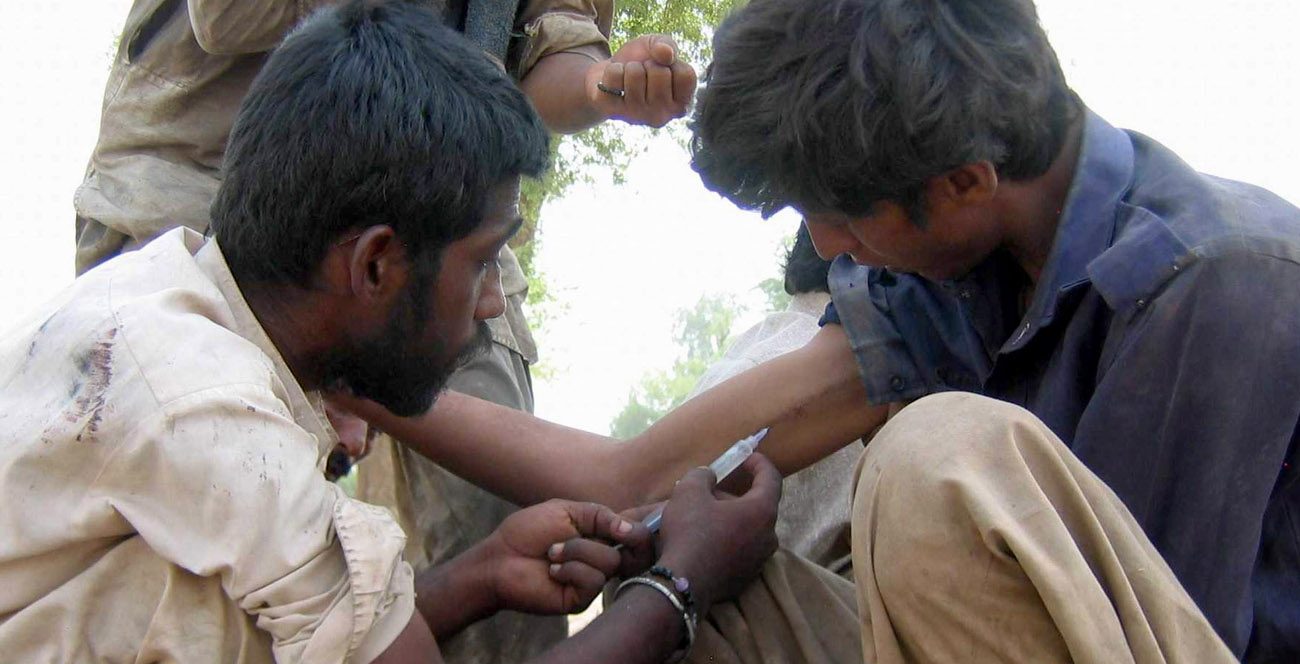 A Pakistani man injects a heroin-filled syringe into a man in 2011 on the streets in Multan. (CNS photo/MK Chaudhary, EPA)

VATICAN CITY (CNS) — Pope Francis has requested a special study session at the Vatican to look at how to solve the growing problem of drug abuse, especially narcotics.

Leading experts from around the world are being invited “to examine and discuss possible innovative socio-political solutions” to drug use, abuse and prevention, a papal academy said.

“Following a special wish of Pope Francis, the Pontifical Academy of Sciences is organizing a two-day workshop” Nov. 23-24 on the global problem of and solutions to the abuse of narcotics, according to the academy’s website, www.casinapioiv.va. Narcotics or opiates include heroin, oxycodone, hydrocodone, codeine and morphine.

The program will look at the history of drug use; how drugs are being produced, distributed and consumed; and preventing substance abuse, especially in children and young people, the website said.

“Drugs are one of the scourges of our globalized world, despite the enormous resources employed all over the world to fight drug trafficking and production,” it said.

The workshop will look at the “relatively easy production of drugs in cities, slums and the countryside;” ways to fight the conditions fostering drug use; children being exploited by crime networks involved in the narcotics trade; and the effect legalizing “soft” or recreational drugs has had on communities.

It will also focus on scientific aspects, such as the effects of hard and soft drugs on the human body and brain “as well as the potential medical uses of certain drugs for specific diseases and disorders.”

“Leading professionals, scientists, experts, medical doctors, researchers, practitioners, members of civil society, judges” and members of the pontifical academy are being invited to attend the workshop, it said.

When speaking to the U.N. General Assembly in 2015, Pope Francis said the narcotics trade was waging a new kind of war on society, calling it “a war which is taken for granted and poorly fought” in part because of corruption on multiple levels. “Drug trafficking is, by its very nature, accompanied by trafficking in persons, money laundering, the arms trade, child exploitation and other forms of corruption,” he said.

When meeting drug enforcement personnel in 2014, he also condemned the legalization of recreational drugs, saying such measures were “not only highly questionable from a legislative standpoint, but they fail to produce the desired effects.”

“No to every type of drug use. It is as simple as that,” he said.

“Drug addiction is an evil, and with evil there can be no yielding or compromise. To think that harm can be reduced by permitting drug addicts to use narcotics in no way resolves the problem.”