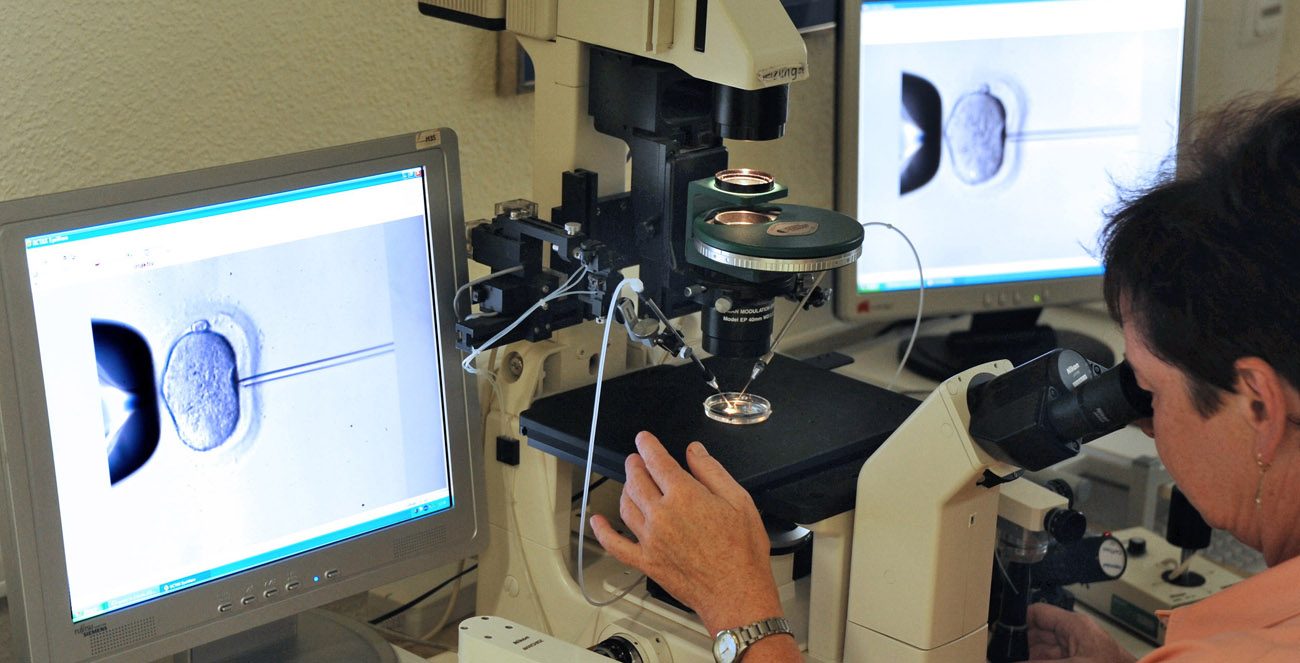 Verona Blumenauer, director of the Kinderwunschzentrum Leipzig Laboratory in Germany, inspects the microinjection of sperm into an egg cell using a microscope in this July 2011 photo at the in vitro fertilization clinic. (CNS photo/EPA)

OXFORD, England (CNS) — Swiss Catholic Church officials deplored the approval by voters of a modification to the country’s in vitro fertilization law that would permit genetic testing of embryos, allowing imperfect human embryos to be discarded.

The president of the Swiss bishops’ conference called the revision in voting June 5 “a step backwards.”

“It jeopardizes the full protection of human life,” Bishop Charles Morerod of Lausanne, Geneva and Fribourg said in a statement.

“It is important for us to reassure handicapped people that we believe in their full dignity and rejoice that their lives are accompanied by help from many others. Recognizing the full dignity of all human beings, above all the most vulnerable, is essential for a just society,” he said.

The measure will allow embryos to be stored and screened for genetic defects before implantation. It was approved by 62.4 percent of voters June 5. Switzerland, with about 44 percent of its 7.1 million citizens identifying as Catholic, is the last European country to approve the practice.

Bishop Morerod said medical research should be “creative and innovative” in finding ways “to accept every life and cure diseases.”

However, he added that the newly legalized practice would eliminate life “instead of dealing with people,” in apparent violation of Switzerland’s 1999 federal constitution, which states in its preamble “the strength of a people is measured by the well-being of its weakest members.”

Experts said genetic testing would help eliminate chromosomal abnormalities such as Down syndrome, and involve the storing of 12 embryos for each treatment cycle.

The vote defied warnings by the bishops’ conference in April that the measure raised “serious ethical problems” by arbitrarily increasing the number of “stored embryos,” as well as by selecting “who deserves to live” and stigmatizing those already living with disabilities.

In another vote, the Catholic Church’s Justice and Peace Commission welcomed the approval of a modification in Switzerland’s asylum law that will allow quicker processing of applications and free legal advice and representation for asylum seekers. The measure was approved by two-thirds of voters.

“Compliance with the rule of law and a guarantee of fair procedures is an absolute ethical necessity — the concrete implementation of these guidelines will show how serious we are about respecting asylum as a fundamental right,” the commission said June 5.

“The global challenges of war, flight, expulsion and migration can only be resolved jointly in an equitable way by the international community,” the commission’s statement said. “The foreclosure of individual countries and regions is not acceptable.”

NEXT: Pope, Council of Cardinals discuss decentralization of Vatican offices