‘We are proud of Mother Teresa,’ Albanians say of future saint 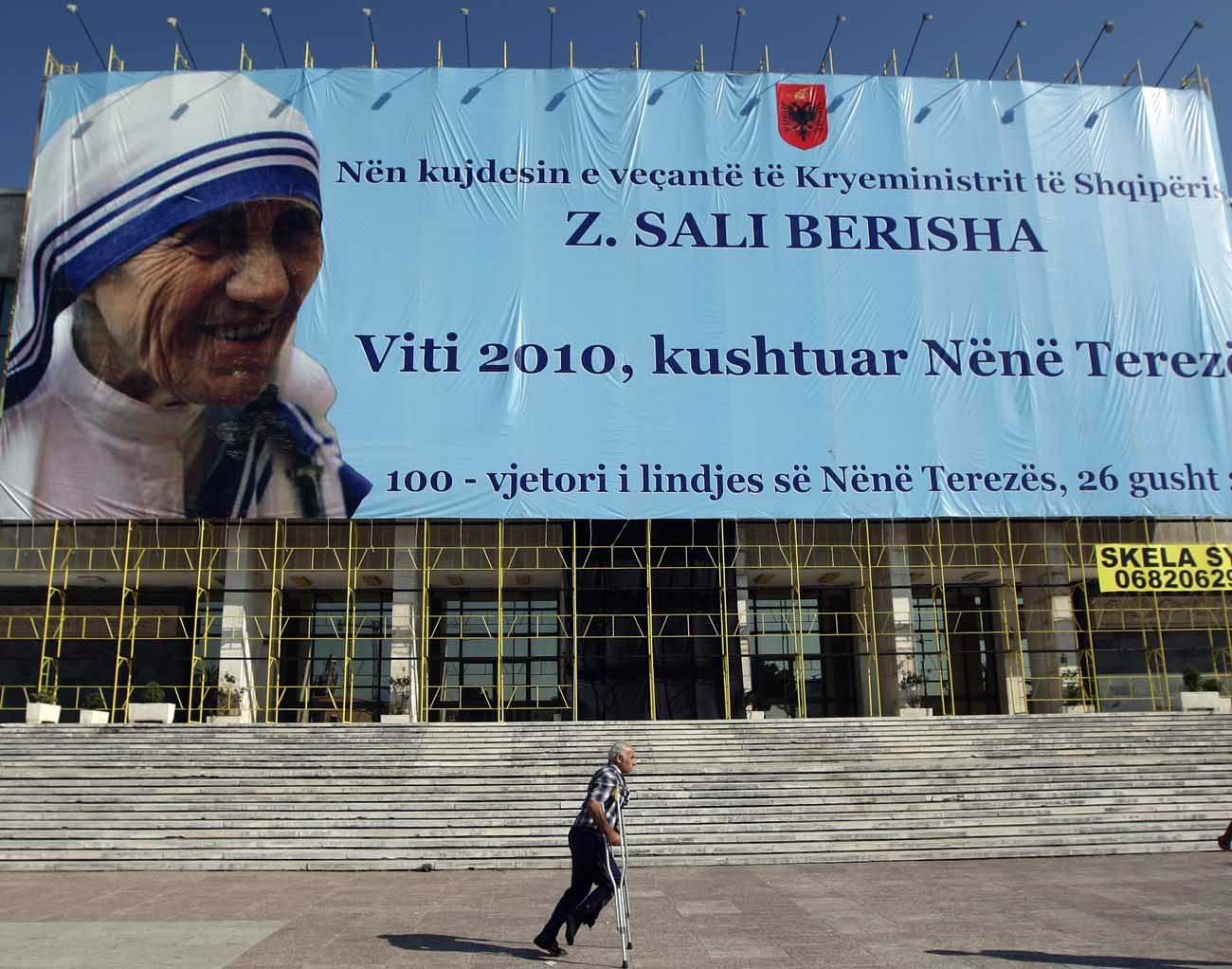 A man on crutches passes a large banner of Blessed Teresa of Kolkata in 2010 in Tirana, Albania. Mother Teresa, founder of the Missionaries of Charity who won the Nobel Peace Prize in 1979, will become a saint Sept. 4. (CNS photo/Armando Babani, EPA)

TIRANA, Albania (CNS) — Blessed Teresa of Kolkata is everywhere in Albania. The international airport outside the capital, Tirana, is named for her, as is the city’s main hospital and second-largest public square.

Sculptures of the famous nun stand at intersections and peer down from churches across the nation of 3 million people. Her photos are taped to storefronts and hotel entrances and can even be spotted inside the windshields of taxis and private cars. October 19, the day she was beatified in 2003, is a public holiday.

“She has made so many benefits for all the world,” said Anila Kika, a government economist.

Mother Teresa, who won the Nobel Peace Prize in 1979 and will become a saint Sept. 4, was “loved in Albania” for her years of charity work in some of the poorest parts of India and around the world, Kika told Catholic News Service in an interview on a downtown Tirana street.

The fact that the nun was originally Albanian made this love — and pride — for her even stronger among Albania’s people, believers and nonbelievers alike, said Kika, an Orthodox Christian.

“We all went out to greet her,” when Mother Teresa visited Albania in 1991, said Kika. “All Albania … we are proud of Mother Teresa.”

Born to an ethnic Albanian family in Skopje, in what is now part of Macedonia, Mother Teresa went to India in 1929 as a Sister of Loreto and became an Indian citizen in 1947. She founded the Missionaries of Charity in 1950.

Shortly after she died in 1997, St. John Paul II waived the usual five-year waiting period and allowed the opening of the process to declare her sainthood.

Sept. 4, the date chosen for her canonization, is the eve of the 19th anniversary of her death and the date previously established at the Vatican for the conclusion of the Year of Mercy pilgrimage of people like her, who are engaged in works of mercy. 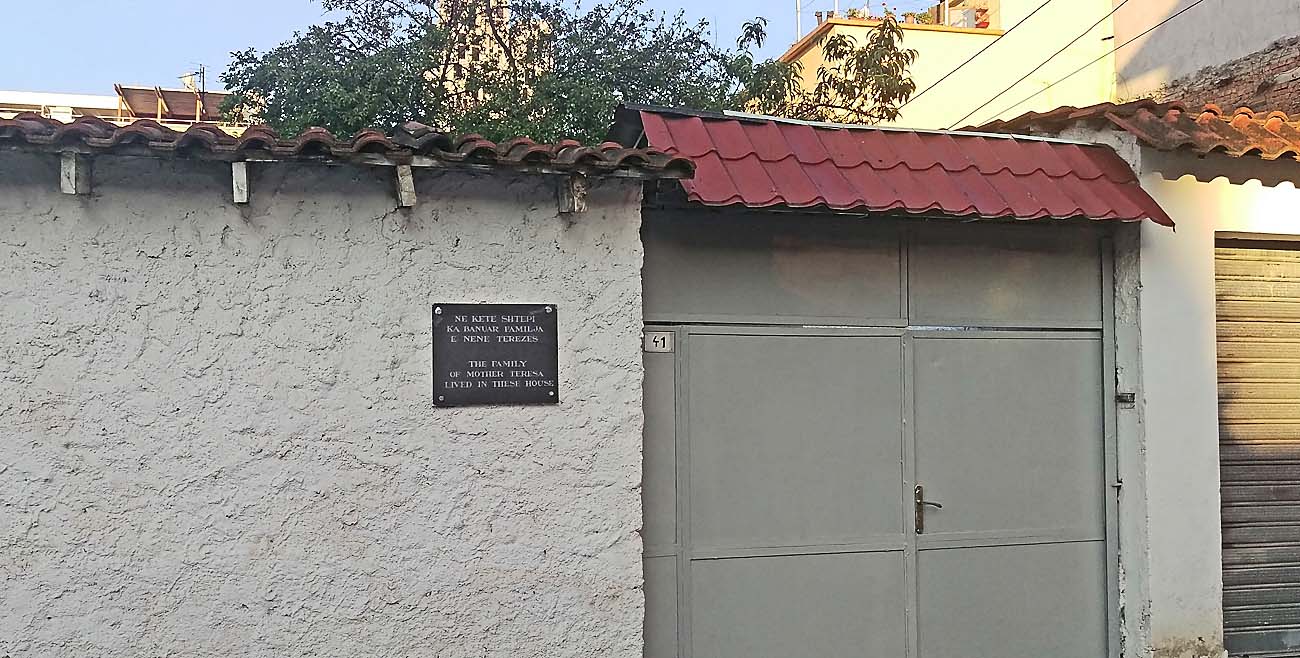 A plaque marks the home in Tirana, Albania where relatives of Blessed Teresa of Kolkata once lived. The ethnic Albanian founder of the Missionaries of Charity will be canonized Sept. 4 at the Vatican. (CNS photo/James Martone)

“There will be celebrations in Rome,” said Sister Rosita, a Missionaries of Charity nun who, along with two of her colleagues, was busy preparing for an evening confirmation Mass by pinning flowers, ivy and white ribbons on the pews of Tirana’s Sacred Heart Church. Mother Teresa visited the church on her 1991 trip, and her portrait covers a portion of a side wall.

“We are all very happy,” about Mother Teresa’s canonization, but plans for local festivities are “not yet” decided, said Sister Rosita, a native of Slovakia.

Sister Rosita said that she and the two other Missionaries of Charity lived in a place nearby, serving the needs of Albania’s most vulnerable, such as elders with no family, and abandoned and orphaned children, in line with Blessed Mother Teresa’s famed ethic of working with “the poorest of the poor.”

She mentioned that relatives of Mother Teresa had also lived in a house not far from the church, “a long time ago.”

At the indicated home, no one answered, but a marble plaque to the left of the front entrance read in Albanian — and flawed English — that “The Family of Mother Teresa Lived in These House.”

“They were friends with my mother,” said a man, walking by. He appeared to be anywhere from 60-70 years of age and declined to give his name. He said he repaired bicycles for a living, and that he remembered Mother Teresa’s visit to Albania 25 years ago.

“Nene Terezes,” as she is known in Albanian, “is famous here,” he said.

Catholic seminarian Gasper Kolaj, 25, agreed. Not only was Mother Teresa of Kolkata a well-known figure in Albania, she was famous globally and had put her country of origin on the international map, he said.

“It is (Blessed Teresa of Kolkata) who made the world know Albania,” said Kolaj, noting that he had grown up listening to stories his parents and other older relatives told about the country’s former communist and militantly atheistic regime, and about the religious persecution it had waged from 1944 to the early 1990s.

Pope Francis recently designated as “martyrs” 38 Catholics who had been killed for their faith in Albania during those years, Kolaj continued, adding that “St. Teresa, and now these martyrs … are a testimony that those who believe, never lose.”

Arta Sino, a receptionist in a Tirana hotel, said she’d heard the news from some hotel guests and on television about Mother Teresa’s upcoming canonization and found it interesting

She explained that since the 1990s, Albanians were steadily rediscovering the religious roots of their ancestors who had lived before communism, when Muslims and Christians, like today, were free to worship. Sino said she had been “empty” until five years ago, when “I heard (the Muslim Holy Book) Quran … and I realized there was life after death.” Now, she said, as a Muslim she prays five times daily.

She described Mother Teresa as “a good woman,” but expressed concern the future saint had never married.

“God created people to have families, but (Mother Teresa) closed her life to marriage. Why do Catholic (nuns) do that?” asked Sino.

Kika, the government economist, said she had “heard many examples of miracles” performed by Catholic saints, something she said economically strapped Albania really needed.

Asked if she was implying Mother Teresa might soon be in a position to boost the country’s finances, Kika responded “Why not?”

PREVIOUS: Bishop says ‘Brexit’ could lead to loss of funds for aid agencies