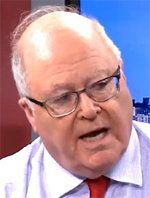 James Kenney was elected mayor of Philadelphia. He seems to think that gives him the authority, or qualifications, to run the Catholic Church in his city. It does not.

Yesterday, Kenney ripped Philadelphia Archbishop Charles Chaput as “not Christian.” (“Jesus gave us gift of Holy Communion because he so loved us. All of us. Chaput’s actions are not Christian.” — from Twitter.com, July 6.)

The archbishop’s offense? He issued pastoral guidelines reiterating Catholic teaching on marriage, family, and reception of the Eucharist.

There is nothing new in Chaput’s document. It merely calls — as the Church always has — for clergy to provide pastoral care for those living in relationships outside its teachings, while upholding the integrity of the sacraments.

“Anything less,” Chaput correctly observed, “misleads people about the nature of the Eucharist and the Church.”

Kenney disagrees. Fine. But it is an abuse of his office to use his platform as mayor to publicly intrude on what is clearly an internal church matter. And it is far from the first time he has used his position as a government official to attack the Catholic Church.

In what Philadelphia Magazine termed “Jim Kenney’s Long War with the Archdiocese,” he has criticized as “cowardly men” archdiocesan officials who determined that a woman in a homosexual marriage could no longer teach religion in a Catholic school. Prior to Pope Francis’ visit to Philadelphia last September, Kenney tweeted, “The Arch don’t (sic) care about people. It’s about image and money. Pope Francis needs to kick some ass here!”

And he criticized the archdiocese for closing 49 Catholic schools — even though in recent years he has become a vocal opponent of school vouchers, abandoning his past support of a voucher program that may have helped keep those schools open.

Kenney labels Archbishop Chaput un-Christian for upholding Catholic teaching. The mayor is demonstrably un-American in misusing his public office to conduct his personal war on the Catholic Church.

William Donahue is president of the New York-based Catholic League for Religious and Civil Rights, on whose website this article first appeared and is posted here by permission.

PREVIOUS: Making investments that work for the poor

NEXT: Remembering Elie Wiesel and the unborn