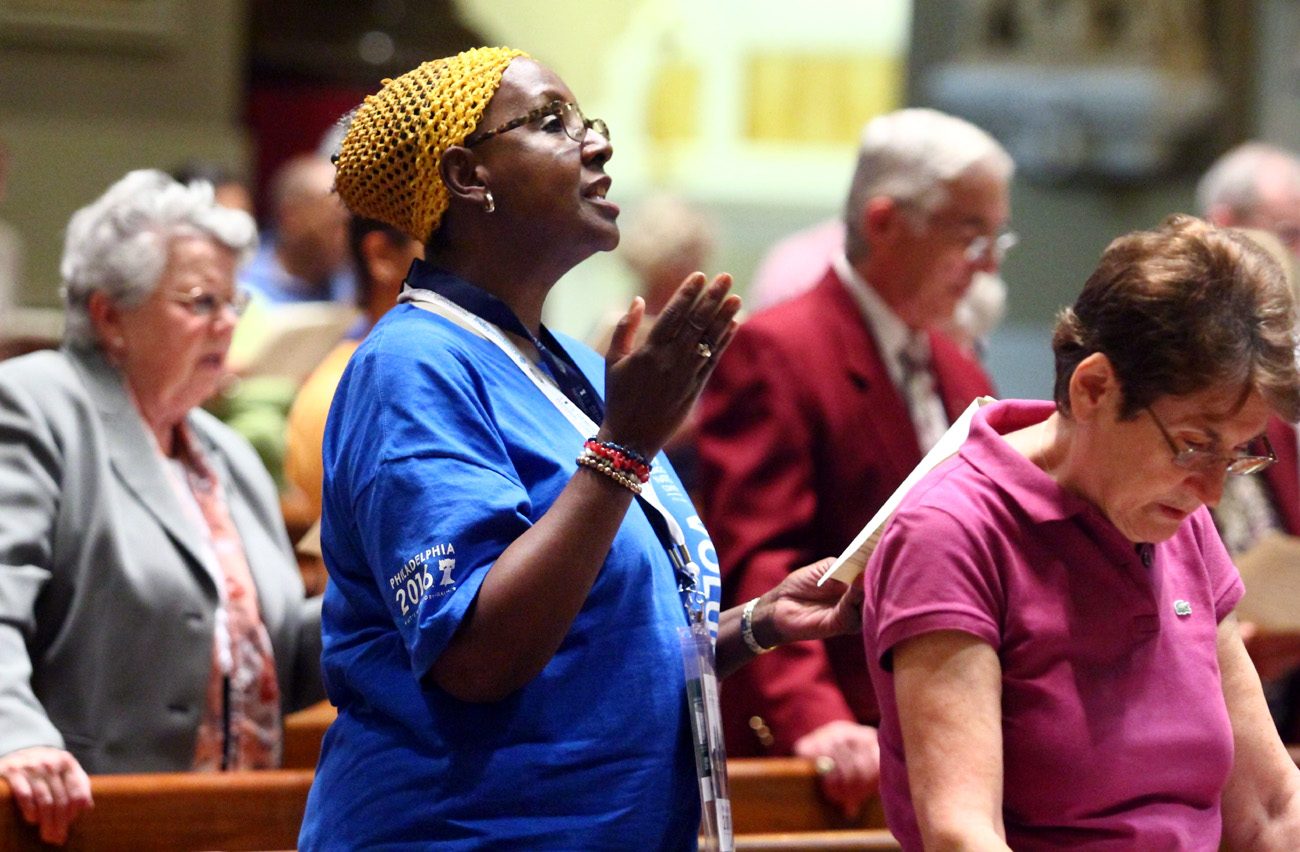 Janet A. Mills, a volunteer for the Democratic National Convention in Philadelphia and a member of Janes Memorial United Methodist Church in the city's Mount Airy section, raises her voice in song at the Interfaith service of Prayer for the Nation July 25 at the Cathedral Basilica of SS. Peter and Paul, Philadelphia. (Photo by Sarah Webb)

Visitors to Philadelphia for the Democratic National Convention who might have wandered into the Cathedral Basilica of SS. Peter and Paul on Monday afternoon, July 26, were given a respite of quiet interfaith prayer, away from the noisy exuberance and sometimes controversy that are part and parcel of a national political convention.

The Interfaith Service of Prayer for the Nation was sponsored by the Philadelphia Liturgical Institute, an ecumenical collaboration in the city. Father G. Dennis Gill, rector of the cathedral, was the presider and homilist for the service and Dr. Russell Mitman, pastor of the United Church of Christ in Phoenixville and chief officer of the institute, was the convener.

Although the institute is ecumenical in nature, focusing on Christian worship, the prayer service for about 70 worshipers encompassed all faiths through its Scripture readings and musical selections.

In addition to the readings and prayers from sacred texts and a short homily by Father Gill, the music was augmented by the talented Cathedral Basilica Choir. Congregational singing was led by cantor Charlene Angelini, who was the cantor for the Mass celebrated by Pope Francis on the Benjamin Franklin Parkway last October.

The Philadelphia Liturgical Institute is composed of pastors, teachers, clergy, religious and lay people whose purpose is to assist congregations in their worship life, explained Dr. Mitman after the service.

“We were asked by the DNC to do this and we thank the cathedral, Archbishop Charles Chaput and Father Dennis Gill for their hospitality for granting us wonderful sacred space for the service,” he said. “I think it went very well and it was great that we could create for the people an opportunity to pray for peace and hope in the midst of all the rancor and muddle of the political scene.”

Those sentiments were echoed by Father Gill. “Things went well today,” he said after the service. “This was an invitation for people of all faiths to come together and pray, trusting in God to help our culture. We need to walk in that faith.”

Janet Mills, a Methodist laywoman who had spent her morning as a volunteer checking credentials at the convention itself, found the service indeed a respite after what was a very hectic experience.

“The service was wonderful, a reminder that we are all people of God,” she said. “I loved the experience. I loved the singing, especially ‘Amazing Grace’ and ‘God Bless America.’” 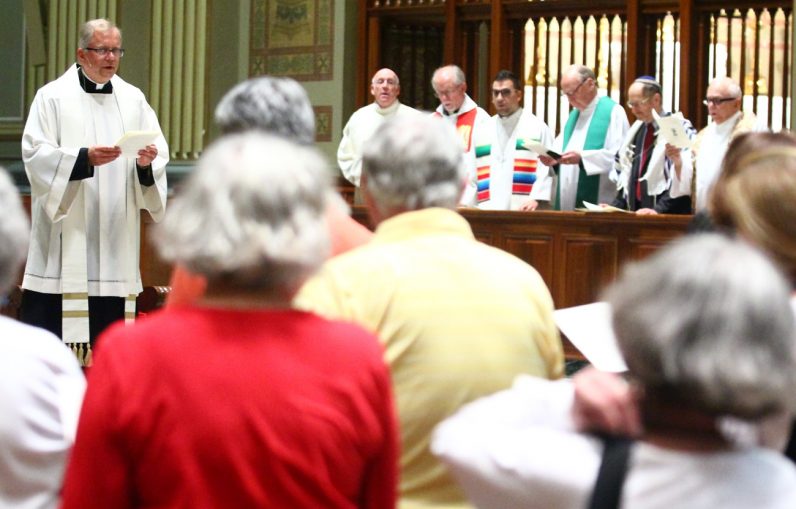 Clergy from Christian and Jewish congregations in the Philadelphia area, led by Father G. Dennis Gill (left) of the Cathedral Basilica of SS. Peter and Paul, pray during the interfaith service at the cathedral July 25 during the Democratic National Convention in Philadelphia. (Sarah Webb)

NEXT: Nuns on the Bus workshops in Philadelphia prompts dialogue on issues