Nuns on the Bus workshops in Philadelphia prompts dialogue on issues 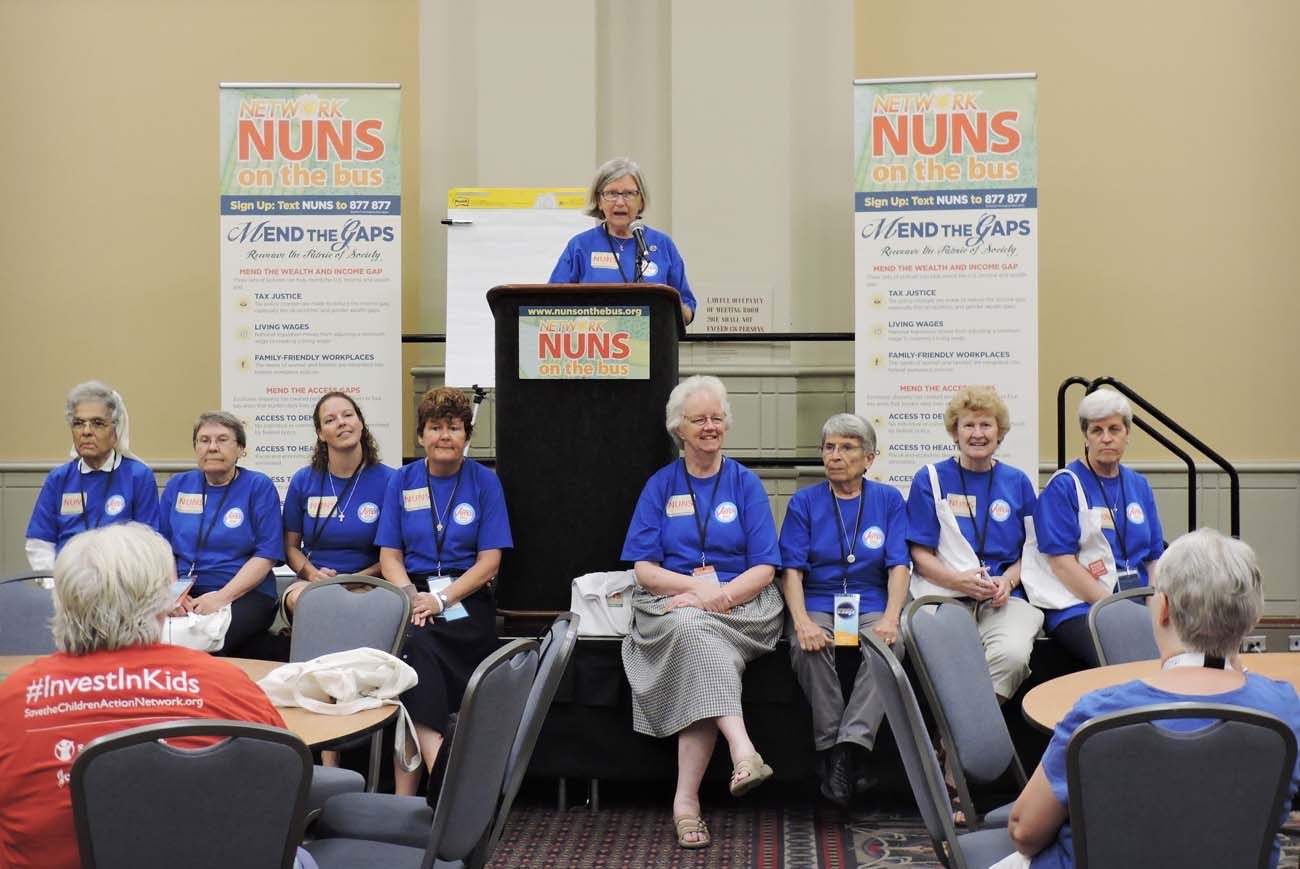 Sister Simone Campbell, a Sister of Social Service, stands at the podium July 26 during a workshop sponsored by the Nuns on the Bus campaign at the Pennsylvania Convention Center in Philadelphia. (CNS photo/Elizabeth Evans)

PHILADELPHIA (CNS) — Looking out at the attentive faces gathered around tables in a room at the Pennsylvania Convention Center in Philadelphia, Sister Simone Campbell used words of encouragement and challenge to open a Nuns on the Bus workshop July 26.

“What this workshop is about is generating hope, generating a vision. … we are part of a movement to mend the gap. Are you game?” she asked those gathered for the first of three workshops the group was holding in Philadelphia.

Before they moved on to facilitate conversations at each table, Sister Simone organized her colleagues, literally one step at a time into a living bar graph, a vivid illustration of the economic disparities that Network, the Catholic social justice lobbying group, is committed to addressing.

The 13-state Nuns on the Bus tour, organized by Network, arrived in Philadelphia a day after the Democratic National Convention convened at the city’s Wells Fargo Center. The tour of women religious planned to hold three days of workshops, July 26-28, and then have a rally July 29.

Sister Simone, a Sister of Social Service, who is Network’s executive director, graciously but firmly kept the first workshop moving at a brisk, well-organized pace, with the aid of a melodious gong.

After each sister briefly introduced herself and her reasons for joining the tour, which began July 11 in Madison, Wisconsin, they dispersed around the conference room to engage participants in brainstorming dialogue meant to focus not solely on itemizing problems, but on imagining potential fixes.

Led by Sister Richelle Friedman, a member of the Sisters of the Presentation of the Blessed Virgin Mary, participants at the health care table tackled a number of topics, including the challenges of paying for insurance and drugs, the need for increased support for caregivers and the advantages of universal coverage.

Topics at other tables included how to provide greater access to the democratic process, make the tax system fairer, and create a more family-friendly workplace. One participant was charged with summarizing group findings for the other tables.

Courtney Rydel, an English professor at Maryland’s Washington College, said that she’s been a fan of Sister Simone ever since she saw her on the Stephen Colbert show a number of years ago.

“Like all good Catholic school girls, I know you listen to the nuns,” she said. “I thought they did a great job providing important facts that we should all be aware of about the realities in this country, and connecting that to our large mission and duties as Catholic Christian in the world.”

As she finished, Sister Simone shared four principles she termed “virtues for the 21st century.” These include cultivating joy; “holy curiosity,” or a commitment to engaging those who think differently; “sacred gossip” or storytelling; and “doing your part,” the ability to take on a particular role without trying to do it all and getting overwhelmed.

Betty Anne Kenney, a suburban Philadelphia resident, had heard Sister Simone speak at Daylesford Abbey in Paoli, Pennsylvania. The four virtues enumerated by Sister Simone were essential, Kenney said, adding that “together we all have a part to do. If we can just discern what that is, and do things together, we can accomplish great things.”

For sisters who participated in the bus trip, certain memories lingered.

For Sister Richelle, they include a transitional housing community that provides parenting skills in Providence, Rhode Island, and the work of a Mercy sister named Joan.

“Some of the women said that they didn’t know where they would be without Sister Joan,” Sister Richelle told Catholic News Service. “I was struck by the dedication of the staff, the women and children’s deep gratitude for what they had received and the respect they had for each other.”

Angie, a woman from Jefferson City, Missouri, who had to balance paying for her blood pressure medication, paying the rest and almost-impossible working conditions, “broke my heart” said Sister Simone, as did some of the women of color she met who were reclaiming their dignity after being homeless while grappling with “blatant” racism, she added.

On the other hand, she notes, there were the encouraging stories — organizations, like one in Newark, New Jersey, that allowed former addicts to reclaim their lives.

The group, which includes almost 20 sisters (though not all made the entire trip), also spent several days in Cleveland, the site of the Republican National Convention.

Besides the workshops, their visit in Philadelphia was to include the hospitality-focused “lemonade ministry” they were taking out to the city streets, offering a refreshing drink and talking with people along the way.