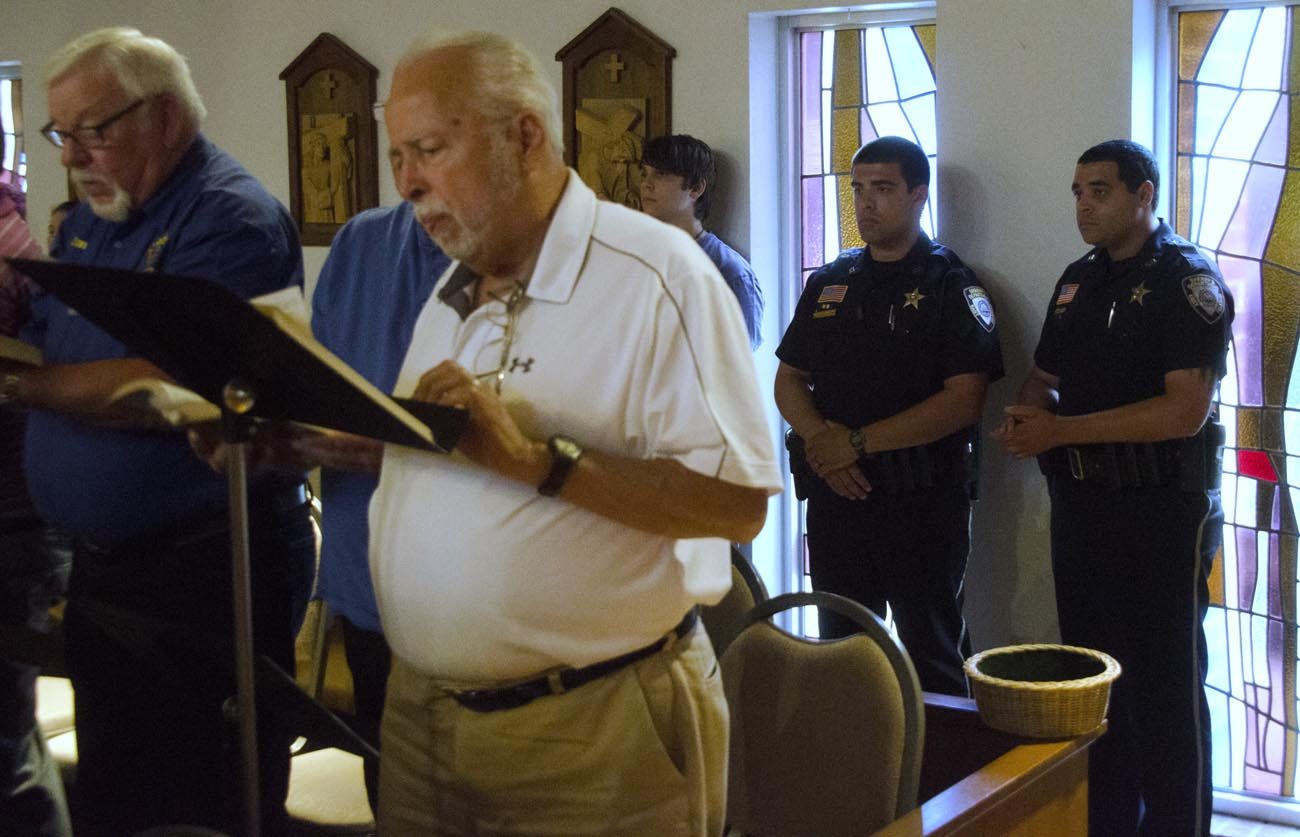 Members of the St. John the Baptist Church choir in Zachary, La., sing while Zachary police officers look on at a prayer service July 17 at the church in Baton Rouge, La. Pastors from several churches of all denominations spoke during the service. Many of those in attendance stayed afterward to pray the rosary. (CNS photo/Richard Meek, The Catholic Commentator)

BATON ROUGE, La. (CNS) — As tragic events have unfolded in the Baton Rouge area, the Catholic community has been at the forefront of helping to spread the message of peace.

From holding prayer services to opening churches to hosting community meetings, Catholic leaders have been involved in every step to reconcile community members in the wake of the police shooting of Alton Sterling in the early morning of July 5 and the shooting of three law enforcement officials July 17.

“I thought coming together in the presence of God and showing our love and support was the right thing to do,” said Father Jeff Bayhi, pastor of St. John the Baptist Church in Zachary, where a prayer service July 17 attracted community members from all races and religious beliefs.

“I love it,” Father Bayhi added of the cultural diversity of the standing-room-only crowd. “It tells you that there is not much separation as the media would like for you to think. Secondly, it tells you the majority of the people aren’t looking to separate each other. We’re looking to bring others together.”

In the days following the death of Sterling, St. Aloysius Church in Baton Rouge held an emotional prayer service that also drew a large crowd. At times, Father Randy Cuevas, pastor, succumbed to the tears he had been fighting as he read a message from Father Josh Johnson, parochial vicar, who is the only African-American priest in the Baton Rouge Diocese.

Divine Word Father Richard Andrus, the pastor, who is a leading advocate of civil rights and justice in the community, said the meeting crossed “every racial, geographical and religious line.”

“People came together, first of all to express their hurt, fear, anger frustration,” he told The Catholic Commentator, newspaper of the Baton Rouge Diocese. “It was a very emotional gathering with tears and hugs of support. It’s a sign that gives me hope.”

He said there was a commitment among those present to find a way together to move forward and heal so that Baton Rouge emerges as “greater than it has ever been.”

“Hope swells (because) of a deeply imbedded faith passed down in the black community generation to generation in the most difficult of times: post slavery, Jim Crow, fight for civil rights, fight for voting rights. It’s that faith, that immersion of self-determination that has allowed us not to give up but to press on even in the most painful, difficult time,” said Father Andrus.

In recent weeks, Catholic leaders have repeatedly issued calls for peace, even during tense standoffs between police and protesters at police headquarters and the site where Sterling was shot. Peace appeared to reign until two Baton Rouge Police officers and an East Baton Rouge sheriff’s deputy were killed at a business off a local highway.

“God is faithful, and because of that, I believe God is (here) in the midst of this confusion and chaos,” said Father Tom Ranzino, diocesan vicar general and pastor of St. Jean Vianney Parish in Baton Rouge. “If I can look above the conflict and see the pattern in suffering and death, we see that Christ is here.

“While we are deeply saddened by the lives taken and angry, we also have to remember that in the midst of this sin, God’s faithfulness is here and that faithfulness is for us and will always be with us.”

While celebrating Mass on the evening of the police shootings, Father Johnson once again addressed racial tensions and violence during his homily.

For Father Johnson, the issue, on the surface, could appear to be a conflict between his African-American heritage and his own faith — especially compounded by the fact his father is a former Baton Rouge police officer. But he finds solace in his own spirituality and commitment to a prayerful life.

“It’s disheartening,” Father Johnson said, adding that he found it interesting that the officers were shot on a day when Baton Rouge Bishop Robert W. Muench announced a week of prayer and fasting in response to the Sterling shooting. “And at the same time I feel even more resolve to do what we can to pray and fast.”

“The authentic Catholic response is to pray and fast,” Father Johnson added. “From there we open ourselves up to hear what God wants us to do next. This is an invitation from the Lord to drop to our knees and consult with the Lord to see what he wants us to do to bring about dialogue with people who are different than us.

The Rev. Stephen Byrd, who is pastor at First Baptist Church in Zachary, was among pastors from throughout the community who joined Father Bayhi to preach the message of hope and peace.

The answer is not a political one, said Rev. Byrd. “The answer is Jesus Christ and the message of his Gospel.”

With God, there is no color, he said, adding that everyone “might as well start getting used to each other because we are going to spend the rest of our (time) together.”

PREVIOUS: Pope to address youth in poor area of Texas via video for World Youth Day

NEXT: Archbishop Gregory to chair USCCB task force on race