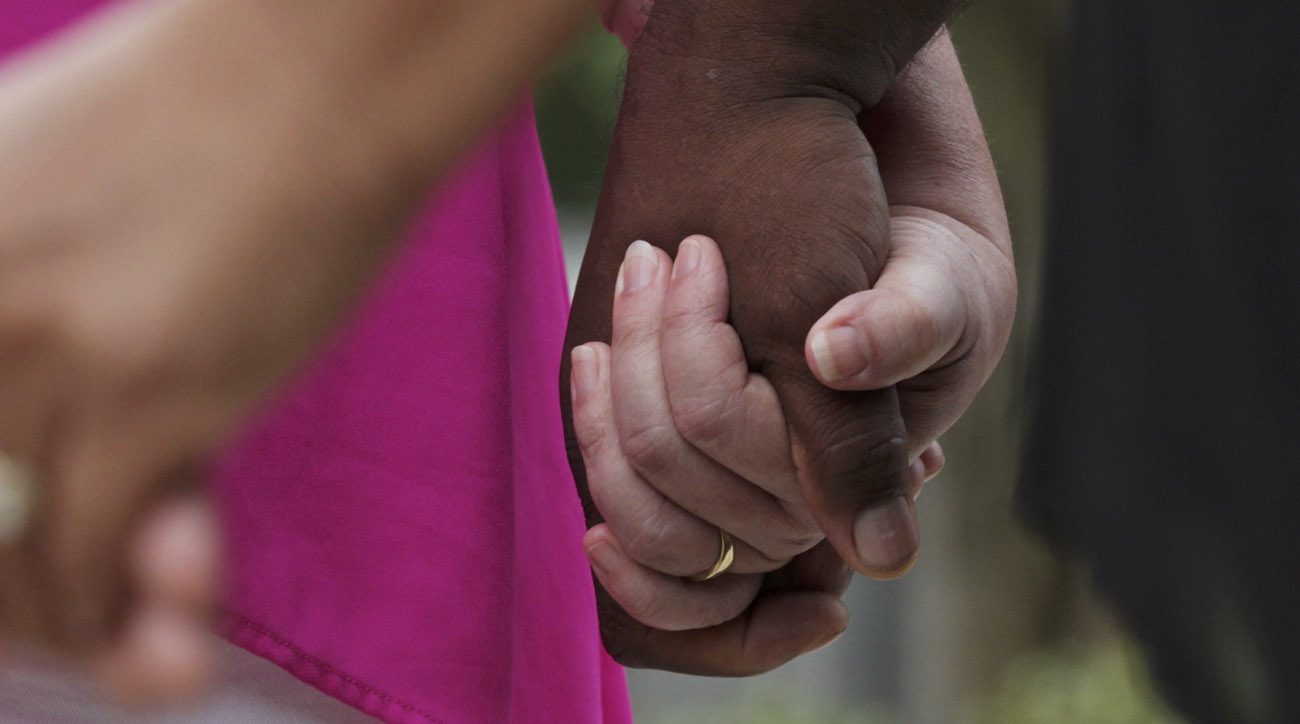 Worshippers hold hands after a July 17 vigil at St. John the Baptist Church in Zachary, La., for the fatal attack on policemen in Baton Rouge, La. (CNS photo/Jeffrey Dubinsky, Reuters)

BATON ROUGE, La. (CNS) — Baton Rouge Bishop Robert W. Muench renewed a call for a diocesan-wide week of prayer, fasting and reflection after the latest fatal shootings in the city, which this time took the lives of three law enforcement officers.

He urged all to “work toward a lasting peace in our communities.”

Early July 17, a former Marine fatally shot three police officers, and wounded three more, one critically, less than a mile from the city’s police headquarters. The gunman, later identified as Gavin Long of Missouri, was killed at the scene, officials said.

Baton Rouge was still reeling from the fatal shooting of Alton Sterling, 37, by police during an altercation outside a convenience store July 5. The first week of July also saw the fatal shooting of Philando Castile, 32, in suburban St. Paul, Minnesota, by police officers July 6, followed by the sniper shooting in Dallas that killed five police officers July 7.

“Words cannot express the emotions we feel for those who have lost loved ones in the tragic events of this day,” Bishop Muench said in a statement. “Their entire lives have been unexpectedly and terribly turned upside down.”

He said he and the diocese’s vicar general, Father Tom Ranzino, visited two of the families affected by the shootings later that afternoon to share “prayer and support in the midst of their shock, horror and grief.” 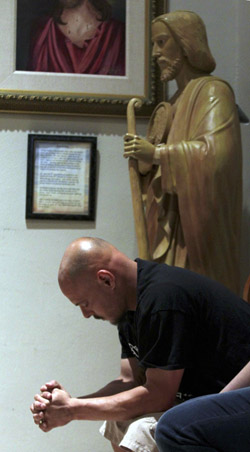 A man prays during a July 17 vigil at St. John the Baptist Church in Zachary, La., for the fatal attack on policemen in Baton Rouge, La. (CNS photo/Jeffrey Dubinsky, Reuters)

In the neighboring Diocese of Houma-Thibodaux, Bishop Shelton J. Fabre said that “our tears are still falling and our fresh and fervent prayers are still ascending to God” over the earlier violence and loss of life in Louisiana when the law enforcement offers were ambushed in Baton Rouge, a diocese “very close to home for us.”

“As a native of New Roads and a priest of the Diocese of Baton Rouge for 17 years, I feel a deep ache in my heart because of recent violence that has happened there,” said Bishop Fabre in a reflection posted July 17 on his Facebook page.

“My sincere condolences to those who have lost loved ones today or in the past weeks in the violence that has occurred in Baton Rouge, Minneapolis, Dallas, Istanbul and Nice,” he said. “Unfortunately, I fear that we as a nation and a world are becoming too accustomed to the tragic events of violence and loss of human life such as has occurred over the past few weeks.”

He said in such times, he is drawn to the Lord’s words to the prophet Isaiah: “Comfort my people.” He said he also chose those words for his episcopal motto “because I feel that deep within the heart of God is a desire to comfort us in our pain.

“Each of us reacts differently to violent tragedy. Some of us may be angry. Violence pierces our hearts and leaves us in pain. Anger flows from pain,” Bishop Fabre said. “For those of us who are angry, I simply remind us that underneath the anger, in the pain, there is God wanting to ‘comfort his people.’

“Some of us may have questions like, ‘Will the violence and killing stop? When will this end?’ Those are great questions. There, in the questions and together genuinely seeking to find answers constructively, we will find God listening to us wanting to ‘comfort his people.'”

He called on all people of Houma-Thibodaux, regardless of their religion or their history, to pray, whether in privacy at home or at a large church gathering.

Bishop Fabre urged people to consider three things in prayer: “First, to each personally pray daily for an end to violence. Violence is a complex evil; however, violence is often propelled by selfishness and self-centeredness. We as people must look ‘outside of ourselves,’ we must turn to God, for it is in him that our true peace lies.”

Secondly, he said people should come together in prayer, and asked every Catholic church in the diocese over the next two weeks to offer a Holy Hour “to pray for an end to violence.”

Thirdly, “let us continue to work together for justice and peace,” Bishop Fabre said.

“As Pope Francis has indicated,” he continued, “we must truly seek to ‘encounter’ those who are racially or ethnically different from us in a real effort to appreciate the countless gifts that unite us, and to seek to address and to solve the problems that challenge and seek to divide us, complicating our lives together. When we learn to ‘see’ people with the eyes of the Lord, we will then move forward in justice and peace.”

In a July 18 statement, the president of the U.S. Conference of Catholic Bishops offered his prayers for the officers and families “affected by the horrible shooting in Baton Rouge.”

The “temptation to respond to violence with violence is strong,” he said, noting that even St. Peter himself lashed out about Christ’s arrest. “Jesus’ response was clear: ‘Put your sword back into its sheath, for all who take the sword will perish by the sword.'”

“As followers of Christ, let us always embrace love and ask ourselves how we can best invite all people of goodwill to live with us in peace,” Archbishop Kurtz said.

Against a backdrop of “complex and varied” reasons for so much suffering, he urged people come together “to address the lingering evil of racism, the need to safeguard our citizens from the present danger of extremism and the overall breakdown of civility.”

The U.S. Catholic Church “will seek out ways to foster this life-saving dialogue,” he said. “Answers will not come easily nor as quickly as we need. We must continue searching and listening until they do.”

In addition to dialogue that “cultivates a true respect for every human being,” Archbishop Kurtz said, “we should also seek ways, large and small, to be a sign of hope in the everyday routines of life.”

“The next time you are pulled over by a police officer or walk past one on the street, thank him or her for their service,” he advised. To those who work in law enforcement, he said, “The next time you make a traffic stop, thank the person for their time.”

He added, “The task of building a society upon the strong foundation of love begins with each one of us every day.”