Churches among those swept up in Pokemon Go craze 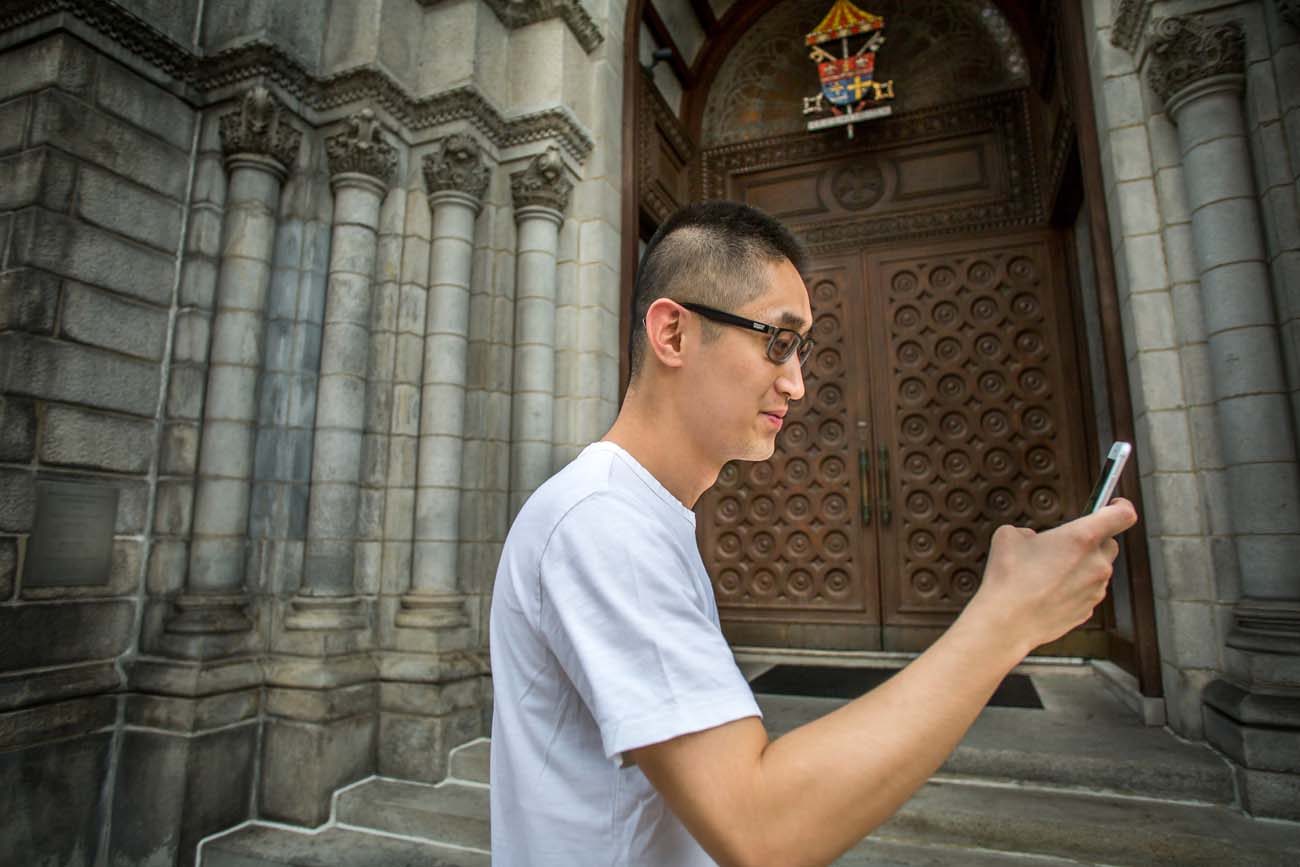 Linyi Cao, a graduate student studying economics at Washington University in St. Louis, hunts for Pokemon Go stops around his neighborhood July 13. He was trying to level up his points so he could join the Gym, as the game calls some locations, around the perimeter of the Cathedral Basilica of St. Louis. (CNS photo/Lisa Johnston, St. Louis Review)

ST. LOUIS (CNS) — Since its release in the United States July 6, Pokemon Go has quickly become a cultural phenomenon.

In the first week, the mobile game attracted nearly 21 million users, according to data from Survey Monkey, making it the most popular app in U.S. history.

As a result, the nature of the game is driving swarms of players to unsuspecting churches, businesses and other landmarks. But as it grows in popularity, priests, youth groups and others are quickly finding opportunities to evangelize to young people.

Pokemon Go uses augmented reality, a real-world environment that incorporates computer-generated elements, such as GPS data, sound and video. Users move around in the real world as they collect tiny virtual creatures called Pokemon — short for pocket monsters. The mobile app is based on the popular franchise that began with several Nintendo games in the 1990s.

Churches, businesses and other landmarks have been designated as PokeStops, where users collect resources needed to catch Pokemon; and Gyms, where competitions are held among the creatures.

“On Monday night, we couldn’t figure out why all these people were on our property,” pastor Father Thomas Keller told the St. Louis Review, the archdiocesan newspaper. “We noticed people walking up, or in their car slowing down. By Tuesday, we figured out we had all these Pokemon stops. I talked to a nice couple pushing a baby carriage who explained everything to me.” 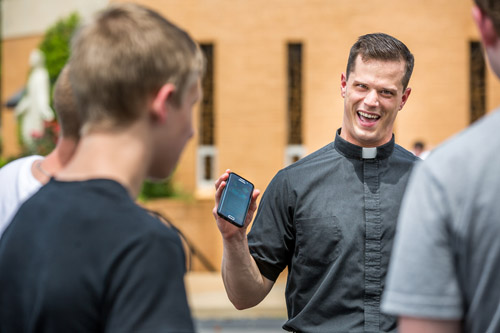 The game especially has been attractive to young adults who grew up on Pokemon in the 1990s. Assumption’s associate pastor Father David Miloscia, 29, was into Pokemon from the eighth grade to his sophomore year in high school. He geeked out with a group of five teenagers who visited the parish July 14 on their quest to catch more characters.

Father Miloscia sees this latest trend in mobile gaming is opportunity to connect with others. “I talked with some kids last night when they were on the parking lot,” he said. “They were happy the church was relating to them in this way,” he told the St. Louis Review, archdiocesan newspaper. The next thing is that personal interaction. For me, I just rely on the Holy Spirit to make an opening or say the right words.”

Frequently, pastors and church employees have no warning that their church has become a Pokemon spot until the players come knocking.

Kevin Flynn, who works at the front desk at St. Charles Borromeo Church in Arlington, Virginia, noticed a large group of young men in their 20s hanging out in the parking lot with their phones in the air.

“My daughter told me later that the chapel was listed as a Gym,” said Flynn.

A Gym is a place where Pokemon players can come and train or do battle with other players. Some players prefer to visit the Gyms in the late evening when fewer people are playing. At least four vehicles were seen at St. Leo Church in Fairfax, Virginia, around 9 p.m. one evening engaged in a battle for the Gym located in the parish’s prayer garden.

Many parishes are trying to figure out how to reach out to visiting gamers, while also standing firm about not trespassing overnight or catching Pokemon in the church. Seminarian John Paul Heisler described a group of players who came into Church of the Nativity in Burke, Virginia, during the 11 a.m. Mass one Sunday in search of a Pokemon. According to Heisler, players were oblivious to the sacredness of what was happening.

“Hopefully, once a person finds the Pokemon, they will enter the church and find Christ,” Father Posey told the Arlington Catholic Herald, diocesan newspaper. “Just to be clear, I do not believe there is anything wrong with playing Pokemon Go. However, I do think people are happy to search for Pokemon and reluctant to search for Christ because he calls us to give more of ourselves.”

What should the church’s response be to Pokemon Go?

According to Julianne Stanz, director of the Department of New Evangelization, in the Diocese of Green Bay, Wisconsin, it should be go — as in “go and make disciples of all nations.”

Stanz and members of her department created a Pokemon Go resource guide for parishes, “A Parish Primer: Responding to Parish Questions and Concerns.”

The four-page guide gives a description of Pokemon Go, a definition of key words, the history of Pokemon and an explanation why parishes should care about the game. The guide is available at www.gbdioc.org/images/Pokevangelization.pdf.

In an email to The Compass, Green Bay’s diocesan newspaper, Stanz said the parish guide was created “in conjunction with a team of parish leaders skilled in evangelization outreach who are looking at using the technology as part of their ministry.”

She added her department had received calls from parishes asking for information about the game.

Stanz said making parishes aware of why people are visiting their church location is the first step in understanding and responding to the Pokemon Go phenomenon.

Brinker is a staff writer at the St. Louis Review, archdiocesan newspaper. Contributing to this story were Ashleigh Buyers in Arlington and Sam Lucero in Green Bay.