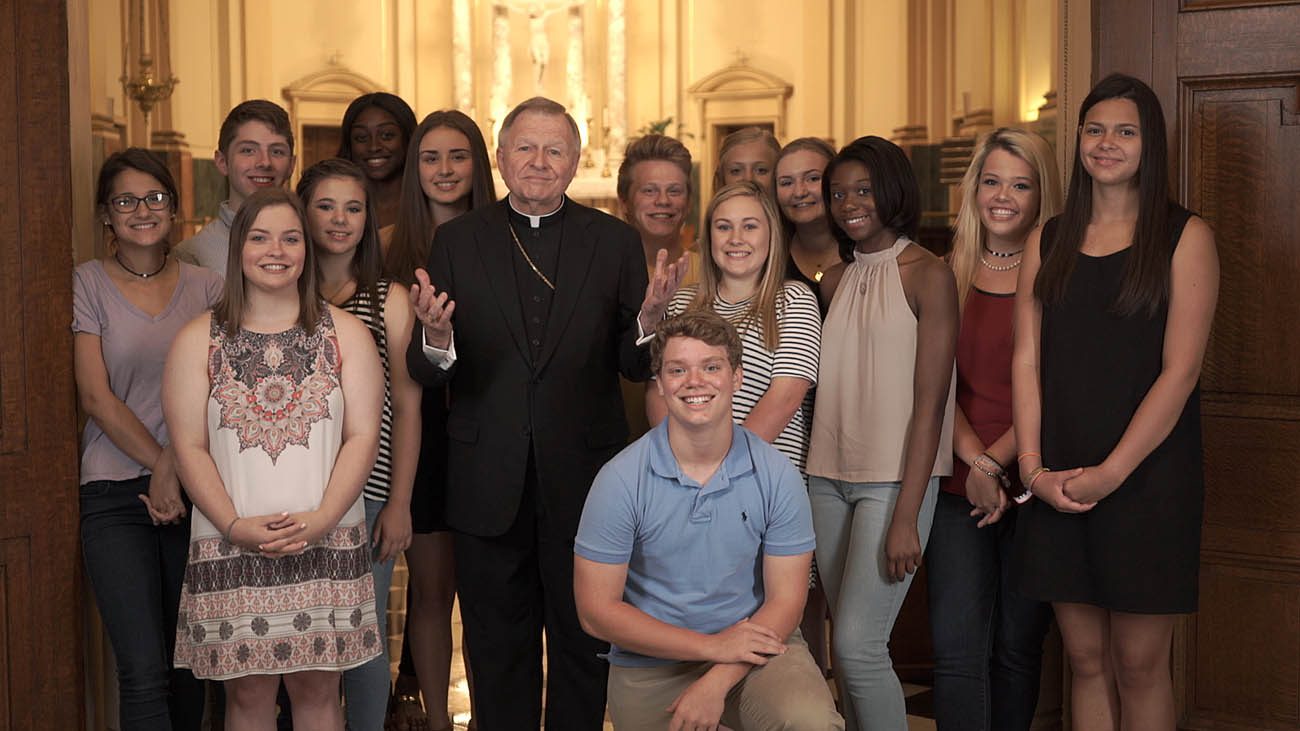 With a nod to evangelization, New Orleans Archbishop Gregory M. Aymond is shown with young adults at the end of a 15-second commercial promoting the "fellowship, purpose and service" of the Catholic Church. The commercial is being shown before every movie playing in the metropolitan New Orleans area for the next 12 months. (CNS photo/courtesy Archdiocese of New Orleans)

NEW ORLEANS (CNS) — They represent a captive audience — the hundreds of people inside a movie theater waiting for the big screen to light up with the film they paid good money to see.

Now the Archdiocese of New Orleans, perhaps in a bow to “Star Trek” and Pope Francis’ evangelizing message of encounter, will boldly go where no diocese has gone before.

As of July 15, the Archdiocese of New Orleans is sponsoring a 15-second, pre-movie commercial that invites people to think positively about the “fellowship, purpose and service” offered by the local Catholic Church.

“This idea actually was born out of the archdiocesan synod’s goals and priorities,” said Sarah McDonald, archdiocesan director of communications. “We’re trying to reach beyond the people we talk to on a regular basis and issue an invitation to those who may not be familiar with the church or who have stopped attending Mass to take another look.”

There are two versions of the commercial — quick hits designed to be inviting and not proselytizing. Each features the code words of fellowship, purpose and service. Each ends with a quick message from New Orleans Archbishop Gregory M. Aymond as he stands with a group of young adults: “All are welcome!” and “Come join us!”

The commercials will run in every major movie theater within the metropolitan New Orleans area for the next 12 months. McDonald said one commercial will be selected to run first, and it will run twice in the rotation before each film showing.

The commercials were a joint effort of the communications and the evangelization offices.

McDonald said she does not know of any other dioceses across the country that have produced pre-movie spots. She said the commercials likely will run before some movies that the church would never endorse, but “it’s our role as evangelizers to get out our positive message and spread the good news and the Gospel of the church before the whole world.”

“If one person is there to see a movie that we would not support morally, but that person’s heart is changed, then that will be an accomplishment,” she told the Clarion Herald, the archdiocesan newspaper.

McDonald said the commercials also are part of an awareness campaign for those either unfamiliar with the church or those who have drifted away.

“Before you can change people’s hearts and minds, you have to build awareness,” she said. “Perhaps they will see the church in a new way. We’re excited. Hopefully people will see themselves in the spot and see that smiling Catholic that Pope Francis is calling us to be.”

NEXT: California Catholic bishops back initiative to abolish death penalty