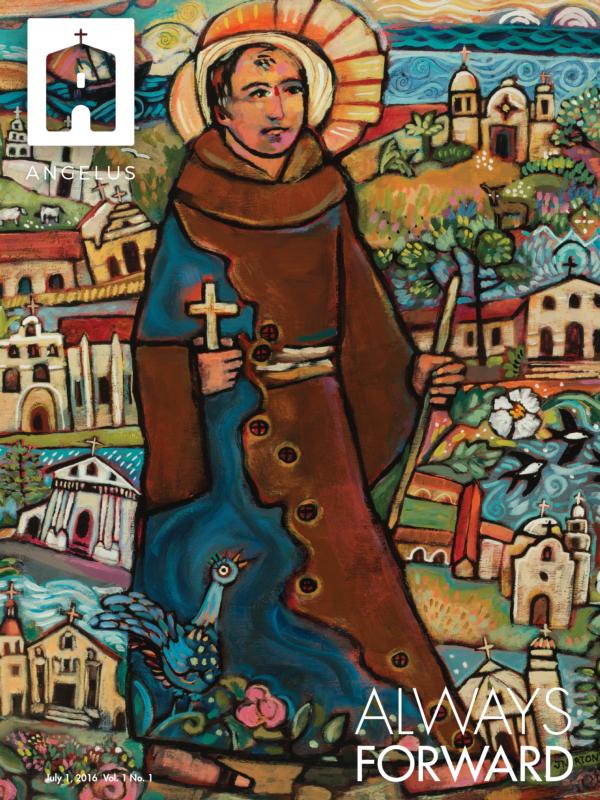 This is the cover of the first issue of the Los Angeles Archdiocese’s new Angelus weekly magazine featuring St. Junipero Serra. (CNS photo/Archdiocese of Los Angeles)

WASHINGTON (CNS) — The new multimedia platform created by the Archdiocese of Los Angeles has as its patron St. Junipero Serra and aims to follow his example as the first to evangelize in California.

St. Junipero, who also was the founder of the state’s missions, was canonized by Pope Francis last September during his U.S. visit, making him the first saint to be canonized on American soil.

Officially launching July 1, the saint’s feast day, Angelus News will focus on bringing Catholic news to as many people as possible through Angelus, a weekly newsmagazine in print; a daily digital edition, AngelusNews.com; social media channels; and a daily digital newsletter called “Always Forward,” which was St. Junipero’s motto.

“Everybody is consuming more news today than they ever have before, but in different ways,” said John David “JD” Long-Garcia, editor-in-chief of Angelus News. “We’re looking for ways … to connect with people on a larger platform.”

“We’d like for the website, newsletter, magazine, social channels (to) be a part of everyday life,” Long-Garcia told Catholic News Service in a telephone interview June 29. “We hope that we can help people enter into a better relationship with God and also with their neighbor.”

Long-Garcia and his team at Angelus News have taken to heart Pope Francis’ call to “get out there and make a mess” and have created a website to host reports on a wide variety of topics of interest to Catholics, international news, and culture and lifestyle pieces.

After the discontinuation of The Tidings newspaper, which served the archdiocese for over a century, David Scott, vice chancellor of archdiocesan communications, collaborated with Archbishop Jose H. Gomez of Los Angeles and Long-Garcia’s team to bring Angelus News to life.

“Following on the footsteps of St. Junipero Serra, a man of heroic virtue and holiness who had only one burning ambition — to bring the good news of Jesus Christ to the peoples of the New World, we now need to send missionaries to proclaim the Gospel in this new digital era,” Archbishop Gomez said in a statement.

Long-Garcia told CNS, “We have not only to report the truth in journalism but to report it in a way that people hear it. Picking the right platforms and being engaged in platforms is important for us to get the message out.”

Angelus News will include more than just Catholic news to keep readers interested.

“They’re forming a habit of staying in communication with us, even if they’re just reading a sports piece,” said Long-Garcia. “When we do have a big piece to share, or something that’s uncomfortable, they’ll give us more of a listen than they would if they hadn’t been cultivating that habit.”

The news platform will cover stories from 287 parishes and 270 schools in the three counties that make up the archdiocese — Ventura, Los Angeles and Santa Barbara. To keep in touch with a growing and increasingly diverse archdiocesan community, Angelus News will cover a range of cultural issues, including international news provided by reporters stationed in the Vatican.

A news release said the new Angelus magazine will be the weekly print “home” for veteran Vatican reporter John Allen and his colleague, Ines San Martin, who writes about the church in Latin America. The two journalists most recently staffed Crux, an online news feed about the Catholic world.

“We are the most culturally diverse archdiocese in the United States and the largest in population,” said Long-Garcia. “We want to reflect diversity in reporting, so we’re covering issues of concern to all communities. … We feel that if we tell the truth about what’s going on in unjust situations … and are able to tell their stories, then we can hopefully be a force for good.”

Long-Garcia and his team hope that the news platform also will appeal to younger Catholics through its weekly magazine, and to the large and ever-growing Hispanic population with Spanish translations of articles and multimedia pieces. Through these changes, Angelus News promises to be a strong part of the church’s evangelization movement.

“We want to be part of people’s lives and in communication with them. I think that’s the first step in evangelization,” said Long-Garcia. “We don’t want to just be preaching to the choir. We have to have ways to invite people in and have conversations.”

Long-Garcia said the process of creating Angelus News has been the product of many people’s hard work, and the result of God’s will.

“This has been the work of a lot of people coming together from all over the place, different countries, (a variety of) expertise, and personalities,” he said. “That’s why I feel like God’s hand is in it.”

PREVIOUS: Iowa priest reinstated; claims of clergy sex abuse against him not proved

NEXT: Author says ‘punitive treatment’ of believers on the rise in society