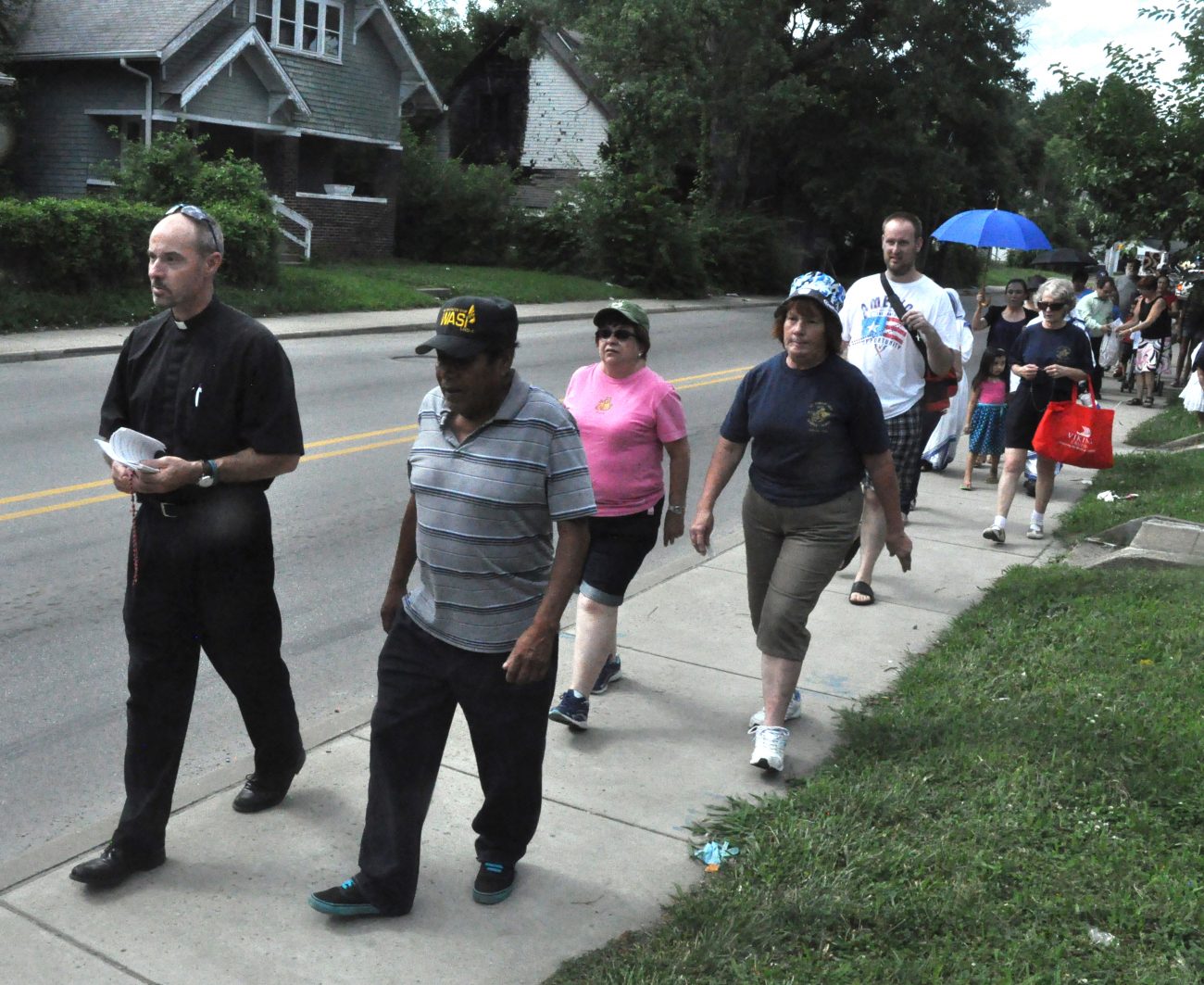 Father Christopher Wadelton, pastor of St. Philip Neri Parish in Indianapolis, leads a group in praying the rosary July 10 while walking through the church's neighborhood. The parish is sponsoring a series of nine consecutive prayer walks in response to increased drug problems and violent crimes in its neighborhood. (CNS photo/Sean Gallagher, The Criterion)

INDIANAPOLIS (CNS) — Violence ripped through the country the first part of July with police shootings in Minnesota and Louisiana and the killing of five police officers in Dallas.

A day after the July 7 shootings in Dallas, violence ripped through the neighborhood surrounding St. Philip Neri Church on the near east side of Indianapolis when two men were found shot dead at an intersection.

On July 10, about 30 people took action to replace the violence around St. Philip with peace by prayerfully walking through the neighborhood, stopping at a makeshift shrine at the location where the two men had been found two days earlier.

It was part of a series of nine prayer walks on Sunday afternoons sponsored by St. Philip Neri Parish that began June 5 and concludes July 31. Participants gather at the church and walk along different routes in the surrounding neighborhood for about a mile, praying the rosary in both Spanish and English.

“Peace has to start in our own hearts,” said Father Christopher Wadelton, St. Philip’s pastor. “It will then grow out from our church to our neighborhood and the whole world.”

Father Wadelton got the idea for the prayer walks from a similar effort made by St. Gabriel Parish in Connersville two years ago after a spate of deaths by heroin overdoses sent shock waves through the small southeastern Indiana town.

The priest explained that the prayer walks sponsored by St. Philip began after similar drug problems and a growth in violent crime in the neighborhood.

He said it was important that the prayer for peace in the neighborhood actually occur on its streets, and not simply in the parish church.

“God’s presence is here in the streets,” Father Wadelton told The Criterion, newspaper of the Archdiocese of Indianapolis. “We’re not just isolated in our church building at Rural and North streets. We’re out in the streets, bringing that visible presence of Christ to the streets.”

Many of the people who joined Father Wadelton on the prayer walk July 10 said something important was missing from the discussions and news coverage of the shootings and increased racial tensions across the country — God.

St. Philip parishioner Mary Kendall said the walk was “a way to show that God should be more important than anything else. There needs to be an awareness of God. Anger is not the answer.”

“It’s important for peace, my life, my neighbors — everybody,” she said. “Prayer is very important. You might not see the effect now. But I put it in Jesus’ hands.”

Michael O’Connor sees the violence in the neighborhood around his parish and the nation and feels like changing it is out of his control. That’s why he turns to God.

“A lot of things in our country are beyond our control. No matter how many training sessions they have for police officers, how many interactive dialogues they have, there’s got to be more change of heart,” O’Connor said. “Prayer can do that. That’s why I come here.”

As the people in the prayer walk moved on from the site where the two men had been found shot dead July 8, they turned onto another street and saw several Indianapolis Metropolitan Police Department officers standing in the parking lots of a gas station and neighborhood grocery store.

Matt Carroll, one of those officers, was glad to see faith-filled people walking on the streets that had been marked by violence.

“It’s inspiring,” said Carroll. “It shows that people care. They’re willing to give to their community and do their part to assist.”

Father Wadelton said that showing care and hope to people in a neighborhood suffering from so much violence and the despair of drugs was a goal in starting the prayer walks.

“Seeing a group of people walking and faithfully praying makes people aware that Christ is in the streets with them,” he said. “There are people who care about what’s going on. It’s a strong act of peace and prayer.”

NEXT: Thousands gather for Mass to celebrate immigrant spirit in America