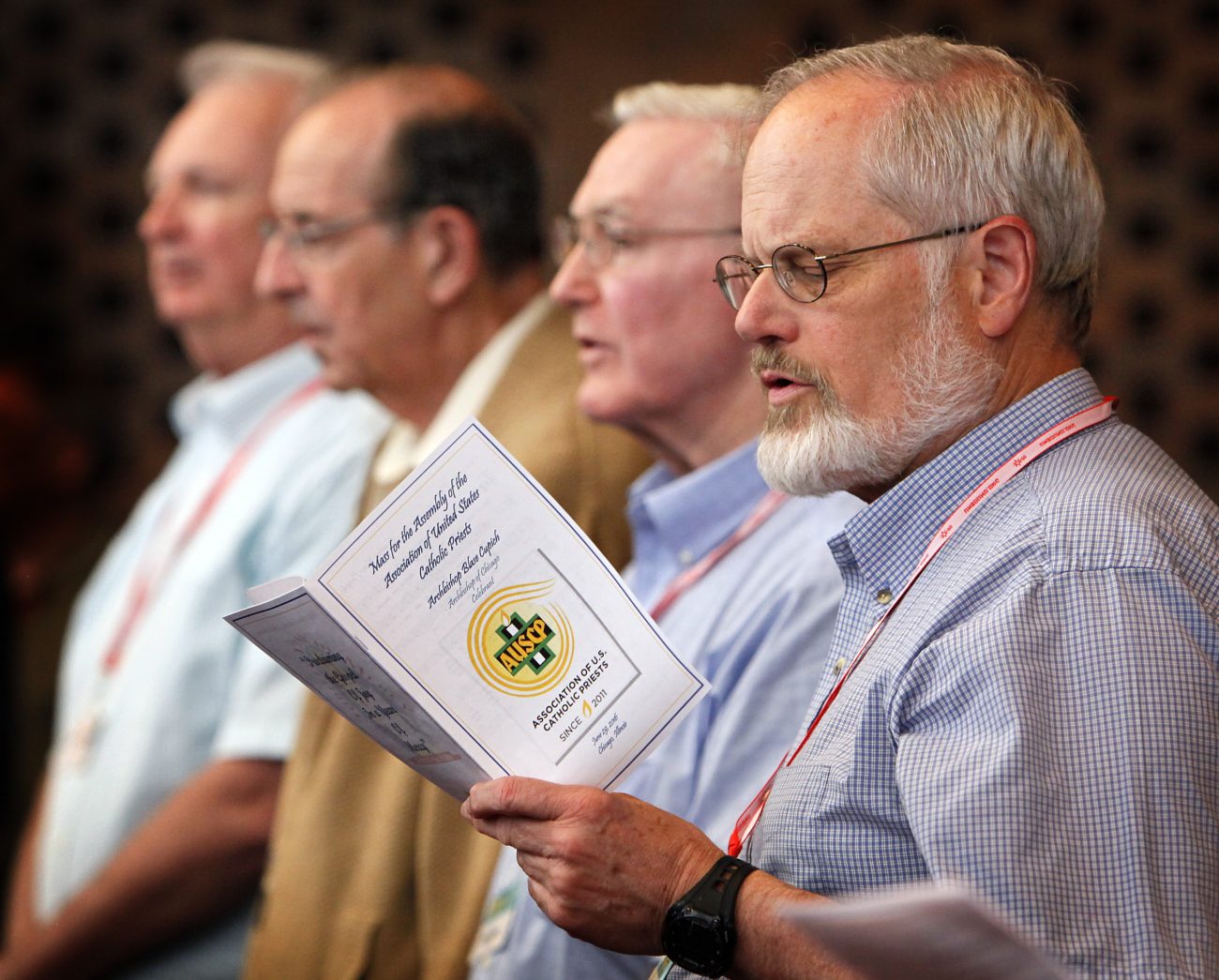 Priests sing during Mass June 30 at the Association of U.S. Priests gathering in Chicago. About 200 members from around the country attend the annual event. (CNS photo/Karen Callaway, Catholic New World)

ROSEMONT, Ill. (CNS) — When about three dozen priests from across the United States gathered at the University of St. Mary of the Lake/Mundelein Seminary five years ago, they wanted to affirm their commitment to the values espoused by the Second Vatican Council and to bring their voices together to encourage the church in the United States to do the same.

This year, about 200 members of the Association of U.S. Priests again gathered in the Archdiocese of Chicago, holding their national conference June 27-30 in Rosemont.

“We’re mostly older priests who were educated and formed by Vatican II,” said Father Bernard “Bob” Bonnot, the association’s president. He was ordained for the Diocese of Youngstown, Ohio, in 1967.

When the group was founded, he said, members felt that some of the council’s openness to the world was being closed off.

“We wanted to stand for it and we wanted to fight for it,” Bonnot told the Catholic New World, newspaper of the Chicago Archdiocese. “We want to move our pilgrim church forward as the Spirit inspires.”

Now, with about 1,000 members, the independent organization is the largest priests’ association of its kind in the United States. Many of the members feel a kinship with Pope Francis and his pastoral approach, Father Bonnot said.

Father Jay Davidson, one of the 27 “founding fathers” honored at the conference, explained it like this: “There’s a tension between those who want black-and-white answers and those who see there are shades of gray. I think I hear Pope Francis saying we are always growing, always on the journey, and we shouldn’t be condemned because we’re here and not there. We should be encouraged to keep growing.”

Father Bernie Survil, a priest of the Diocese of Greensburg, Pennsylvania, said he encouraged the establishment of the group after ministering for 25 years in Central America and encountering independent priests’ groups there. When he surveyed priests to find out what they thought the focus should be, “the majority said to preserve the values of Vatican II.”

Another of the founders, Father Thomas Lumpkin of Detroit, said the work of the association has been more successful in some ways than others. Its members have found support and encouragement for their own ministry, he said.

“That’s been effective,” he said. “But we don’t have enough of a persuasive voice in the wider church.”

This year the group heard speakers on topics ranging from “Laudato Si'” and the way Vatican II has unfolded under Pope Francis to migration theology. They also participated in internal discussions about topics including ministry to the lesbian, gay, bisexual and transgender community; dealing with the priest shortage; and clericalism.

Members also voted on a variety of resolutions, including one backing Chicago Archbishop Blase J. Cupich’s call to make gun violence a priority for the church and others calling for the end of the death penalty, supporting an increase of the minimum wage to $15 per hour and petitioning for a change in canon law to permit lay men and women to preach at Mass. Archbishop Cupich celebrated Mass for the group June 29.

Massimo Faggioli, a professor in the theology and religious studies department at Villanova University, told the attendees that Pope Francis is working from Vatican II documents, especially the Pastoral Constitution on the Church in the Modern World (“Gaudium et Spes”), in his recent apostolic exhortation “Amoris Laetitia” (“The Joy of Love”), which called for supporting families and meeting them where they are in their journeys.

In doing so, Pope Francis essentially is taking Vatican II for granted, something that has not yet happened in the U.S. church, Faggioli argued, despite the fact that the church itself has embraced the changes made by the council.

Rather, the social and cultural response to Vatican II has reflected the competitive nature of church politics in the U.S., a competition that echoes the American two-party system, he continued. But even those who might see themselves as being in opposition to Vatican II –- including some of those championing religious freedom –- are, in fact, embracing the values of the council, he added.

“The U.S. church has been a Vatican II church for the past 50 years,” Faggioli said.

NEXT: Veterans say helping bury the dead with dignity ‘a way of giving back’