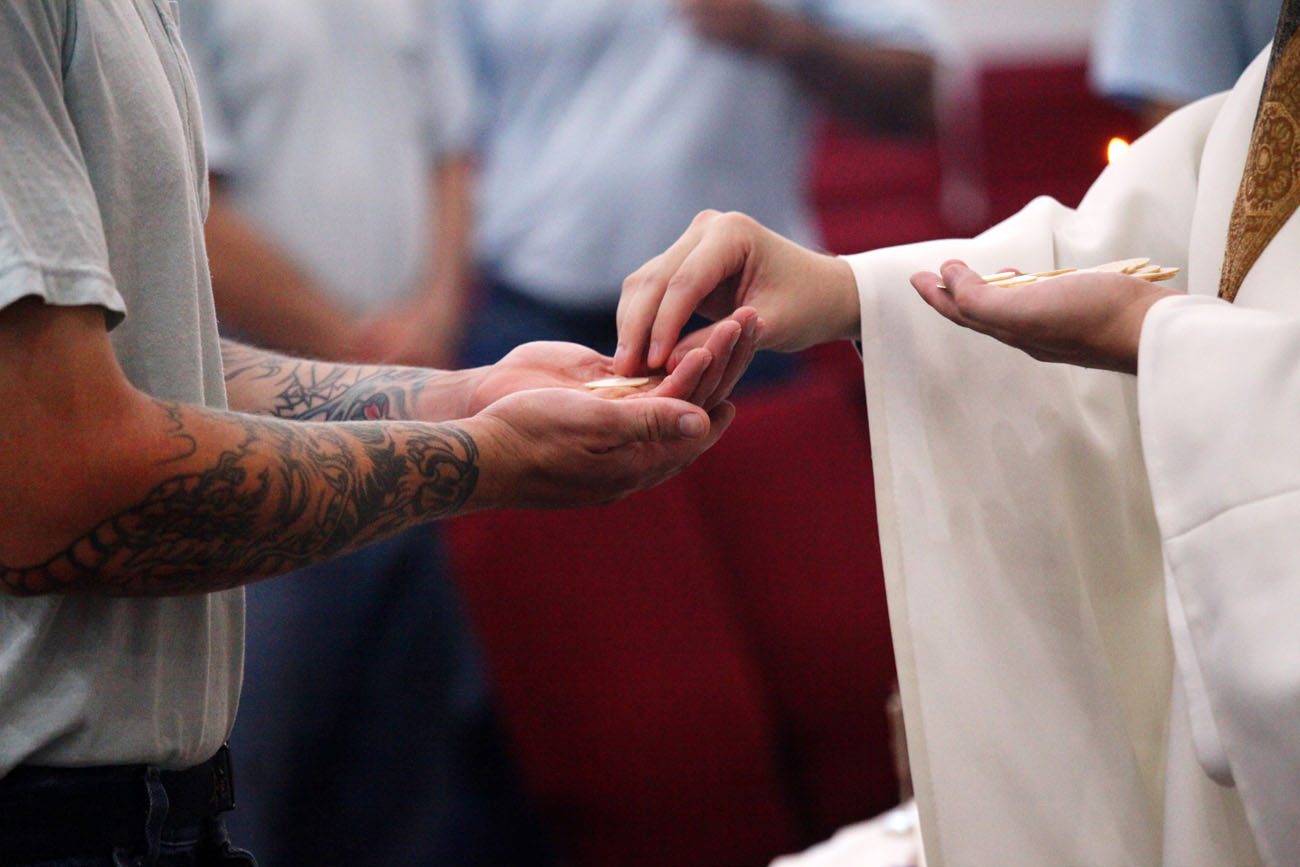 Father Joshua Werth distributes Communion to an inmate during a June 9 Mass at the Ellsworth Correctional Facility in Kansas. (CNS photo/Karen Bonar, The Register)

ELLSWORTH, Kan. (CNS) — Behind a fence trimmed with razor wire sits the white steeple of the Spiritual Life Center in the Ellsworth Correctional Facility.

Across the empty yard, three small figures walk toward the only circular building amid a sea of sharp edges.

Volunteer Chuck Huslig trails behind the black-clad figures of Bishop Edward J. Weisenburger of Salina and Father Joshua Werth on the way into the worship space.

“I think there’s a tremendous need for these men to have more of a spiritual life,” said Huslig, who has been a Catholic volunteer at the facility since 2003.

“They’re at a place where they may be drawn to our worship service because it’s someplace different to go or because they’re bored,” he told The Register, newspaper of the Salina Diocese. “They often have other reasons to start coming, but some of them are going to really develop a much deeper spirituality.”

Huslig’s ministry began when he worked a rotating shift at a nearby refinery. He was one of three lay ministers who would visit the correctional facility.

He said the current Year of Mercy gives him the opportunity to reflect on the corporal works of mercy, especially “visiting the imprisoned.” He credits eight years of parochial school under the Dominican sisters in Great Bend with instilling those values.

“(The Dominicans) taught us a lot more than our school subjects,” Huslig said. “They taught us about social responsibility, especially the corporal and spiritual works of mercy. Those nuns lived that.”

When Huslig started volunteering, Masses took place only once a month. Huslig and the other retired volunteers hosted a weekly Communion service.

After a while, the frequency of Mass increased to the first and third Wednesday. He held a Communion service on the other Wednesdays so the inmates could receive Communion weekly. 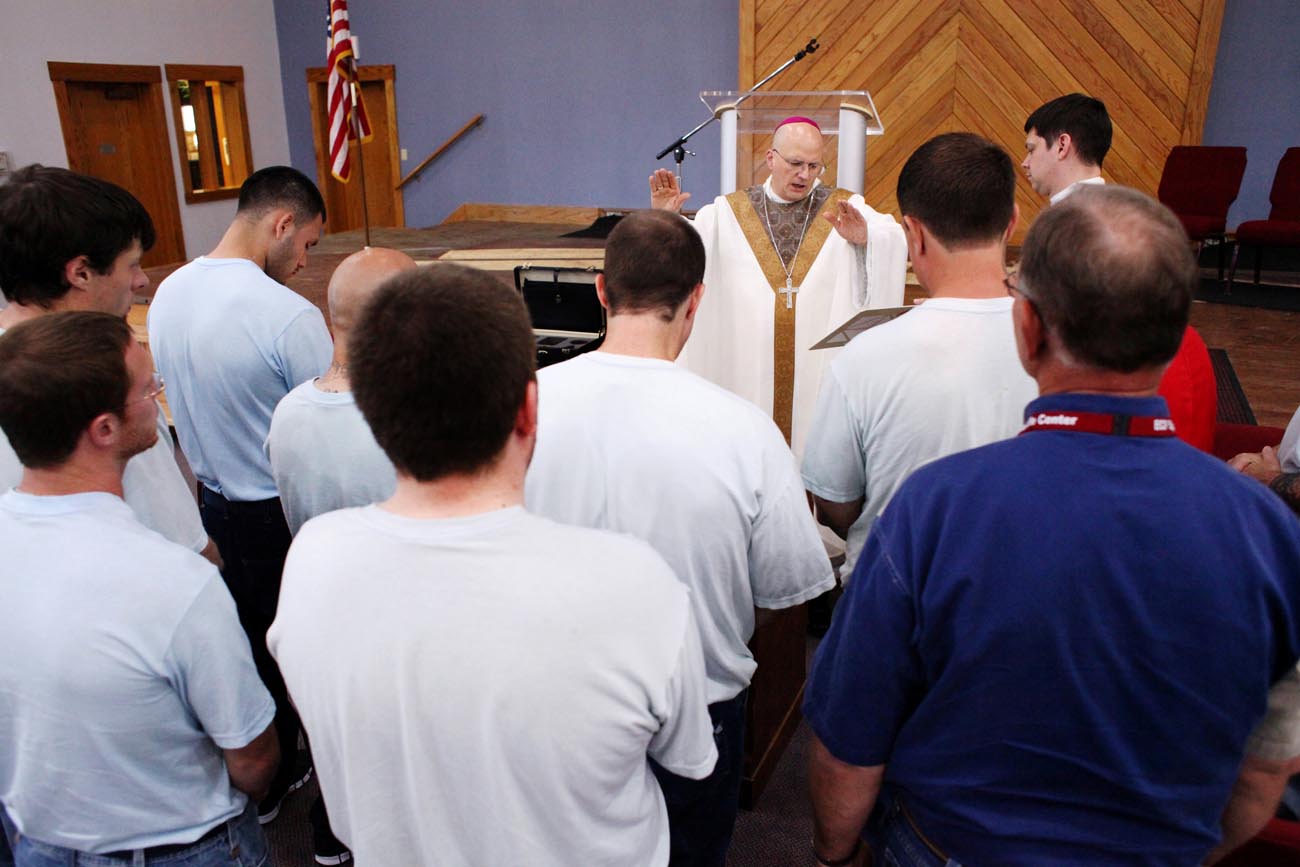 Dale Bailey, the chaplain at Ellsworth Correctional Facility, said before a priest came regularly, a few guys would attend the Catholic service.

“When Father Chacko started coming, we’d have 25 to 30 guys attend,” Bailey said. “The attendance shows how important having a priest present is.”

With Father Chacko administering the sacraments, it allowed Huslig to provide other forms of spiritual enrichment.

“I took it as an opportunity,” he said. “I saw a need for someone to do some Catholic education.”

In November 2014, Rite of Christian Initiation of Adults classes began in the Spiritual Life Center.

“This was a jump into the deep end of the pool for me,” Huslig said. “I honestly had no qualifications.

“I wanted them to know what it is they’re supposed to be believing if they call themselves Catholic.”

He consulted with Father Steven Heina, pastor of St. Bernard Church in Ellsworth, and obtained permission to use the materials from the parish’s confirmation class. The series includes 24 video lessons with discussion and supplemental reading.

“In a parish it takes the better part of a year with high school kids,” Huslig said. “We don’t have that kind of time because the Department of Corrections transfers people around.”

The class in the prison runs eight weeks.

“My first incentive was to catechize the fellas that were already baptized, but it didn’t take very long and I saw the fruits of fellows who had no Christian background whatsoever … the Catholic worship group spread the word,” Huslig said.

There is no obligation to join after the classes, but he said many opt to become Catholic.

On June 9, five men joined the church when they were baptized and confirmed. Two others were confirmed.

In the 19 months since Huslig began RCIA classes, 11 have received both baptism and confirmation; and 17 were already baptized, so they received confirmation.

“Without a doubt this is a Holy Spirit-inspired mission,” Bishop Weisenburger told The Register. “Pope Francis calls us to go out to people, engage them where we find them, and accompany them on the way to the Gospel. Chuck’s ministry, accompanying these inmates on their journey, makes this wonderful call to discipleship visible.”

The bishop visits the correctional facility a few times a year. He says Mass, which includes baptism and confirmation for the inmates who have completed the RCIA program.

“It’s a very big deal,” Bailey, who is Baptist, said of the bishop’s presence. “It’s great to have him come in. (The inmates) understand the value of having the bishop come and say Mass.

“Part of being incarcerated in their minds is being rejected by society. When you have a priest come every week and a bishop come every few months, it’s a lot of self-esteem to their lives.”

“It is humbling how these men open up once they trust someone,” he said. “I wish I could get there more often but knowing Chuck is there, teaching the faith, and the local pastor is celebrating Mass weekly, reminds me how Christ is found wonderfully whenever two or more are gathered in His name.”

The Spiritual Life Center at Ellsworth was built in 2004 to serve as a spiritual home base for inmates.

With more than 9,000 square feet, six classrooms, a library and a sanctuary, the building serves 12 religions.

While the building is in a state detention facility, the project was made possible through the efforts of volunteer time and donations. Money came via individual and corporate donations, as well as grants from private foundations. Inmates provided labor during the building process.

Bailey said plans are under way to expand the current building to include rooms for GED classes, as well as a reintegration program by the Salvation Army. Fundraising is underway for the addition.

Even though he spent many years working in a refinery, Huslig’s college degree was in social work and he worked in that field for a number of years.

While Huslig meets the men during their incarceration, his focus is on their life after the correctional facility.

“Ninety-seven percent of these people will be released at some point,” he said. “The Department of Corrections is making lots of efforts to help these people make changes in their lives so that they will be successful in reintegrating back to society.”

“Chuck’s extended presence in the prison has earned him a level of trust and credibility that few of us can equal,” the bishop said. “The inmates know when someone truly wants to be there — not sent or assigned — but there because they want to be. The guys open up to him and it draws them into the faith he lives with joy.”

Huslig is unassuming about his role in the correctional facility.