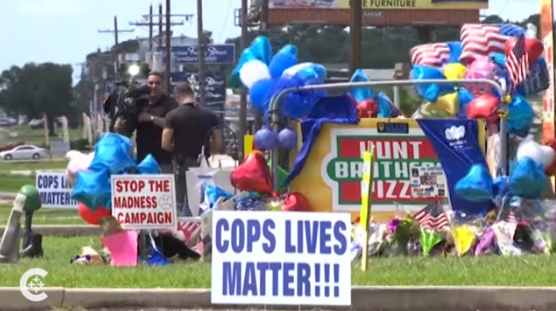 As a former deputy with the East Baton Rouge sheriff’s office, Marino, a parishioner at St. Jude the Apostle Church in Baton Rouge, said she was shocked to learn that one of the three officers shot and killed during a morning assault on law enforcement was a friend and someone she used to work with.(See a related video.)

“Brad (Garafola) was just a great guy,” she said.

Described by his wife, Tonja, on Facebook as a “wonderful husband, father and friend,” Deputy Brad Garafola, 45, along with city police officers Matthew Gerald, 41, and Montrell Jackson, 32, were shot and killed by a lone gunman. Three other law enforcement officers also were wounded, and one, 41-year-old Nicholas Tullier, remained in critical condition late July 21.

The assailant, who investigators said targeted police officers, was identified as Gavin Eugene Long of Kansas City, Missouri. Long was shot and died at the scene. In YouTube videos posted before the assault, Long expressed his anger with the death of Alton Sterling in a confrontation with police July 5.

“It was really hard (to hear the news about Garafola),” Marino told The Catholic Commentator, newspaper of the Diocese of Baton Rouge.

“As an ex-police officer, you can put yourself in that position. You know what they are going through,” she said, noting from her own experience as a deputy of six years, that every call is different, and while you hope everything will be OK, “you just don’t know.”

“They had my back and I had theirs. When they (police officers) say they are family, they truly are family,” she said, adding, “I pray that they are all safe.”

Betty Wright, religious education assistant at St. Jean Vianney Church, said she also was praying for the safety of our city’s law enforcement officers. As the mother of a city police officer, Wright recalled how anxious she was when she first heard the news of the police assault, which occurred when she was at Mass.

“We were in church … and I could feel my phone vibrating,” she said.

At first her daughter called, then family and friends. Wright finally sent a text to her brother to find out what was going on — he shared the tragic news of the police assault.

Wright knew her son was not expected to be at work that morning, but she also knew she had to make sure.

“He got off of work that morning, and had just gone to sleep. He was just coming off eight straight nights,” she said, noting, however, that her son, with only one hour of sleep behind him, got up to go back to work to help.

“He just couldn’t abandon them. I understand,” said Wright, explaining that in her son’s police family, they “lost their brothers.”

Wright added that her son, who also is a husband and a father of four, first became interested in police work after he volunteered to help New Orleans police officers following Hurricane Katrina. Chris, an Army veteran, had just returned from Iraq.

As a mom, Wright continues to rely on her faith to support her and her family in difficult times. She noted that her family is also close, which helps.

“It’s tough, but we all stick together,” she said.

Parishioners at St. Isidore Church in Baker have been coming together in an outpouring of love and support to the family of slain officer Gerald.

Father Frank Bass, who has been spending time with the family since Gerald’s death, said church members have been at the home of his parents, Ronnie and Tish Gerald, answering the phone, cooking and “taking care of the family.” He noted that this is an example of St. Isidore coming together as a faith family to celebrate good times and console in times of tragedy.

He also was an active member of the youth softball team and played in the diocesan softball tournament, according to Father Jerry Martin, who was pastor at St. Isidore in the late 1980s.

“He had an uplifting personality. He brought energy and enthusiasm to the group. That was his gift,” said Father Martin, who is now pastor at St. John the Evangelist Church in Prairieville.

Gerald served as a crew chief on a helicopter crew during multiple U.S. Army tours in Iraq. He was a husband, father, brother and patriot.

“It’s tragic to me that he was in the military and in Iraq in so many life threatening situations and then he came home and was killed,” said Father Bass.

According to Deacon Alfred Adams, director of the Office of Black Catholics for the Diocese of Baton Rouge, the only way to overcome the divisiveness that led to the tragic police shootings in Baton Rouge is to see and treat others as brothers and sisters in Christ.

“We are all made in the image of God and we need to see and treat each other as brothers and sisters in Christ,” said Deacon Adams, who shared his reflections with a meeting of the Knights of Peter Claver at St. John the Baptist Church in Edgar the night of the police killings.

“We hear about people saying ‘black lives matter’ or ‘white lives matter.” We need to get caught up in the concept that all lives matter,” said the deacon.

He said he would like to get the people of the community together to “talk about things.”

“We need to get it out,” said Deacon Adams, because dialogue helps people get to know each other and better understand “why they do the things that they do.”

And that includes dialogue between law enforcement and the community. “We need them, but they need us too,” he said.

The Baton Rouge shootings are indicative of a “worldwide problem” of people stepping away from God and not following his commandments. And it will take supernatural healing, which happens through prayer. But prayer is nothing if not backed with action, stressed the deacon.

In this Jubliee Year of Mercy, he said, that includes praying for God’s mercy and treating others with mercy.

Shelley is assistant editor and Smith is a staff writer at The Catholic Commentator, newspaper of the Diocese of Baton Rouge.