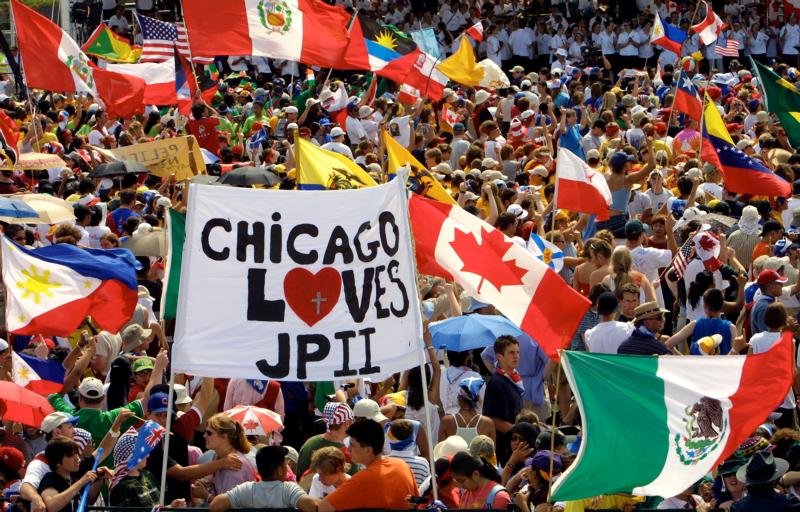 A large crowd, including Chicago youths and other World Youth Day pilgrims, gather to welcome St. John Paul II to Toronto in 2002. The largest U.S. group to attend a World Youth Day outside of North America, 30,000 American pilgrims plan to attend the July 26-31 festival in Krakow, Poland. They will join 2.5 million pilgrims from around the world. (CNS photo/Nancy Wiechec)

The largest U.S. group to attend a World Youth Day outside of North America, 30,000 American pilgrims plan to attend the July 26-31 festival in Krakow, Poland. They will join 2.5 million pilgrims from around the world.

Bishop Frank J. Caggiano of Bridgeport, Connecticut, the U.S. bishops’ episcopal liaison for World Youth Day, said in a July 7 news conference that, despite security concerns in the European Union, “There is no evidence of any credible threat being made.”

Paul Jarzembowski, World Youth Day USA national coordinator, said his office has been working with the Polish Embassy in Washington, along with the U.S. and Polish governments, to ensure pilgrims’ safety.

At the news conference, he encouraged participants to read the State Department’s World Youth Day webpage and to sign up for the Smart Traveler Enrollment Program, which provides travel alerts and warnings for Americans abroad.

The World Youth Day team also encouraged pilgrims to finish registering if they had not already. In addition to the 30,000 fully registered participants, another 10,000 have yet to complete registration and pay.

Bishop Caggiano reminded participants to tell their banks that they’re traveling, take enough of their medications, rest well before departing and stay hydrated in Poland.

Spiritually, he said, pilgrims can prepare their hearts by praying regularly and docilely, asking for the Holy Spirit’s guidance and being open to the gifts of the Holy Spirit.

“No one is excluded from the pilgrimage,” Bishop Caggiano said.

Those staying home can follow along on social media or through the World Youth Day app, which has not yet been released.

Matt Palmer, social media specialist at the U.S. Conference of Catholic Bishops’ Office of Public Affairs, also announced that a 360-degree video would be used to record several of the World Youth Day events.

Jarzembowski encouraged pilgrims staying home to “carve out time” to follow along on the app or to attend World Youth Day gatherings across the U.S., including in Washington, Connecticut and Detroit.

PREVIOUS: ‘Together 2016’ aims to draw 1 million people of faith to National Mall