Father Edward Cahill, known as a dynamic preacher, dies at 82 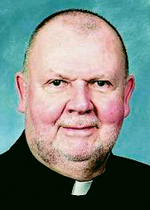 Born in Philadelphia, the son of the late John F. Cahill and the late Mary (King) Cahill, he attended St. John the Baptist School in Manayunk before entering St. Charles Borromeo Seminary.

He was ordained May 14, 1960 by Bishop J. Carroll McCormick at the Cathedral of SS. Peter and Paul, and his first assignment was as parochial vicar at Annunciation Parish, Shenandoah. He then entered the education apostolate, serving the faculty of Roman Catholic High School and Bishop McDevitt High School.

Father John Babowitch, who grew up in Visitation Parish, was encouraged in his vocation by Father Cahill, and remained a good friend ever since. “He was loved by the people in every parish he was in,” Father Babowitch said. “He was kind to seminarians and a holy man who cared for his people.”

In 1989 Father Cahill was named pastor of Holy Cross, where he served until he was named pastor emeritus in 2004. Following that, for the next four years he was chaplain at St. Mary’s Manor, Lansdale.

Deacon Bob Frankenberger, a permanent deacon at Holy Cross, especially remembers Father Cahill’s preaching skills. “He was a marvelous, dynamic preacher and he never used notes,” he said. “Everything was spontaneous.

“He also was a member the Charismatic movement, and a lot of people relied upon him for his prayers, for his praying over them.”

Dale Lauletta, another Holy Cross parishioner, also remembers Father Cahill as an excellent preacher even at the daily 6:30 a.m. Mass when his two-minute homily gave people something to think about for the day.

“He looked like a marine sergeant, but had a heart of gold,” she said. “He was very spiritual, his prayers were powerful and people said he had healing hands.”

Bishop Michael Fitzgerald, who was in residence at Immaculate Conception while Father Cahill was pastor, said he was one of the few priests of his seminary class who remained priests for the Philadelphia Archdiocese. Most of his classmates were in parishes that are now the Allentown Diocese at the time of the 1960 split and became priests of the new diocese, but Father Cahill was in school ministry in Philadelphia and remained in the archdiocese.

“He was a blessing to live with,” Bishop Fitzgerald said. “He had a deep knowledge of the faith and a wisdom and prayerfulness about him. He had a diverse priestly experience and a great sense of humor. We have been friends ever since.”

There will be a viewing for Father Cahill at 9 a.m. on Friday, July 22 at St. Francis Center for Rehabilitation and Healthcare, Darby, followed by his 11 a.m. funeral Mass with Bishop Michael J. Fitzgerald as the principal celebrant and homilist. Concelebrants will include Father Babowitch and Msgr. William A. Dombrow.

Father Cahill is survived by nieces, a nephew and great nieces and nephews. Interment will be at Calvary Cemetery, Conshohocken.

NEXT: Father Francis Piro, correspondent for Vatican newspaper, dies at 84