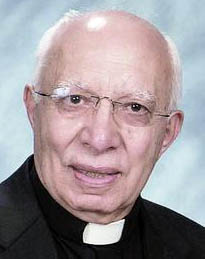 Father Francis Piro, a resident at St. Philip Neri Parish in Philadelphia, who ministered in several archdiocesan parishes and was a correspondent of L’Osservatore Romano for a number of years, died July 28 at age 84.

Born in Acri (Cosenza), Italy, the son of the late Vincenzo Piro and the late Rose Marie Giuseppa Piro, he attended elementary and secondary schools in Acri before entering Pio XI Seminary in Reggio, Calabria, where he earned a licentiate in theology.

“He was very jovial, very warm, it was the Calabrian in him. Within five minutes of meeting him, he would be your friend.”  — Father John Harkins, friend of Father Francis Piro

His chief work was what he did for the newspaper, explained Father James Oliver, pastor of St. Philip. Father Piro would receive newspapers from dioceses around the United States and transcribe items of interest into Italian to send to L’Osservatore Romano.

“He was a prayerful person, you would always seeing him praying his rosary,” Father Oliver said. “He was a lively, active person and he loved politics, and he consoled people in many ways.”

Father John Harkins first came to know Father Piro when both were living at St. John the Evangelist Parish in center city Philadelphia, and later, when Father Harkins was pastor, at St. Michael’s, although Father Piro would have to go to Rome two or three times a year because of his newspaper work.

“He was very jovial, very warm, it was the Calabrian in him,” Father Harkins said. “Within five minutes of meeting him, he would be your friend.”

A man of many interests, he also helped found an adult vocational training school in Central America, Father Harkins recalled.

“He was very good with the people, he loved to play the piano and I was very happy to have him at the parish,” Father Harkins said.

A viewing for Father Piro will be held at St. Philip Neri Church on Wednesday, Aug. 3 at 9 a.m. This will be followed by his 11 a.m. funeral Mass celebrated by Archbishop Charles Chaput. Concelebrants will include Msgr. Daniel Sullivan, Fathers Edward Kuczynski and Wilfred Maloney, and Father Oliver, who will be the homilist.