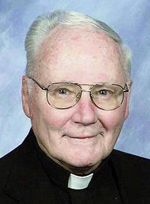 His best friend at the seminary from their entrance in 1942 was Francis Dreger, now Msgr. Francis Dreger. “We sat next to each other in class, we were in the same dorm, we had the same interests,” Msgr. Dreger recalls. “When we were ordained we both went upstate and we always got together. He loved his ministry and was understanding and forgiving, a pretty remarkable guy.”

He was appointed pastor of Holy Saviour in 1980 and pastor of St. Anne in 1985, serving there until he was named pastor emeritus in 1998. In retirement he was in residence at St. Matthew Parish in Philadelphia.

“He was made to be a priest,” said St. Anne’s parishioner Dennis Corkery. “He was quiet and gentle, not intrusive, someone you could be yourself with. He was faithful to his duties, enjoyed being of service.

He was well liked, but not a pushover. He knew how to use his authority but didn’t abuse it.

“He retired from the parish but didn’t retire from life. He was fully engaged with the people up until the very end of his life, keeping up with the families and all of their children.”

He always remembered St. Anne’s and returned annually for the novena honoring the parish patron saint, according to Bill Stahl, another parishioner. “He was the one who revived the novena to what it has been,” he said. “He was an excellent priest, very easy to talk to. His homilies were good but short, especially during football season. He would get you home in time for the game and would joke about it. I never knew anyone say anything nasty about him.”

After his retirement he was welcomed at St. Matthew’s where he made a real contribution. It would be his home for 18 years, longer than any assignment.

“People were drawn to him no matter where,” said Msgr. Charles McGroarty, who was the pastor of St. Matthew for most of those years. “He had a dog; some places wouldn’t have taken him with a dog. It was a big dog and as gentle as he was. He loved sports, all kinds of sports and he would even then row on the Schuylkill.”

But mostly Msgr. Kelley “loved the opportunity to engage with people. He was just a good guy and very holy,” Msgr. McGroarty said.

There will be a viewing for Msgr Kelley on Monday, July 11 at 4 p.m. at St. Matthew Church, followed by a 7 p.m. parish Mass. There will be a Tuesday, July 12 viewing at St. Anne Church at 9 a.m. followed by his 11 a.m. funeral Mass celebrated by Bishop Michael J. Fitzgerald, with Father James Novakowski of the Diocese of Grand Island, Nebraska as the homilist. Father Novakowski was mentored by Msgr. Kelley while in his youth at St. Anne’s.

Msgr. Kelley is survived by his nephew, Donald Kelley.

PREVIOUS: Foundress of order of women religious dies at Mass honoring her vocation

NEXT: Father Edward Cahill, known as a dynamic preacher, dies at 82