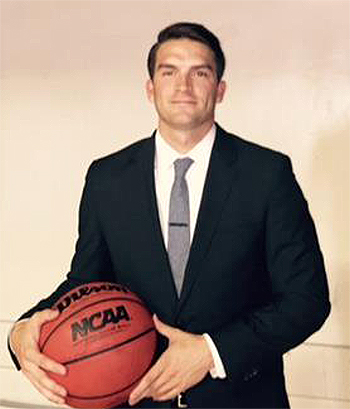 Entering the room for what he thought was a third interview, Matt Griffin wasn’t sure what questions awaited him.

The third interview was not what it appeared.

The brass of Roman Catholic High School, one of the most successful basketball programs in the country, informed him that he was being offered the head coaching position of its basketball team.

Needless to say, he accepted.

“It’s hard to describe,” said Griffin, a 2007 St. Joseph’s Prep alum, former first-team All-Catholic, and, for the past two years, varsity assistant coach. “It was a special moment. It was a feeling of excitement, and of gratitude for the opportunity.”

To say that basketball is a major component of Griffin’s DNA is putting it mildly. His father, John, was a Roman Catholic standout before graduating in 1974. He later played for St. Joseph’s University and eventually coached its men’s team from 1990 to 1995. Griffin’s brother John starred at the Prep. He then played at Bucknell University, where he is currently an assistant coach.

Throughout his life, Griffin has understood the special kinship among Roman Catholic alumni.

“Being around friends and former teammates of my father, I recognized Roman’s unique program,” he said. “The tradition and history can’t be found anywhere else. I learned from a very young age what it was like to play for the purple and gold.”

Griffin, a former team captain at Boston University, inherits a program that has captured the past two Catholic League and PIAA Class AAAA championships. Four starters graduated and will play at Division I schools.

While the roster still includes young potential, Griffin will face an arguably daunting challenge in a league that includes perennial winner Neumann-Goretti and a handful of teams that scratch and claw no matter what their record.

“Teaching and coaching is my passion,” said Griffin. “I love working with young people, and this being basketball is icing on the cake. It’s part of my calling. So when I look at our situation, I’m excited. We have a lot of talented players. It’s about getting better each day and being where we need to be at the end of each season.”

Griffin is only the fifth Roman Catholic basketball coach since the 1968-69 season. The most recent coach, Chris McNesby, stepped down at the end of last season to spend more time with his young family.

McNesby had kind words about his successor.

“Matt is an up-and-coming young coach with great energy and passion for the game,” said McNesby, a 1995 RC graduate. “I enjoyed watching him as a player in the Catholic League. I know he will do a great job and I’ll be happy to help him any way I can in his transition.”

PREVIOUS: Even in a loss, team learns best lessons of baseball, and life