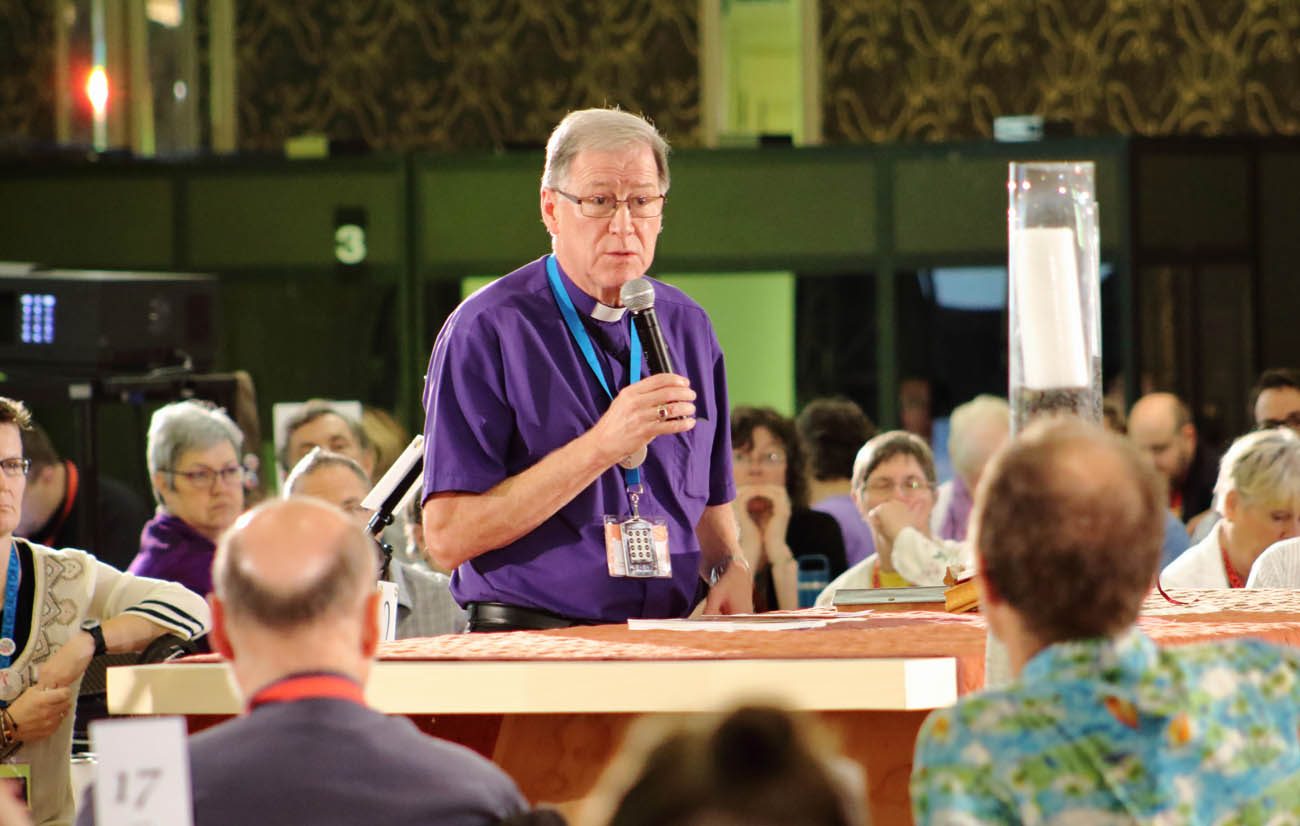 Archbishop Fred Hiltz, primate of the Anglican Church of Canada, warns against bullying in Toronto before the vote on same-sex marriage July 11. (CNS photo/Francois Gloutnay, Presence)

TORONTO (CNS) — In a turn of events, the Anglican Church of Canada said yes to a same-sex marriage proposal after a voting error was discovered.

The announcement made July 12 came less than 24 hours after it was thought participants in the church’s General Synod rejected the motion.

The Anglican Church of Canada now has three years to think about the implications of this vote, as the proposition will need to pass a second reading at the next General Synod in Vancouver, British Columbia, in 2019.

Anglicans in Canada had talked about the possibility of moving toward gay marriages instead of staying with a regime in which civil same-sex unions had the possibility to be blessed by an Anglican priest, but were in no way considered to be a sacred union. In the church’s 2013 General Synod, the delegates asked that a commission on the marriage canon develop a motion in favor of same-sex marriages for this July.

In order to pass, the motion needed the approval of two-thirds of all three chambers: the bishops, clergy and laity. When the results came out late July 11, the floor of the General Synod was quiet as the 234 delegates realized that the motion failed to pass by only one vote from a member of the clergy.

The Rev. Michael Thompson, synod general secretary, announced July 12: “We discovered that the electronic voting system we were using miscoded my electronic file. I was listed, and my vote was counted, as a layperson instead of a priest. This one vote changed the outcome of resolution A051-R2, the resolution to amend the marriage canon.”

The debate on same-sex unions for the Anglicans in Canada has been bitter at times. On July 11, knowing the pre-vote discussions would be emotional, the church’s primate, Archbishop Fred J. Hiltz, warned against bullying on both sides.

“This kind of behavior is not appropriate. It’s unacceptable,” he said. “We are all the body of Christ.”

Contributing to this story was Philippe Vaillancourt. He and Gloutnay are on the staff of Montreal-based Presence info.

NEXT: Pope brings Latin American vision to universal mission of the church