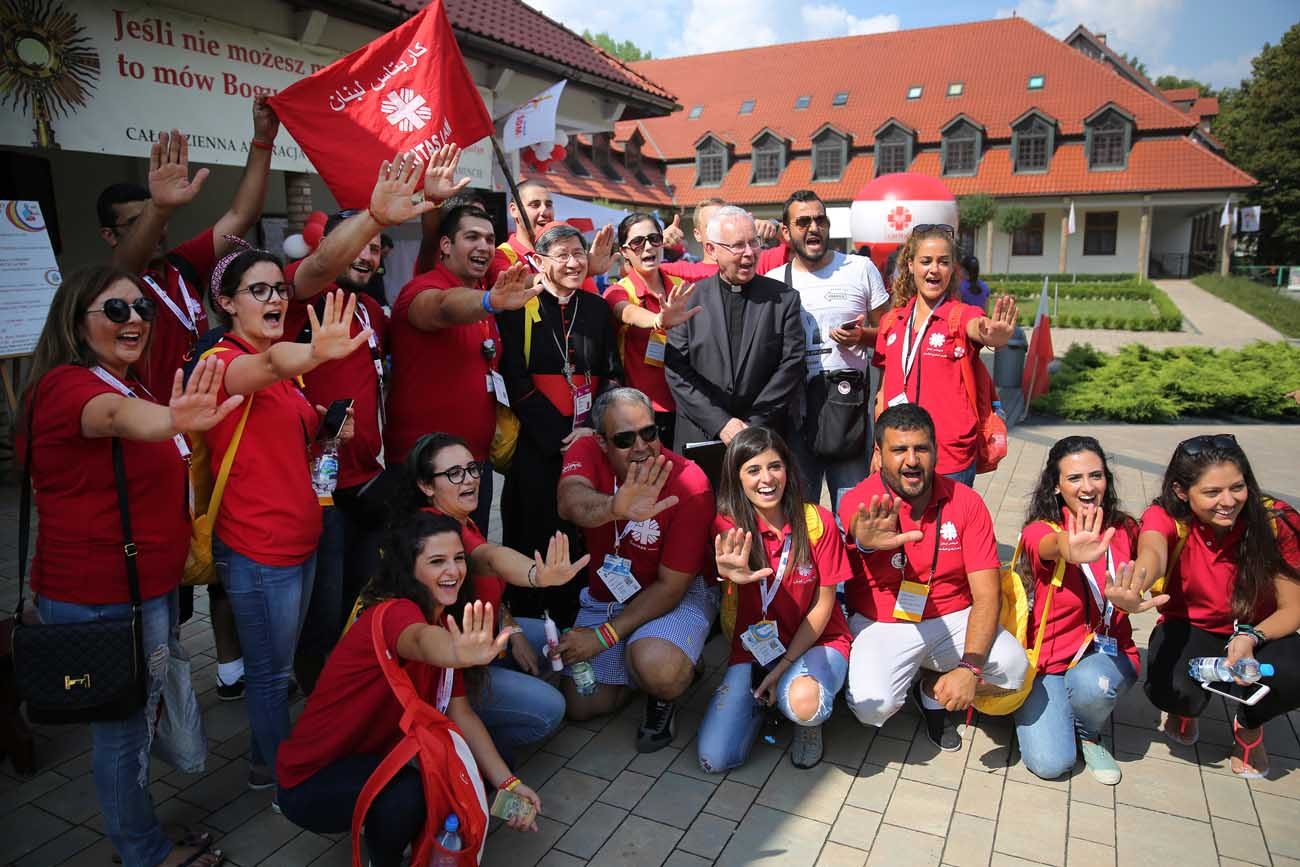 KRAKOW, Poland (CNS) — Young people can show the world love through actions of caring and service to others in a world where even priests are not safe while celebrating Mass, said the president of Caritas Internationalis.

“We need love,” Cardinal Luis Antonio Tagle of Manila, Philippines, told about 150 World Youth Day pilgrims gathered in St. Joseph Church in the Bienczyce area of Krakow for a program on the Catholic Church’s international emergency relief and development program.

Acknowledging a small French contingent at the church, Cardinal Tagle offered words of condolence for the death of Father Jacques Hamel, 85, who police said was murdered July 26 while celebrating Mass in a Normandy church. His throat was slit by two attackers armed with knives.

“We ask, ‘Where is love?’ I’m sure it’s not just the French people (who are asking). All of us are asking what has happened to humanity. Where can we find the heart, the human spirit? Where is love?” he said.

The same question is being asked in Syria, where thousands of people are fleeing for safety and a better life every day, Cardinal Tagle said.

“I saw that question in the eyes of the young refugees in the camps. You could see in the eyes, the tears, the drive for a better life,” he said.

He encouraged young people to seek the answers that will bring love to a violent world. One way the cardinal suggested was to “get out, tell every stranger you meet that they mean so much to you.”

In response to a question about Caritas’ response to Syria’s war, Cardinal Tagle said the agency is one that has stood up to provide aid to internally displaced Syrians as well as those who have fled their homeland when nations have not.

“When governments of the world hesitate to respond and address the root causes of the conflict, conflict dares to respond” and worsen, he said. “People walk across mountains, take small boats. Caritas will be there to provide the necessities, food, clothing and shelter to provide a safe haven.”

He called peace “a gift of God.”

“If we can’t produce it then we need God to produce the peace we want,” he said.

The two-hour program was meant to introduce the work of the worldwide Caritas network to World Youth Day participants through young staff members and volunteers who offered a glimpse into their development and advocacy work.

Rose Sagna, project manager at Caritas Senegal, described her efforts to develop programs to help women start small businesses so that they can boost family incomes. Women are taught about budgeting, obtaining materials and investing for the future, Sagna said.

“The work with Caritas Senegal is to give an opportunity to women to learn what they really need and answer real needs,” she explained. “The goal is to build independence.”

In New Zealand, Caritas works with indigenous communities to give people a voice in matters that affect their lives, explained staffer Joanna Viernes. Young people are the focus of much of Caritas New Zealand’s work, she said.

Another staff member, Joe Moeono-Kolio, said that climate change is affecting islands off New Zealand and that the agency travels by canoe to remote communities to help them respond to higher sea levels and rising temperatures.

At CAFOD, the aid and development agency of the Catholic bishops of England and Wales, Daniel Hale, head of campaigns, described how he began volunteering with the organization long before he joined the staff. Similarly, young adults can join in the work of the Caritas network by joining advocacy and education campaigns and spreading word of the agency’s work on social and environmental justice in their parishes, he said.

“Our time is now,” Hale added. “Our planet and its people face monumental changes. We are the first generation to really understand climate change and the last generation who can do anything about it.”