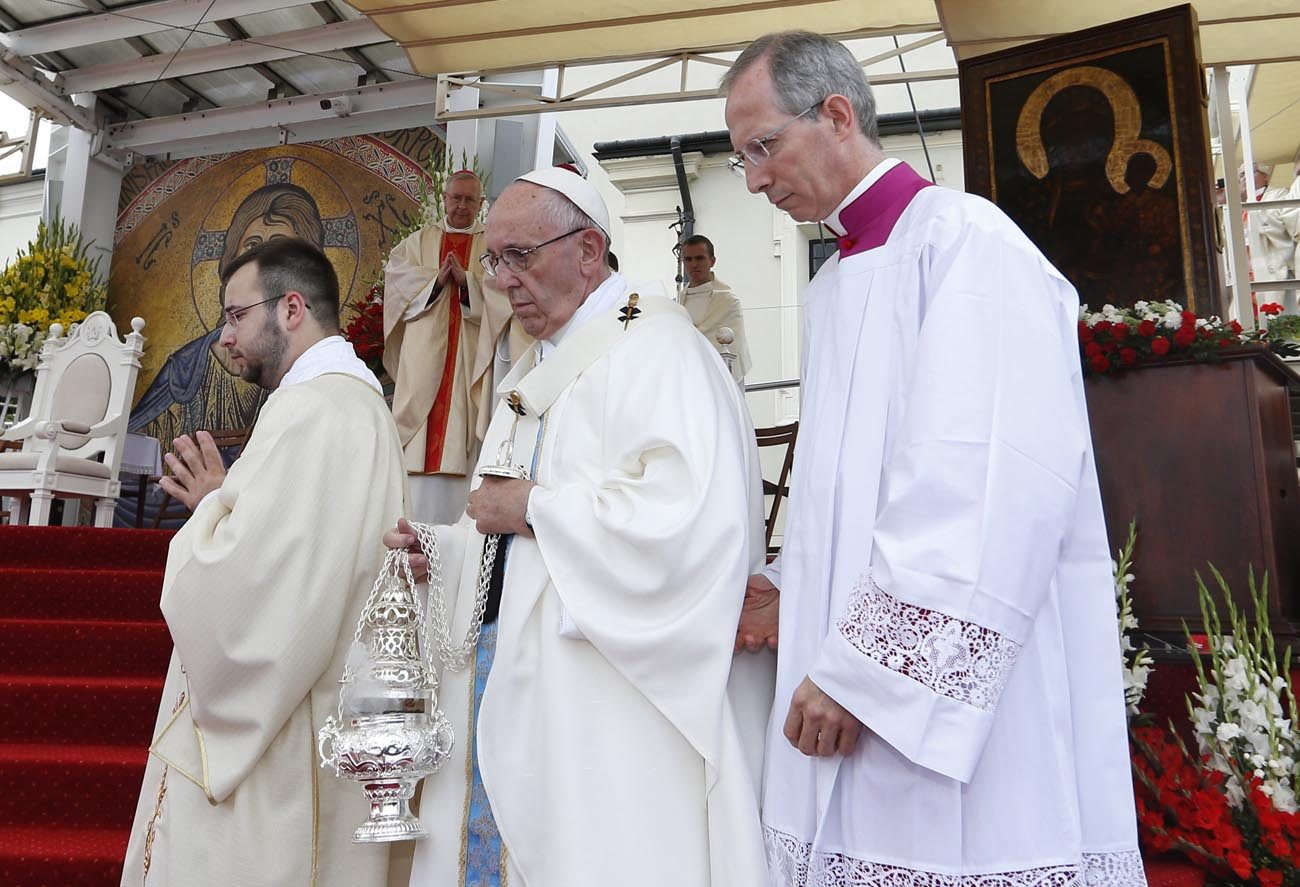 Pope Francis uses incense at the beginning of Mass to mark the 1,050th anniversary of the baptism of Poland near the Jasna Gora Monastery in Czestochowa, Poland, July 28. (CNS photo/Paul Haring)

CZESTOCHOWA, Poland (CNS) — God chose to manifest his power not by amazing feats of greatness but rather through small acts of humility, choosing to enter the world as a child born of a woman, Pope Francis said.

The Lord’s “humble love” is reflected throughout Poland’s history, particularly through “meek and powerful heralds of mercy,” such as St. John Paul II and St. Faustina Kowalska, the pope said July 28 at a Mass outside the Marian shrine of Jasna Gora in Czestochowa.

“Through these ‘channels’ of his love, the Lord has granted priceless gifts to the whole church and to all mankind,” the pope said.

The Mass marked the 1,050th anniversary of the baptism of Poland, which celebrates the Christianization of the country following the baptism of Mieszko I, the first ruler of the Polish state.

Prior to leaving Krakow for Czestochowa, the pope visited the convent of the Sisters of the Presentation and stopped at a nearby hospital to visit Cardinal Franciszek Macharski, retired archbishop of Krakow.

The 89-year-old cardinal, who is in “serious condition,” succeeded St. John Paul II as archbishop of Krakow following his election as pope in 1978.

With thick clouds gathered over the Jasna Gora Shrine of Our Lady of Czestochowa, Pope Francis arrived by car rather than helicopter, as planned. Jesuit Father Federico Lombardi, Vatican spokesman, said officials had told the Vatican it might not be safe for the helicopter to land.

In Czestochowa, hundreds of thousands of Poles lined the street leading up to the shrine, which houses the famed icon of the “Black Madonna,” traditionally held to have been painted by St. Luke the Evangelist.

St. John Paul had a special devotion to the famed image. After his election, the Polish pope visited the shrine on June 4, 1979, and entrusted his pontificate to Mary.

Pilgrims waving banners and flags anxiously awaited the arrival of Pope Francis who, like his predecessor and many Poles, shares a deep connection and reverence to Mary.

Viola and Evelina, two local pilgrims, journeyed with their families to the shrine hoping to catch a glimpse of “Papa Franciszek.”

“This is the first time I will see the pope; I have never been to a World Youth Day before,” Viola told Catholic News Service.

“It is very important for us to see and hear the pope, even if it was a long journey here to Jasna Gora,” Evelina said.

Viola also stressed that young people in Poland like herself are hoping for a “special word” and that the pope “tells us what we can do for our church.”

“Young people of Poland need the pope to show us what we can do with our lives and which roads can lead us to (a better) future,” Evelina told CNS, adding that young people are also hoping to learn “how we can live here in Poland with people from other countries.”

Arriving in the popemobile to the shrine, the pope made his way to the monastery that houses the image of the Black Madonna.

After the pope was welcomed by Father Arnold Chrapkowski, superior general of the monks of St. Paul the First Hermit, the image of Mary was slowly revealed with the fanfare of drums and trumpets.

The pope stood still, gazing at the Black Madonna in silence for several minutes before carrying a gold rose to the altar below the image. He was then presented with a gold chalice and a replica of the image, which he reverently touched and kissed.

Beginning the outdoor Mass, Pope Francis missed a step as he was blessing the altar and an image of Mary with incense. He stumbled and fell, but quickly was helped to his feet and continued the liturgy without problem.

In his homily, the pope reflected on the coming of God into human history not by a “triumphal entrance or striking epiphany” but rather in “the simplest of ways.”

“Thus, contrary to our expectations and perhaps even our desires, the kingdom of God, now as then, ‘does not come in a way that attracts attention,’ but rather in littleness, in humility,” the pope said.

Recalling the day’s Gospel reading, in which Jesus turns water into wine at the wedding feast in Cana, the pope said that Christ’s humility is again exemplified in “a simple miracle” that “brings joy to the wedding of a young and completely anonymous couple.”

Unlike the “tragically human” attraction to power and grandeur, God manifests himself and saves humankind “by making himself little, near and real,” the pope said.

Christians are called to reflect God’s closeness by “radiating goodness through the transparency of our lives,” he said.

Poland’s history, he stressed, is marked by occasions in which God has taken them by the hand and “accompanied you in so many situations.”

“That is what we, too, in the church are constantly called to do: to listen, to get involved and be neighbors, sharing in people’s joys and struggles, so that the Gospel can spread ever more consistently and fruitfully,” the pope said.

Pope Francis also noted that Poland’s history is a testament to God’s real presence, the “contagious power of faith” and devotion to Mary.

As she did in Cana, the pope continued, Mary offers her presence and counsel in order to “avoid hasty decisions and grumbling in our communities.”

“May each one of us be able to make an interior passage, a Passover of the heart, toward the divine ‘style’ incarnated by Mary. May we do everything in littleness and accompany others at close hand, with a simple and open heart,” Pope Francis said.