Italians finish restoring mosaics in Bethlehem’s Church of the Nativity 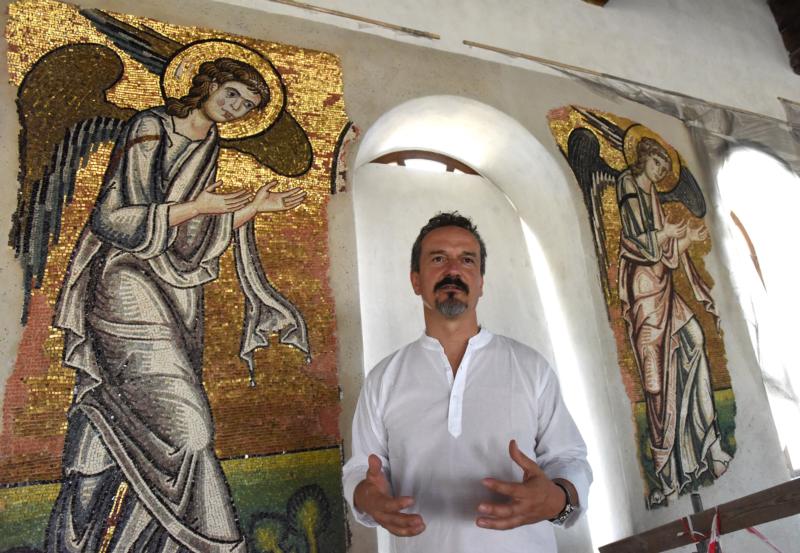 Giammarco Piacenti, CEO of the Piacenti restoration center, stands in front of angel mosaics in the Church of the Nativity July 5 in Bethlehem, West Bank. Restoration specialists from the center completed their work in June. (CNS photo/CNS/Debbie Hill)

BETHLEHEM, West Bank (CNS) — An Italian team has completed restoration of Crusader-era mosaics in the Church of the Nativity, but the mosaics will only be unveiled publicly after work on lighting, electricity and the fire alarm system is also finished.

The work involved removing the layers of centuries-worth of soot and dirt — a result of the smoke of candles lit by pilgrims coming to venerate the site traditionally believed to be the birthplace of Jesus — from about 1.55 million tiny mosaic pieces that were reviewed and restored.

“I think all the churches want to save this church because here Jesus was born,” said Giammarco Piacenti, CEO of Piacenti restoration center, which began work on the church starting with the rotting wooden roof in April 2013. “It is important for all Christianity. For my professional life, this occasion is incredible.”

Only 1,400 square feet of mosaics remain from the original 21,58 square feet that adorned the wall, he noted. The others were destroyed by rain leaking through the roof, he said.

Made of stone, mother of pearl, and glass and gold leaf, the mosaics portray different scenes in the life of Jesus and the church, including the disbelief of Thomas, the Assumption and Jesus’ entrance into Jerusalem on a donkey.

Piacenti said the mosaic of the disbelief of Thomas shows the date of 1155 and the names Ephraim and Basilius, presumably artisans who created the work. Some pieces of the mosaics remain missing and will not be replaced, he said, based on the theory of restoration that there should be a minimum of intervention on any piece.

“Really, it is only conservation,” he said. 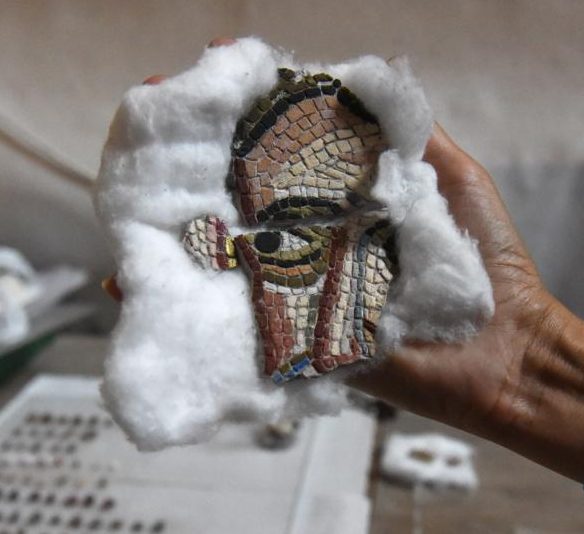 A face that will be part of a restored mosaics is shown in the Church of the Nativity July 5 in Bethlehem, West Bank. Restoration specialists from the Piacenti restoration center completed their work in June. (CNS photo/CNS/Debbie Hill)

One special moment came when restorers cleared away plaster from the wall bordering the roof in the main section of the church and discovered a seventh mosaic of a golden angel, in addition to the six they already knew existed. The angels’ arms gently direct pilgrims toward the grotto traditionally thought to be the site where Mary gave birth to Jesus.

During the Ottoman Empire, the angels’ faces were disfigured with gunshots to the nose and so here the missing pieces have been replaced, said Piacenti.

“They were shot in the nose to destroy, to kill them,” Piacenti said. Restoration gave them “a second life.”

The Church of the Nativity is shared by the Franciscans, and the Greek Orthodox and Armenian Orthodox churches. It is governed by the traditional Status Quo, the 1852 agreement that preserves the division of ownership and responsibilities of various Christian holy sites.

In years past, the denominations have been known to jealously guard over their sections of the church, to the extent of fist fights breaking out over who could clean which part of the stone floor.

Relations among the churches have become progressively more cordial over the past decade, and the three churches were able to come together under the auspices of a special committee formed by the Palestinian National Authority. Through joint discussions they reached a working agreement permitting the much needed restorations on the Church of the Nativity to begin.

The different denominations have come to similar agreements in the Church of the Holy Sepulcher in Jerusalem, allowing for restoration projects to begin there as well.

NEXT: Attack on minor seminarians sparks outrage in Venezuela