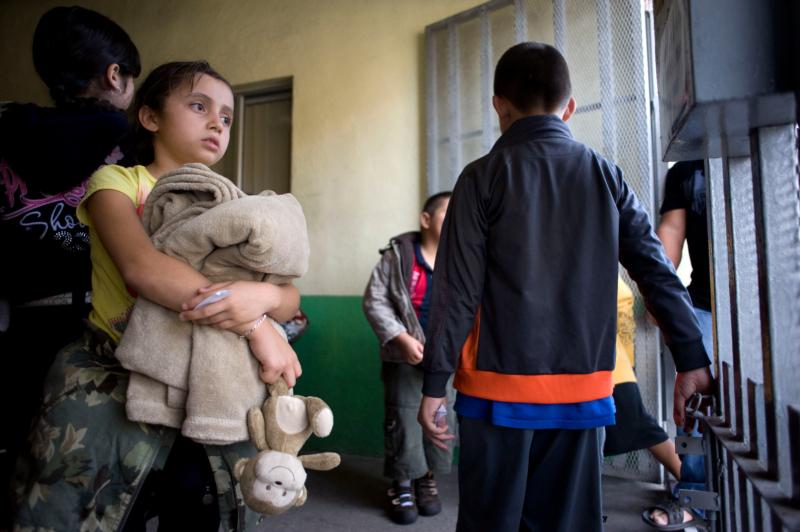 A young girl holds her belongings as she waits with a group of Mexicans preparing to leave the Casa del Migrante shelter June 8 in Tijuana, Mexico. (CNS photo/David Maung)

Since late May, more than a thousand people have shown up from countries around the world. Haitians, Ghanaians, Hondurans, Salvadorans and people from many other countries have fled economic or political instability and violence to arrive at the doorstep of the United States to ask for refuge. As they wait for the backlog of applications to be processed by U.S. officials, migrants have been taken in by Tijuana shelters usually used to house deportees.

Gilbert Fieffe, with high cheekbones and large brown eyes, wore a worried expression as he waited to apply for a visa. In early July the 31-year-old Haitian accountant arrived in Tijuana with little money and no place to stay. A sympathetic taxi driver dropped him at the shelter.

“The situation (in Haiti) is very bad,” said Fieffe. “It’s very bad. So I haven’t got a lot of choice.” Getting robbed and seeing bodies in the streets is so commonplace that it is now unremarkable, he said.

“If I don’t feel safe in my home country, if I can find somewhere I can feel safe, I can find a better life,” he said.

Ernesto Mejilla is 29, but looks much younger. His good humor dissolved into worry when he was asked why he left Honduras.

“Gang members were asking me for money,” he said in rapid-fire Spanish. “A week later, they threatened me with guns. I tried to talk to them, but they told me that they would kill me and my family. Last month, my family ran … and, thank God, I escaped and ended up here. I want to go to the United States, because I feel like I might be safe there.”

He was tending to a little girl at the Desayunador Salesiano “Padre Chava,” a shelter that generally tends to migrants and deportees but now is taking in refugees as well. The shelter — like most in the city — depends entirely on donations, said its director, Salesian Father Jesus Arambarri.

“In a big part, this is a story about Haitians,” said Father Arambarri. “It’s historic. This migration is unprecedented.” People have been fleeing by the thousands, he said, hoping to escape the lack of infrastructure and stability in the country. They’re joined by others on the long journey north to the United States.

Nobody knows exactly how many people are taking the long roads from Africa, South and Central America, and Europe, but the flow of people from countries across the world shows no signs of stopping — and each hopeful person seeking refuge at the United States’ southern border says there are thousands more behind them.