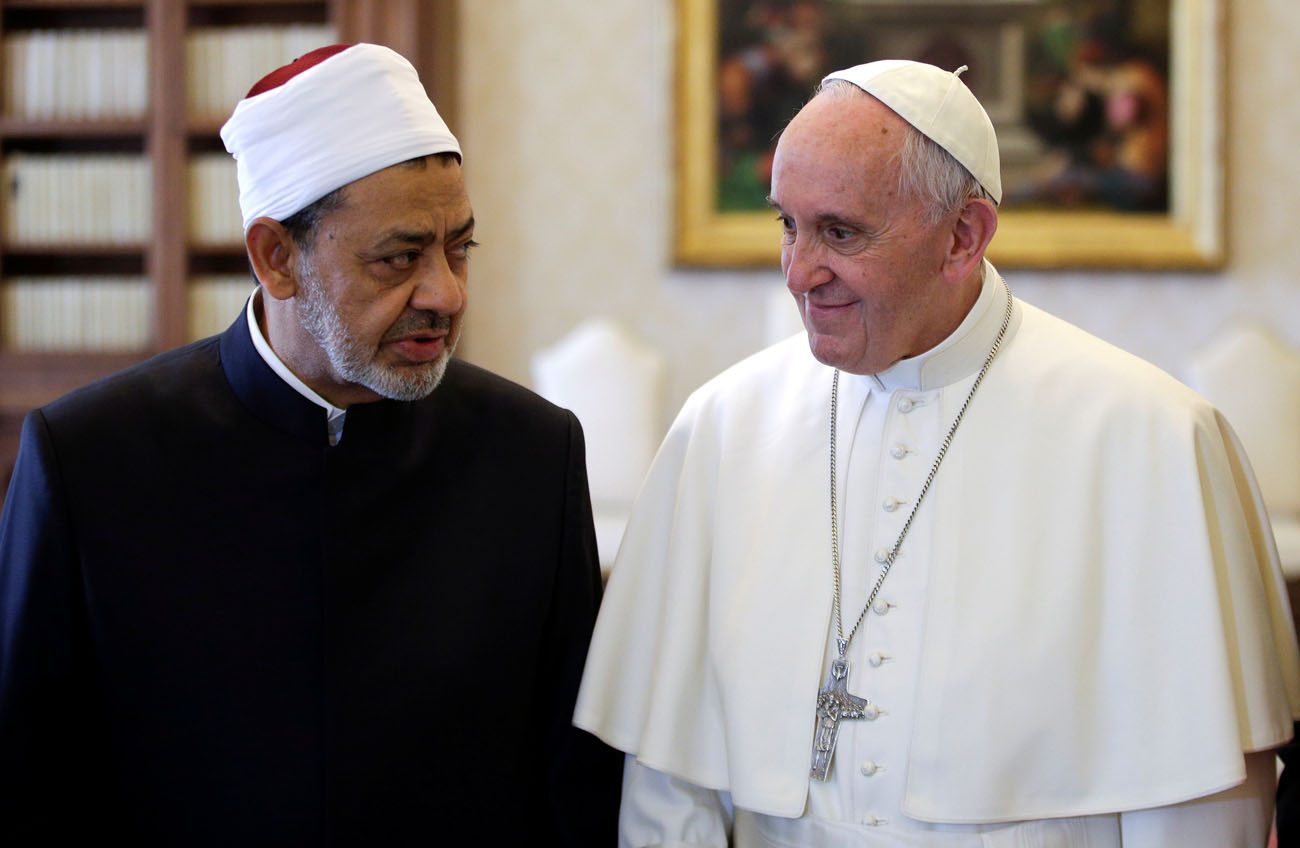 Pope Francis talks with Ahmad el-Tayeb, grand imam of Egypt's al-Azhar mosque and university, during a private meeting at the Vatican May 23, 2016. The Vatican and Sunni Islam's leading institution of higher learning have begun looking for ways to restart formal dialogue. Pope Francis has accepted an invitation from Egypt's president and top religious leaders to visit Cairo April 28-29.(CNS photo/Max Rossi, Reuters)

Acting on Pope Francis’ expressed desire, the Pontifical Council for Interreligious Dialogue was sending a top-level official to Cairo to visit al-Azhar University, the council said in a written press release July 12.

Spanish Bishop Miguel Ayuso Guixot, secretary of the pontifical council, will attend a “preliminary meeting” July 13 with Mahmoud Hamdi Zakzouk, a member of the university’s Council of Senior Scholars and director of the al-Azhar Center for Dialogue. Archbishop Bruno Musaro, the apostolic nuncio to Egypt, was to also attend the meeting.

The meeting, which was requested by the pontifical council following the pope’s “expressed desire, will evaluate how to begin the resumption of dialogue between the Pontifical Council for Interreligious Dialogue and al-Azhar University,” the press release said.

The encounter follows the landmark meeting at the Vatican May 23 between Pope Francis and the university’s grand imam, Ahmad el-Tayeb.

It was the first meeting between a pontiff and a grand imam after five years of tension and top-level silence since the Muslim university in Cairo suspended talks in 2011.

Established in 1998, the formal dialogue between al-Azhar and the Vatican started to fray in 2006, after now-retired Pope Benedict XVI gave a speech in Regensburg, Germany. Al-Azhar officials and millions of Muslims around the world said the speech linked Islam to violence.

After the papal meeting in May, el-Tayeb told Vatican Radio and the Vatican newspaper that his impression of Pope Francis was that “this man is a man of peace, a man who follows the teaching of Christianity, which is a religion of love and peace,” and “a man who respects other religions and shows consideration for their followers.”

Al-Azhar is considered the most authoritative theological-academic institution of Sunni Islam.

Some hope a renewed relationship between al-Azhar and the Vatican will lead to new cooperation in addressing urgent questions of citizenship that embraces religious and cultural diversity and how to counter extremism.

Maronite Father Fadi Daou, chairman of Adyan, a foundation for interfaith studies and spiritual solidarity based in Lebanon, told Catholic News Service in May that “al-Azhar has been working for … years in the direction of new Islamic positions concerning state, religion and politics and diversity.”

“Collaboration with the Vatican on this level can only add to the weight of the positions promulgated by this most important Islamic Sunni authority worldwide,” he said.